SALT LAKE CITY — The best way to describe the story of The Distance of the Moon is as a modern myth for adults. Like an ancient Greek myth, the story is infused with magical occurrences and fantastical characters. However, The Distance of the Moon (with a script composed of pieces of Italo Calvino’s original short story and additional writing by Morag Shepherd) also shares some of the flaws of myths, including the flat characters and a story that progresses just for the sake of telling a story. 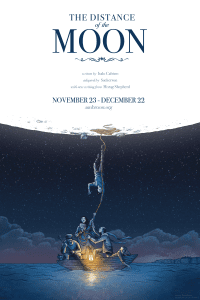 The action takes place in a distant past when the moon was close enough to the earth that people could climb to it as it passed by in its orbit. A small band of seafarers regularly do so in order to collect resources from the moon, mostly milk and cheese. But in one attempt, two members of the party tumble onto the moon and face difficulty gathering milk, returning to earth, and even understanding themselves.

Jahnavi Alyssa plays Qfwfq, the principal narrator of the story, with youthful energy. Her opening monologue set was full of memory, grace, and excitement as she talked about the characters’ lifestyle eons ago. The rhythm of Alyssa’s voice and the exuberance of her words meshed well with Breeane Saxton’s choreography.

Saxton’s work is the most memorable aspect of the production. She created movement that perfectly mimicked the undulations of the ocean as the characters traveled by boat to travel to the moon. Saxton made full use of an ingenious boat (designed by Madeline Ashton), which consisted of a rectangular grid resting on a curved wooden piece. Not only did Saxton teach the cast to rock back and forth on the boat in a convincing manner, but she also added movements (like trading positions,  that kept me riveted on the action: had them trading positions, rowing, and balancing precariously while standing. 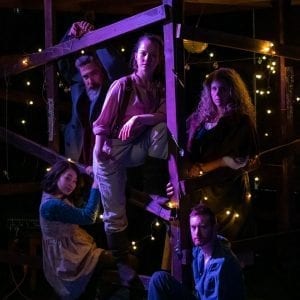 Director Dave Mortensen succeeded in creating a mystic feel to the show that was almost hypnotic in the way that movement, character, sound (designed by Shawn Francis Saunders), and language melded together seemlessly. However, after Qfwfq and The Captain’s Wife (played by Elizabeth Golden) arrived on the moon, the sublime mood was shattered. At this point, the play veered into a story of unrequited love and disposed of the theatrical elements that made the first part of the play so intriguing.

One reason why the scene of Qfwfq and The Captain’s Wife on the moon was so unsatisfying was because the story structure of myths is not conducive to creating characters that have a real, emotional existence. I was no more able to become emotionally attached to the characters in The Distance of the Moon than I can connect with Icarus, Daedalus, Echo, or Narcissus. Like the characters in a myth, the characters in The Distance of the Moon‘s actions are driven solely to tell the story. This is forgivable in literature, but it is unsatisfying to watch actors in an intimate setting perform roles without any depth.

Still, the actors were able to create moments that I found charming. Golden’s resistance to Qfwfq’s advances were emphatic yet avoided cruelty. She also contributed to a moment that I relished when The Captain’s Wife and Captain Vhd Vhd (played by Mark Fossen) listed the ingredients of moon milk. Fossen’s captain had a grizzly voice that punctuated the more melodic voices of the female cast members. Graham Brown as The Deaf One (Qfwfq’s cousin) created many beautiful moments with the movements of his body, such as when his character retrieved moon milk, and when he slunk through the bowels of the boat as Captain Vhd Vhd paddled it. Finally, I enjoyed Samantha Matsukawa‘s performance as Little Xlthlx, especially when she scurried up the ladder (made from the upper portion of the boat) and in the aftermath when she needed to recover from her trip.

If The Distance of the Moon were solely a dance-infused avante garde theatre piece, or if it were only a character study of two women, the play might work better. But by having an abrupt shift from one genre to another, the play lacked unity and often meandered aimlessly from scene to scene. Moreover, I am at a loss to understand why this story needed to be told on stage at all. (I am completely unacquainted with the original short story, though.) The Distance of the Moon has its majestic moments, but these were not consistent enough to support a 75-minute play.

Full disclosure: The director of this production (Dave Mortensen) is the founder of Utah Theatre Bloggers Association and a member of its board of directors. As a board member he is in charge solely of the technical functioning of the web site. Mr. Mortensen had no involvement with the writing or editing of this piece. Honest criticism was encouraged.