SALT LAKE CITY — University of Utah’s production of Big Love, written by Charles L. Mee, was an interesting experience. The themes of women’s oppression and the “me too” movement were rampant throughout the show. It went into depth about the struggles men have based on social gender training, as well as women’s experiences with the demands society makes of them.

As the show started, one woman in a wedding dress comes onstage and strips to bathe in the fountain of a mansion’s back patio. As more women enter, the audience learns that the women have run from an arranged marriage, 50 women to 50 men, and come to seek refuge at their uncle’s house. The uncle claims he will help, but when the men arrive and negotiate for their brides-to-be, the uncle caves in and refuses to get in the way, lest his family be at risk.

I was intrigued by many of the choices Robert Scott Smith made in directing this play. He added a song for the uncle’s youngest son, Guliano, played by Jacob Weitlauf, singing “Ave Maria” in drag. It broke up the horrid moment of the girls being forced to marry and brought some peace into the show that resonated from the fact that Weitlauf’s character wasn’t forced by either gender role to be or do anything by society. The freedom portrayed in this character was refreshing. I also liked how Smith used dim lighting during the vulnerable moments for actors onstage. 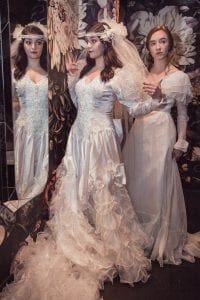 Mee’s dialogue was often tricky to understand as it seemed to switch between old 14th century speaking and modern slang, but I think he was able to mesh the speech in a way that added to the hilarity, like when the girls are speaking their frustrations about their situation in the more proper speech and then the sing the popular song “You Don’t Own Me.” Smith also had some scenes where the women were all talking at once together or the men on stage were talking over each other in a jumble and at the end of everyone talking, the last person finished with a hilarious line the character didn’t think everyone was going to hear. The awkwardness that ensued when the other characters were judging them was hilarious.

The set (designed by Thomas George) had a beautiful look to it. It covered the entire stage platform and back wall with what looked like the back side of a mansion and outer patio. The entire surface was covered in lovely tiles and the back fountain was used for many scenes in a variety of ways that was fun. I liked how George set a huge white translucent curtain nearly center stage and how Smith used the curtain falling at the beginning to create a mood of vulnerability. I also enjoyed the use of lighting by Michael Horejsi, as it gave a softer glow for the women when they were being and talking more feminine and the strong, reds and harsher lighting when they were angry.

K. L. Alberts created some amazing costume designs. Creating so many wedding dresses is a job for someone brave. I loved how the dresses at the beginning were all muddy and as the women began “ripping” of hunks of them in rebellion; it looked amazing to see them go from huge with ruffles, down to simple and easy to manage. My favorite dress was definitely Guliano’s for “Ave Maria,” and it had lovely little beaded strings hanging down all over the bodice which sparkled in the lighting, giving off an ethereal look. The men’s costumes for the helicopter scene were also very funny, with their helmets and black jumpsuits, which perfectly created the Mission: Impossible look. 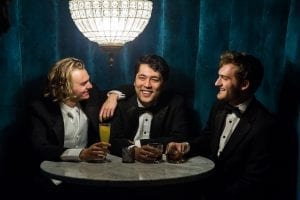 Chris Duval was the fight choreographer, and the scene was scary, which means his tactics worked. The chainsaw couple was my favorite, mostly because the shortest girl was given the most powerful weapon, and I also loved the use of bright red shredded fabric as the blood, sometimes covered in sparkly red sequins. I’m guessing Alberts was behind this, perhaps working with Smith and Duval. That choice made the fight scene much more hilarious than scary and creepy, which it totally was, but because it looked so funny, it was okay for me to enjoy.

Smith is an excellent actor. (I’ve seen him do an amazing Joseph Smith in Saturday’s Voyeur.) So, I was surprised how poor the acting was overall in Big Love. Some actors lacked focus necessary to pull off a meaningful performance. For example, I often saw swaying side to side during speech and eyes looking in a direction that didn’t make sense to what the actor was saying. Screams sometimes didn’t match the situation, as the reaction happened because it was supposed to and not because it came naturally from the character. One male actor laughed at himself out of character.

Additionally, I rarely saw an arc or change for any character; they nearly all remained stagnant throughout. For example, Thyona (played by Morgan Werder) stayed intensely angry throughout the show. I wanted to see Thyona come to an understanding and maybe even experience some healing. But she finished in despair, which could have the appearance of disempowering the character. However, Mary Nikols was an exception to the static performances. She played Olympia, a character who went from being ditsy and opinionated (but reasonable) to hating herself for her actions.

Aside from Weitlauf’s amazing resonating singing voice, and some a few moments of good comedic timing, I couldn’t enjoy the performances of Big Love. The theme of the play (which is that love can free people from violence) was obvious and portrayed as a cliché the way it was portrayed. Yet, it still failed to resonate, which makes the whole show pointless. There are plenty of interesting moments in Big Love. But audiences need to know what to expect if they choose to see the show.