Christ is in Christmas at HCTO’s A CHRISTMAS CAROL 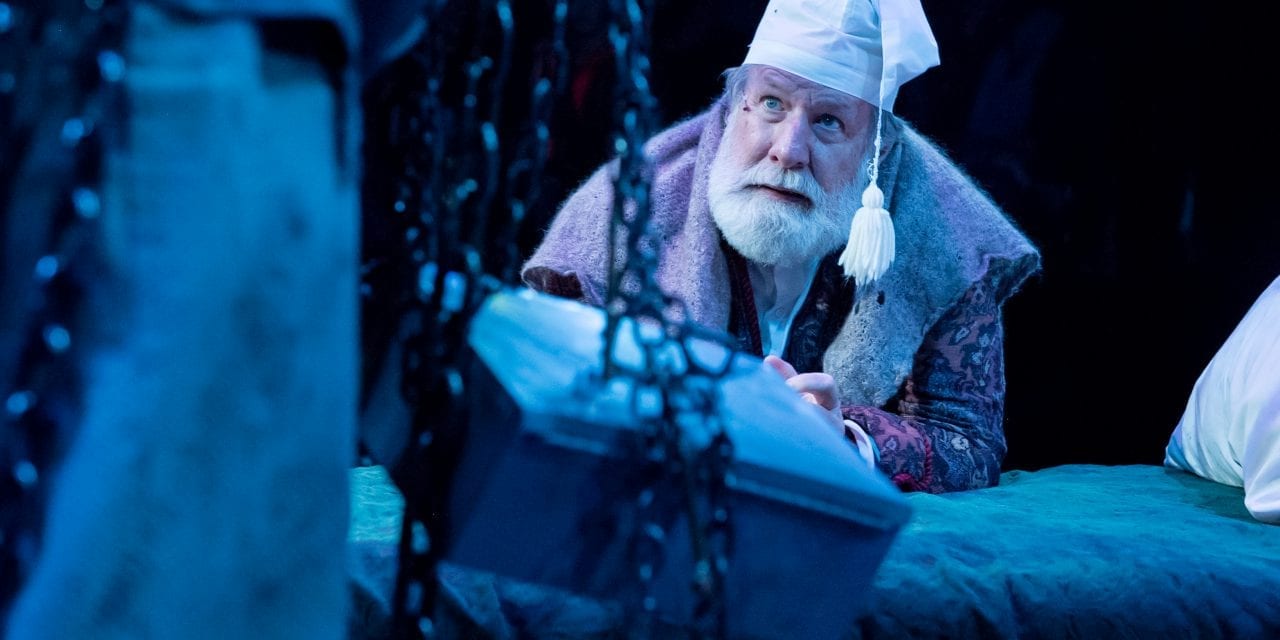 OREM — It’s been years since I have seen A Christmas Carol at Hale Center Theatre in Orem, and this season’s production, directed by Jerry Elison, was even better than I remembered.  The Hale has taken Charles Dickens’s well-known tale of Ebenezer Scrooge and in Ted Lehman’s adaptation and added plenty of humor and a good dose of (seasonally-appropriate) religious gravitas.  This well-constructed play, combined with the Orem Hale’s impressive production elements and Cody Hale‘s music, make A Christmas Carol the perfect way to enter the Christmas season.

While the story is well known, the play’s construction and Elison’s direction have embedded within this Christmas production constant pointers to the original Christmas story.  The beginning of the play is dark, visually and dramatically.  The Christmas carol “God Rest Ye Merry Gentleman” is the opening number, and ironically so.  No one is merry, and no one seems at rest with destitute beggars asking for a pittance from the elegant upper-class carolers and repeatedly refused.  The play continues with an element of sad but hopeful waiting for Christmas day to arrive. And though throughout the play Scrooge (played by Chris Brower) sees a multitude of people that do live with the unbridled joy of Christmas, he remains unhappily trapped in his own self-idolatry until the last ghost visits him and he is thrust back into the world of reality, having learned hard lessons. It is then that Scrooge, himself, takes up a solo of “God Rest Ye Merry Gentlemen.” Alone on stage, with one candle lit, he sings to the line in the song: “Remember Christ our Savior was born on Christmas day to save us all from Satan’s power when we had gone astray, Oh tidings of comfort and joy.”  It is clear that Scrooge believes Jesus Christ was born to save him, personally, along with the rest of mankind.

In other times, too, traditional Christmas carols are used in the play to pay homage to the meaning of Christmas.  When Bob Cratchit’s family visit Tiny Tim’s grave during a scene from the Ghost of Christmases yet to come, Bob sings “What child is this?” while looking down at the grave of his child, the implication of which is that Christ came down from heaven into a very human and very vulnerable form. The religious currents running through A Christmas Carol at the Hale in Orem would be very much appreciated by Christian believers during one of their holiest seasons of the year, a season so often hijacked by secular materialism. 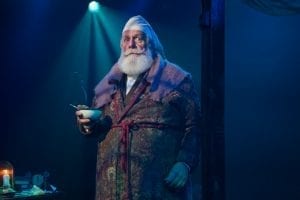 That said, the direction, acting, and production elements of this play are so stellar that there is plenty of enjoyment to go around, so non-believers need not fear.  Elison’s direction is clear, quick moving and impactful. Brower plays Ebenezer Scrooge to a T, with a definite character arc from beginning to end, comic timing that is impeccable, an expressive physicality that is a joy to watch, and a gravity that grounds the play.  He is joined by an energetic ensemble cast with an especially- stand-out performance by Kellan David Connolly, who played Bob Cratchit. Connolly played a sympathetic, good-natured Cratchit and gave an impressive solo of “What Child is This?”.

I must also mention the children in the cast.  Not only did they act with professionalism on stage, but their mere presence is a reminder of what we hope for Christmases in the future. In a way, the kids on stage were joined by the kids in the audience.  The Hale Center Theatre in Orem is a theatre-in-the-round, so the audience is visible to other audience members.  This set-up becomes meta-theatrical (and other humorous meta-theatrical moments are included in the play), and this reminder of the shared experience in the theatre also gives a reminder of shared experience in life, sending the message of the play even deeper into the audiences’ psyche.

Theatre-in-the-round staging is typically limited in what can be accomplished for set design, but the set design by Cole McClure and the lighting design by Cody Swenson are creatively effective.  The designers utilize the whole theater so that the walls painted to look like stone bricks behind the audience members become part of the design.  The projections transform these walls and windows into different places and buildings in an instant between scene changes, and what little furniture and props that are used are minimal but detailed to give impression of the various times and locations.  So, too, the turning stage and trap door are practical and visually-impressive elements that assist audience viewing and bring exciting elements to the playing space.  The sound design, also by McClure, similarly adds to the other-worldly experience of the play.  Finally, McClure’s period costume design is perfect, counteracting the pervasive sense of austerity in the play with lavish colors and the intricate detail of the garments worn by the characters.

There is a reason why A Christmas Carol at the Hale Center Theatre in Orem is a holiday tradition for many families.  It is a quality drama with depth and meaning, stellar acting, and shining production elements.  It’s also worth noting that it is very easy to attend for families. There are multiple production dates and times, it is easy to get to, easy to park at the theatre, and the theatre is small enough that there are seemingly no bad seats.  I’ve already decided I’m going to attend next year.

A Christmas Carol plays daily (except Sundays) at 5 PM and 8 PM through December 22, with 2 PM performances on Saturdays (starting December 8) and December 20 and 21 at Hale Center Theater (225 West 400 North, Orem). Tickets are $14-24. For more information, visit www.haletheater.org.