SPANISH FORK — Another new work written and composed by Tony Cobb has been welcomed by the historic Angelus Theater in downtown Spanish Fork: Tristram and Isolde the Musical. Under the direction of Ruthie Higley, this was an upbeat musical performance, with some quirks, but fit for the whole family and a wonderful example of community theater.

The story, though new in its details, is a familiar one — it is a tale of a love potion and a love triangle. Taking place somewhere in Europe, two kingdoms come together through a marriage that lacks true love. With warriors and princesses and enemies of war, the drama ensues in a series of scenes that include everything from line dancing to sword fighting on battlefields.

There wasn’t anything super outstanding in the plot, but it was enjoyable overall. However, I became confused eventually (spoiler alert) when the cyborg robot bat entered the scene, something that didn’t seem to tie into the story at all. This was just one of the things that also made the time period confusing — at points, it seemed like I was watching the plight of ancient monarchies; but then, in the very next moment, guns were being shot and sleeveless hoodies were being worn.

Half of the costumes, designed by Erin Cobb, seemed modern, while the other half were ancient. This added to the time period confusion; nevertheless, there was obvious effort and skill in the creation of these costumes. With assistance from Thomas Merrill and Nellie Myatt, there was a wide array of outfits that were put together — from Isolde’s intricate, green gown with black lace to King Mark’s bedazzled shoes, basketball shorts, and top. The variety did keep things interesting and (often) surprising. The lights on the cyborg costumes were one especially impressive costuming touch. 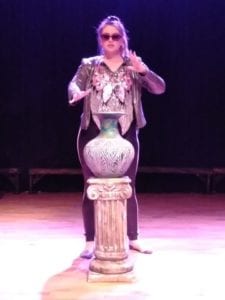 Another important component of this production was the movement, created by the dance and fighting choreographers. Alex Jordan (who also played Tristram), Hannah Cobb, and Rebecca Cobb choreographed the dance numbers for Tristram and Isolde. I was highly impressed with the use of the entire stage and the variety in movements that were always interesting, exciting, and—on occasion—hilarious. Jordan was also responsible for the fight choreography, and worked with fight director Adam Rasmussen. I was blown away at the level of intricate stage fighting that I have never before seen at the community theater level. It felt dangerous, real, and looked phenomenal onstage.

Lighting designer Nathan Nordin also did excellent work that I do not want to go unnoticed. Lighting seemed to fit the mood for most scenes, such as the envious green lighting during Princess Dunoweth’s first act song, expressing her emotions after finding out that the man she loves is interested in someone else. I also loved that each time Tristram and Isolde saw each other in a new scene, there would be a brief flash of light that reminded me of the flashes that accompanied their initial falling-in-love moment. It was obvious, however, that the lighting technician did not know the cues near the end of the show. Within a period of ten minutes, the lights went off four or five times as though the scene was to end — but it was not over for a while.

The musical composition was definitely the highlight of the show throughout the performance. With 1980s and 1990s vibes to each of the numbers, Tony Cobb has a talent for lyrics. Not only were the words matched perfectly to the medley of musical styles presented, they were also catchy, moving, and (usually) important to the story. I especially loved the rounds in the song about being at war with one’s heart, sung amazingly by the characters Isolde, Princess Dunoweth, and Tristram. I do wish that the ensemble was invited to provide backup vocals in more of the songs at the start of the first act, though.

There were many talented, local performers who brought this new musical to life, and I wish I could name them all. Sami Orme Nordin, who played the role of Isolde, had a beautiful, airy voice, and was able to express true and convincing emotion as she sang. Chelsea Tramell, who played Princess Dunoweth, had powerful vocals in each of her songs (such as “Necessary Evil”) and successfully portrayed a wide variety of emotions with inflections in her voice and body language. Michael Mehner, playing King Mark, had a wonderful, bellowing voice and commanded the stage whenever he was present. Jeffrey Rawlings, who played Gareth, was always the perfect source of comedic relief in the story, and even had an impressive and fun rap song. Finally, Matthew Delafuente, who played Burk and a Saxon Guard, had hilarious accents and incredible dance moves.

All in all, Tristram and Isolde was a classic community theater production. The talents of many working together produced a fun new show that filled the stage at the Angelus Theater. Support local performers and artists by catching a performance of this entertaining musical.

The Cobb & Co. Theater produciton of Tristram and Isolde the Musical plays Mondays, Fridays, and Saturdays at 7:30 PM at the Angelus Theatre (165 North Main Street, Spanish Fork) through March 21. Tickets are $7-40. For more information, visit www.cobbcotheaterproductions.com. 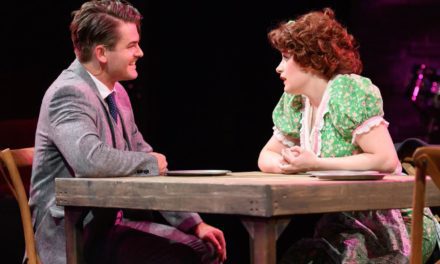 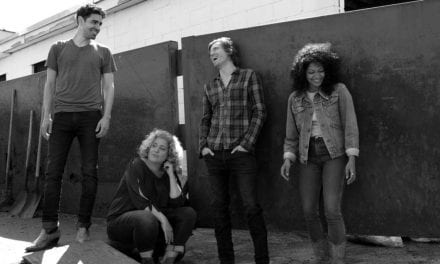