Henry VI, Part One told the story of a phase of the Hundred Years’ War that was not favorable towards England. Shakespeare’s attention turns more toward domestic politics in Parts Two and Three of the series. In these plays, the War of the Roses, a civil war between the Lancaster and York families, is the topic of action. Both plays serve as a cautionary tale about the danger of unlimited personal ambition and how it destabilizes society. These two plays also serve as the foundation for Richard III, where ambition crosses the line into pure evil.

Henry Woronicz directed Part Two in much the same way he directed Part One. Both plays were staged very traditionally and with blocking choices that made Henry VI almost a spectator in his own kingdom. Often sidelined from the main action in the center of the stage, Woronicz had Henry’s underlings and queen decisively move about the stage and confront one another while the hapless king watched. Little moved Henry, except the mention of treason. The first three acts of Part Two are a talky political drama, but Woronicz clipped through them quickly without losing any important information about the War of the Roses. Woronicz was especially good at the scenes involving the rebel Jack Cade (played by Dan Kremer), which showed Shakespeare’s disdain for the uneducated masses and highlighted Cade’s buffoonery. The transitions between the court of Henry VI and the empty promises of Jack Cade (including an especially clever way of using some of the actors in the mob as messengers to the court) were ingenious. Moreover, the battle scenes (by fight director Paul Dennhardt) were a rousing conclusion to the first half of the production. 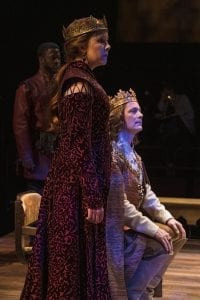 And then Part Three happened. After the 30-minute intermission, the production took a radical, nonsensical turn. Woronicz cut the story loose from its late medieval setting and had the scenes take place in progressively later time periods, from the early 20th century to today. He mostly did this time period shift through gradual modernization of the costumes (designed by Lauren Roark). As a result, the invigorating battle scenes of Part Two were replaced, by the end of Part Three, with actors holding guns and striking choreographed poses as a helicopter sound effect blared through the speakers and bright spotlights shone down from above. The effect was totally empty, and I even laughed at one pose that looked more like an action movie poster than any real skirmish. These battle scenes abrogated the sense of danger and history that had built up over the previous two plays.

Henry VI is Shakespeare’s weakest king, and Jim Poulos was superb at showing the king’s inadequacies. Poulos gave Henry soft, careful steps, and the gentleness of his voice showed why the nobles would think that they were able to overthrow him. In Part Three, when Henry tried to justify disinheriting his son, he turned into a sniveling coward in the face of the wrath of Queen Margaret. Another illuminating moment occurred in Part Two, when Henry reminded his entourage, “Blessed are the peacemakers.” It was one of Henry’s most animated moments, and the sincerity that Poulos gave the line showed Henry’s naiveté that a few words of scripture would be enough to assuage a political conflict.

Queen Margaret is Shakespeare’s first fully developed and believable villain, and Stephanie Lambourn was a powerful force who took charge of whatever corner of the stage she was in. Lambourn was a firebrand, and I admired the forcefulness of her voice and the way she showed Margaret’s dominance when confronting the men at Henry’s court. One highlight occurred in Part Two when Margaret raged at her husband while Henry cried for Humphrey’s death, prostrate on the ground. It was a moment that perfectly encapsulated the line that Margaret had a “tiger’s heart wrapped in a woman’s hide.” In Part Three, Lambourn had a delicious moment where Margaret reveled in telling York that his son had been murdered. 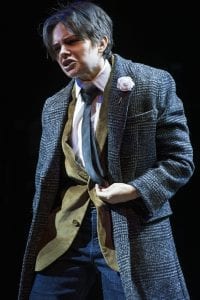 One of the leading characters of Henry VI, Part Three is the future Richard III (played by Emelie O’Hara) who has a growing thirst for power that provides important backstory for the character’s treachery in Richard III. O’Hara embraced the evil of the character and did her best to spit her words in the cruelest manner possible when confronting Richard’s enemies. Her best scene was when her mischievous smile and flattering words spurned Richard’s older brothers to continue the battle for the throne. However, O’Hara lacked the cold malevolence of Richard and rarely showed him enjoying the evil he engaged in. She played the little brother part of the role well, but she seemed miscast when the character had to be physically intimidating. It seemed unlikely that an actress so diminutive in size could strike fear in battle-hardened soldiers.

A more rewarding casting choice was Michael Elich as Richard Plantagenet, the Duke of York, father to Richard and his brothers (including Edward IV, the victor of the War of the Roses). York was one of the main instigators of the civil War, and Elich was adept at showing York’s disdain for Henry VI’s weakness in the political scenes in Part Two. Elich was also the best in the cast at handling the asides. The pathos that he evoked when York mourned for his murdered son Rutland (played by Zak Houston) and asked for death was the most moving scene in Part Three.

There were other actors with memorable performances. The tender scene between Eleanor (played by Sarah Shippobotham) and her husband Humphrey (played by Dan Kremer) was a lovely scene showing a mature, practical marriage. I was delighted when Shippobotham came back in Part Three as Edward IV’s queen, because of the dignity that Shippobotham gave the role. I hope that she returns in Richard III to play the indomitable Elizabeth. Landon Tate Boyle was a memorable Lord Clifford, and Boyle’s as Clifford’s thirst for revenge had a visceral rawness that made Clifford a compelling minor character. 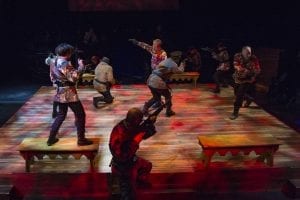 This excellent cast, though, is hobbled by the problems in the script. In my review of the Festival’s production of Henry VI, Part One, I commented that the script was weak, and that criticism still applies. Shakespeare’s talents as a playwright mature as the series progresses, but he is still far from the heights of his abilities. In Part Two, only Queen Margaret is a fully developed character, though Henry VI himself has more dimension than he did in Part One. In Part Three, Shakespeare dispenses with merely following historical events, and as he lays the foundation for Richard III, he starts exploring why Richard is evil. Woronicz edited down both plays, removing many superfluous characters (Goodbye, Simpcox!) and retaining the most important plot points and personalities in the story. But the flaws in the dramatic structure are still there. Woronicz retained Act II, Scene 2 of Henry VI, Part Two, where York outlines his claim to the throne in the blankest verse possible. Part Three has the heavy-handed Act II, Scene 5, where a son realizes he has killed his father as another father realizes he has killed his son. The foreshadowing and asides in both plays are clunky, and Shakespeare’s later literary sophistication is missing. 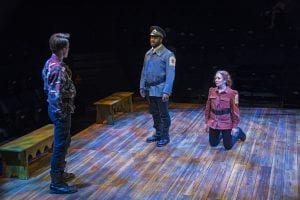 Like I have said in reviews of some other early Shakespeare plays (such as The Two Gentlemen of Verona and Titus Andronicus), some of the value in these flawed early plays is in seeing the seeds of later masterpieces. Shakespeare’s political vision, which values stability and a strong monarch and mistrusts the common people, is fully developed. Likewise, the motifs of the importance of dreams and the human cost of evil are present in both plays. Thus, Henry VI, Parts Two and Three give hints to Macbeth, Henry V, Hamlet, The Tempest, and Julius Caesar, and Shakespeare fans will love hunting for these reminders of later works.

There are reasons to see this production of Henry VI, Parts Two and Three, but they are limited. Completing a bucket list that includes seeing every Shakespeare play, wanting to understand Richard III better, or the steal of seeing two plays with one ticket are among these reasons. However, this production is not for the casual theatre goer. Even more experienced audience members will find Part Three to be a confusing and an unsatisfying experience. (Had I left at intermission after Part Two, I would have had a review that was almost as full of praise as my review for Part One.) There is an audience for this production, but it is a narrower audience than the other shows playing at the Festival.

The Utah Shakespeare Festival production of The Conclusion of Henry VI: Parts Two and Three plays various times through August 31, 2019 in the Anes Studio Theatre on the campus of Southern Utah University. Tickets are $52-56. For more information, visit their website.