CEDAR CITY — Theatre is ethereal, but does it have to be? The Book of Will, currently playing at the Utah Shakespeare Festival, grapples with this question through a story set a few years after Shakespeare‘s death.

William Shakespeare may be gone, but his plays are as popular as ever, with unprofessional companies mounting productions using pirated scripts. A mediocre production of Hamlet that uses the badly corrupted first quarto text scandalizes his surviving friends into pondering Shakespeare’s legacy. They decide to publish a compilation of Shakespeare’s plays into the book that posterity knows as the First Folio. Not only does the book save plays like The Tempest, King John, and Macbeth from being lost to history, but it also preserves Shakespeare’s legacy forever.

Director Melinda Pfundstein created the best possible production that can arise from this script. My favorite scenes were those that demonstrated the longtime friendship that had existed among actors Richard Burbage (played by Todd Denning), John Heminges (played by Chris Mixon), and Henry Condell (played by René Thornton Jr.). The opening scene had friendly, rapid banter that usually only develops after long familiarity. Pfundstein also crafted a simple but beautiful scene in the empty Globe Theatre where Henry Condell comforted John Heminges after the latter’s wife’s death. The sincerity and open (but not exaggerated) emotion showed that mourning and loss are the same today as they were four centuries ago. 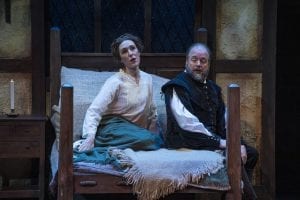 The relationships between the actors and their families were also rewarding. The loving dominance of Alice Heminges was apparent in the first scene, where Alice (running the family ale house) gave Ralph Crane (played by Mauricio Miranda) a beer over her father’s objection. This small incident foreshadowed the believable father/adult daughter relationship of equals that Pfundstein created for the pair, and that relationship paid off when John Heminges needed encouragement when his doubts about the First Folio resurfaced. Equally enjoyable was the husband/wife dynamic between Rebecca Heminges (played by Katie Cunningham) and John Heminges, which served as a reminder that many men who accomplish great things only do so because of a woman pushing them to achieve.

Additionally, the printing scenes were entrancing as the rhythmic movements (from movement director Megan Brunsvold Mercedes) and sound (designed by Lindsay Jones) combined to show the passage of time and progress with the book. The effect was mesmerizing, and its first time was one of the visual highlights of the play. Finally, I appreciated Pfundstein’s creativity in staging Rebecca Heminges’s death without a hint of cliché. 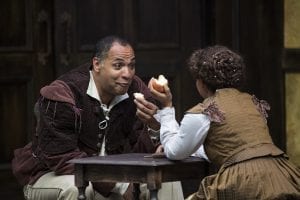 The greatest problem with The Book of Will is that the play does not need to exist. No one was clamoring for a play about the creation of the First Folio, and the story has little inherent drama. Yes, there were difficulties in the book’s publication, but that’s true for many books. It is never clear why the publication of the First Folio merits the historical fiction treatment any more than Leaves of Grass, Frankenstein, or many other works of classic literature. If anything, the story of the First Folio should be a documentary. The script works best when it shows the lasting friendship among the surviving actors from the King’s Men and grows tedious when discussing the details of the publication process. Unfortunately, only about 15% of the play focuses on the characters’ friendships.

Another problem with The Book of Will is that playwright Lauren Gunderson showed little more than a Wikipedia-level depth of knowledge about the creation of the First Folio and the people that made the book possible. She gets several details wrong, such as Shakespeare’s actor friends’ brief disagreement about whether Hamlet’s acting advice to the player king is in Act III or Act IV. In reality, the act and scene divisions in the First Folio text of Hamlet stop after marking the beginning of Act II, Scene 2 (Rosencrantz and Guildenstern’s first appearance), and none of the quartos of Hamlet have act and scene divisions. In other words, there is no designated Act III or Act IV for these people to argue about. It is also embarrassingly anachronistic to have characters quibble over spelling in an era when the only consistent thing about spelling was how inconsistent it was. 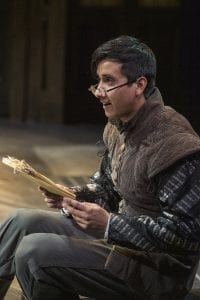 The reality is that, like many details surrounding Shakespeare’s career, there is much that historians do not know about the publication of the First Folio. Maybe Henry Condell really did have to convince John Heminges to compile Shakespeare’s plays. Maybe Ralph Crane really did surreptitiously copy scripts for his own personal collection. Maybe there was friction in the Jaggard family over the illegal publication of plays. Or maybe not. Given the lack of evidence, The Book of Will is just as fanciful—and just as vacuous—as the legend of Shakespeare poaching deer as a young man or conspiracy theories about who the “real author” of the plays was. It is never clear why Gunderson’s musings about Shakespeare’s friends merit any more attention than other myths about England’s greatest playwright.

With a subpar script, the actors have few chances to shine. Sarah Hollis has a nice scene as the supposed “dark lady” of Shakespeare’s sonnets, Emilia Bassano. Hollis, dressed in a fine 17th century gown designed by David Kay Mickelsen, exuded an urbane elegance that was a nice change from the middle class life of Condell and John Heminges. As Henry Condell, René Thornton Jr. was a beacon of energy and optimistic in the play, but the indignation he showed when he learned about the pirated False Folio was a highlight of the first act. Josh Jeffers (as Isaac Jaggard) and Betsy Mugavero (as Alice Heminges) had some fun little flirtatious moments, but the script—in one of its many disappointments—never developed a romantic subplot between the two.

The Book of Will is a salute to the life and plays of William Shakespeare. However, the best way to honor the man is to watch his plays. Seeing historical fiction in which characters awkwardly telegraph scholarly facts is a hollow substitute and a tragic waste of an excellent cast and director.

The Utah Shakespeare Festival production of The Book of Will plays various dates at 8 PM through September 5, 2019 in the Engelstad Shakespeare Theatre on the campus of Southern Utah University. Tickets are $20-77. For more information, visit their website.