LET THE RIGHT ONE IN leaves nothing out 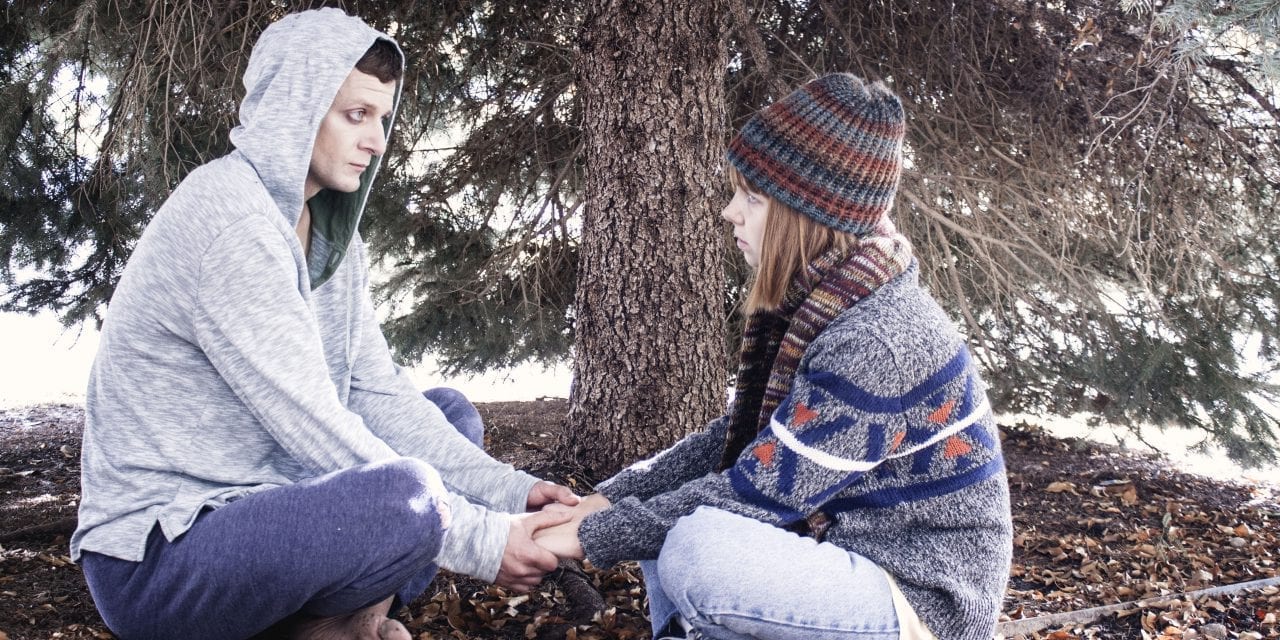 PROVO — Utah loves Halloween shows, hence the bountiful options available for the next few weeks. Perhaps something about the crisp fall air makes huddling into a theater to feel the chill sink right into the soul almost irresistible. If that’s true for you, I hope you will be lucky enough to find yourself in the room for An Other Theater Company’s production of Let the Right One In. Directors Chris Clark and Morag Shepherd deserve packed houses every night for their bold and visceral work. Jack Thorne’s adaptation of the Swedish horror film and novel (by John Ajvide Lindqvist) presents themes of identity, belonging, loss, connection, and pain with compelling visual style.

Let the Right One In‘s story of the developing relationship between a troubled boy named Oskar and a mysterious playfellow is both creepy and captivating. I watched mesmerized as the youthful romance blossomed against the backdrop of violence that surrounds their lives. The production expands on the original material in fascinating new directions with gender-intentional casting for the roles of Oskar and Eli (played by Scout Smith and Brian Kocherhans, respectively). Each actor brings powerful energy, desire to connect, and vulnerability to their childlike roles. Smith broods and swipes around the stage with all the pre-pubescent angst of any deeply lonely twelve-year-old. Kocherhans moves with agile lightness as his words come out stilted, almost painfully heavy with their hidden longings and hunger. I initially worried that Kocherhans’s vocal choices would become grating, but instead his consistency and full-bodied portrayal of the complicated Eli captivated me throughout the evening. 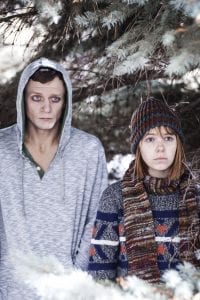 Brian Kocherhans as Eli and Scout Smith as Oskar.

The cast is filled out by other actors who each give strong performances. Ashley Wilkinson, as Oskar’s loving but damaged mother, seeks to connect with her son even while she watches him slip further and further away. Eli’s protector and father-figure (played by Kacey Spadafora) is deeply unsettling in his obsession with his degendered companion. Tyler Fox plays the local bully who torments Oskar with unflagging malice and cold rage.

An Other’s South Town Mall space is intimate and inviting, the stage is lined with church pews on all four sides, and the excellent direction means that there are no bad seats in the house. The walls are lined with missing person’s posters and the ceiling drips with blood-like fabric. The action of the play, across many locations, flows seamlessly through the open playing space. Madeline Ashton’s scenic design uses suspended ladders to create the needed doors, walls, windows, trees and playground equipment. These locations are grounded by clear, but never heavy-handed, ambient sound cues. The scenes flow with graceful accentuation from Miles Clark’s lovely under scoring. Sound cues were a little rough in their execution, but this minor flaw did little to deter the overall immersive impression. Lights, designed by Jaron Kent Hermansen, guide the action for the audience and add thrills in particularly intense moments.

Beyond the stellar performances and challenging thematic questions, it is Graham Brown’s stylized movement work that sets this production apart from other worthwhile spooky tales on stage this time of year. As relationships tighten and fray while the plot develops, the actors reflect these changes in their proximity, rhythm, and physical connections with one another. There are standout moments between Oskar and his mother as they connect and disconnect from each other. Acts of savage violence, childish games, and tender connections are enacted with captivating visual action. I couldn’t look away.

I saw the performance accompanied by a friend who has limited experience with theater performance. Though I was immediately transfixed, I was anxious that the stylized movement sequences would be too artsy for him to enjoy. He, familiar with the film, worried that I wouldn’t follow the rapid flow of action from one scene to the next. However, in our enthusiastic chat after the 75-minute show, we discovered that not only were our concerns unnecessary, but that these were the very elements that had drawn each of us further into the production. Despite the short run-time, Let the Right One In is a ripe exploration of the complexities of love and longing in all its many nameless, dangerous, powerful forms. It is rare for a show to be so simultaneously deeply satisfying in its horror and gorgeous in its visual telling.

Let the Right One In plays every Friday and Saturday at 7:30 PM through November 10, with additional performances on October 28 at 5 PM and October 31 at 10 PM at An Other Theater Company in the Provo Town Center Mall (second floor near the Payless). Tickets are $5-$17. For more information, visit www.anothertheatercompany.com. 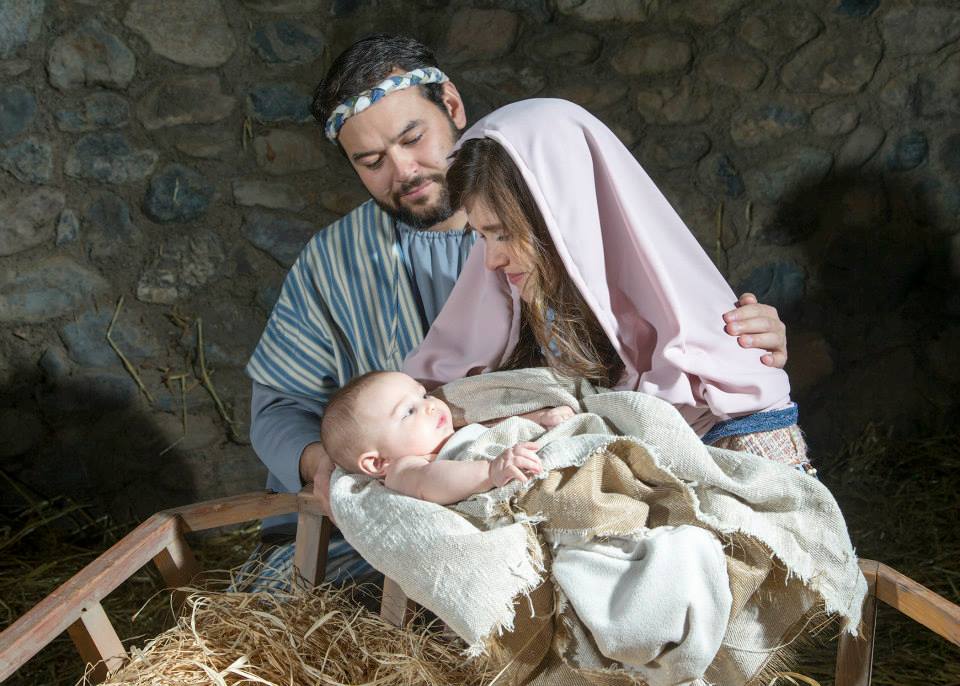 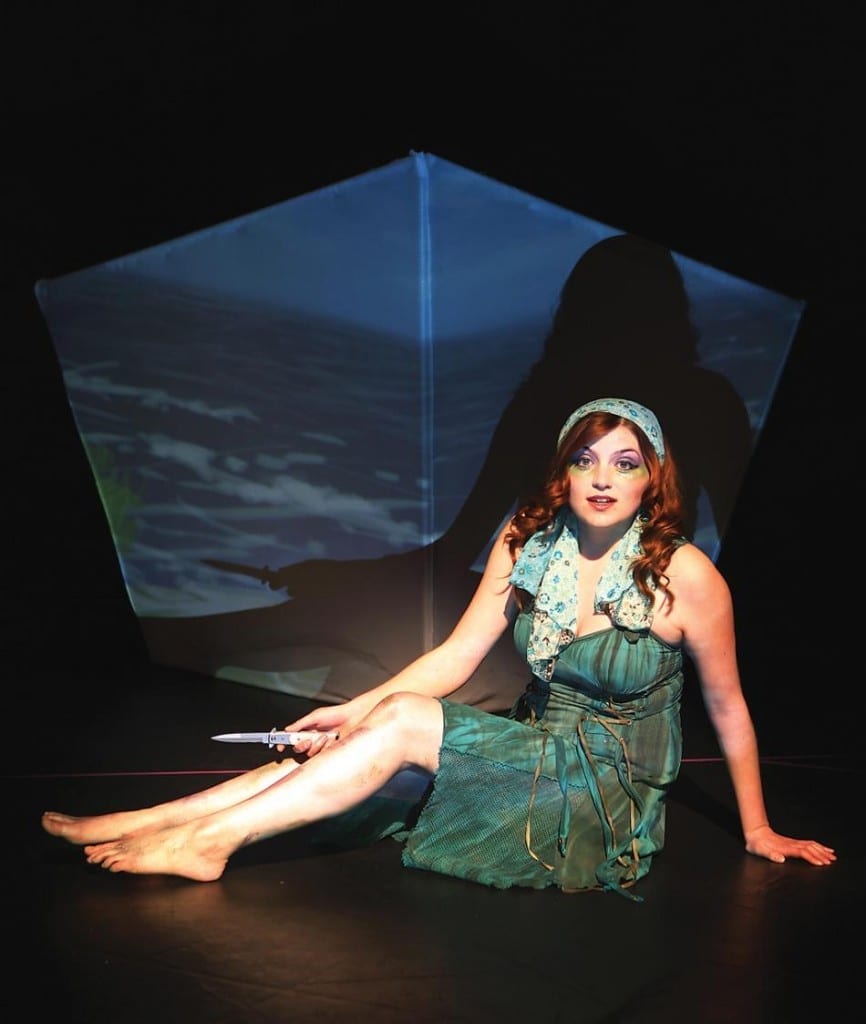 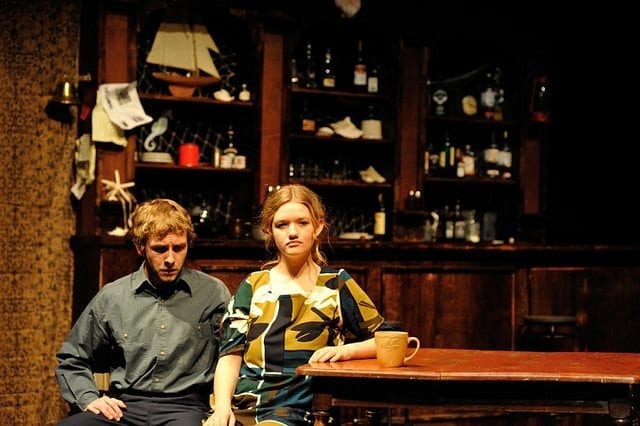 THE SEA HORSE at Westminster is an exciting experiment