OREM — Gruesome Playground Injuries is a contemporary drama with some dark comedy interspersed in the writing by Pulitzer Prize nominated playwright Rajiv Joseph. I first became a fan of Joseph’s writing after seeing his Bengal Tiger at the Baghdad Zoo on Broadway a few years ago, so I was eager to see UVU’s student production of one of his latest works.

Gruesome Playground Injuries is a two-person show following the lives of Doug and Kayleen, starting as young children at a playground at age 8 and then spanning 30 years of their lives through a series of vignettes. These snippets of their lives are not presented in a chronological order, but rather hopscotching back and forth through significant events in their childhood, teenage, and adult years. The common theme in each vignette is an injury of some sort that bring the two together, beginning with a simple scrape in the playground in which Kayleen picks rocks out of Doug’s hand, to both Kayleen’s intentional injuries (such as self-mutilation and pill popping) to Doug’s more unintentional injuries (due to his extreme hunger for high adventure and excitement though oblivion to danger). The play examines both the physical injuries of mortality and the emotional injuries that go much deeper. Though a heavy show indeed, the dark comedy and humanity in the writing keeps the scenes fresh and dimensional.

Shawn Saunders as Doug and Luci McNair as Kayleen gave honest and impressive performances. They encompassed the various ages and mannerisms of their characters in very convincing and believable manners. Both performers had great chemistry between  and added many nuances that enhanced their characters, which made them that much more real and believable. Saunders really shined in the scene where he comes to visit Kayleen with his cane and the owl from their grade school. He has excellent comedic timing and this scene was especially funny. Saunders kept many of the scenes from getting too heavy with his subtle choices that added a playful and optimistic energy to his character, even though the scenes often dealt with heavy subject matter.

McNair matched Saunders with her vulnerable and engaging portrayal as the depressed Kayleen. Her best scene of the show was the scene where McNair delivered essentially a five-minute monologue when she went to visit Doug in the hospital when he was in a coma. Her heart wrenching performance in this scene where she confesses her feelings for Doug and let down her emotional defenses was especially touching. McNair acted with her full body and internalized her feelings in away that really touched and moved the audience.

The small space of the UVU ExBox Theatre created an intimate feel to the piece, and both the acting and directing had a very film-esque feel that worked perfect for the style of the play. There were very few props and no set. The entire performance rested solely on the shoulders of the two actors who carried the production with prestige.

I also have to commend the excellent directing by Jessamyn Svensson. She used the space very well to create different times and places and her choice of music during the scene changes and transitions between scenes was expertly done. The convention of having the actors change clothing during the scene changes and having suit cases on both sides of the stage kept the audience engaged throughout the play. I also liked how Svensson directed the actors to dance and move to the music and interact with each other during these scene changes. The dancing and movement in their bodies always effectively set up for the following scene. Such a creative convention kept the show moving forward and never created a choppy or disconnected feeling, which this non-linear script could have easily had. The scene changes and transformations of the characters during these transitions were as engaging and interesting to watch as the scenes themselves. Seeing the characters wrap bandages on themselves or apply stage blood to a body part kept me guessing what the next injury would be or what age the actors would be in the next scene. Svensson also paid great attention to detail and helped the actors to interact with each other in a very believable and natural manner, such as having the actors poke each other or flirt with one another and do all the little things that couples do to get on each other’s nerves. Svensson is definitely a talented young director to watch in the future.

This was nearly a flawless performance. A couple of technical glitches with the lights flickering on and off at times was a bit distracting, but a relatively small problem compared to the strengths of the production. Though the play had a short run and has now closed, I would have highly recommended Gruesome Playground Injuries. It was very thought provoking and easy to relate to. With excellent writing, acting, directing and just enough comedy to keep the scenes from getting too heavy, it was easy for me to become engrossed in the lives of Doug and Kayleen. UVU continues to shine with its thought provoking and fresh works that it has brought to Utah this season.

Gruesome Playground Injuries played at the UVU Exbox Theater from May 1-4, 2013.

THE CLEAN HOUSE gets a pleasant staged reading at BYU 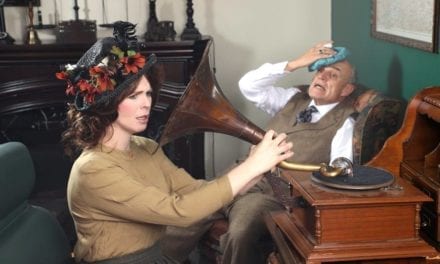