SALT LAKE CITY — It was the war to end all wars.

World War I began over 100 years ago, but its effects live on all around us.  It was the war that reshaped European dynasties and boundaries, destroyed empires, and created new ones. It was the war that showed European powers that America was not just some democratic upstart, but a force to be reckoned with. It is also one of the most dramatic backdrops upon which to stage an opera.  Huge in scope, but intimate in pain, Kevin Puts and Mark Campbell’s Silent Night, based upon the movie Joyeux Noel, dramatizes the most extraordinary night in the history of this most brutal war.

Many know the story of the “unofficial” Christmas Truce that occurred on and around Christmas Day in 1914, but no one quite knows how it happened.  From letters, journals and communiques, we know that in early December 1914, Pope Benedict XV issued an appeal to the leaders of Europe for a Christmas truce “that the guns may fall silent at least upon the night the angels sang.” Benedict’s hope was that a truce would allow the warring powers to negotiate a fair and lasting peace, but there was little interest from leaders on either side. As December 25 approached, the constant soaking rain gave way to frost, and the battlefields of Flanders were blanketed with a light dusting of snow. German emperor William II sent Christmas trees to the front in an effort to bolster morale. On December 23, German soldiers began placing the trees outside their trenches.  The story goes that on Christmas Eve of 1914, the strains of “Stille Nacht” (“Silent Night”) wafted from the German trenches across “No Man’s Land” into the British trenches.  The British forces responded with Christmas Carols of their own. 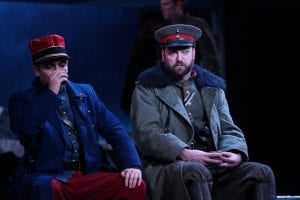 By Christmas Eve, some lower-ranking British officers had begun ordering their men not to fire unless fired upon.  As morning broke on Christmas Day, German soldiers emerged from their trenches, waving their arms to demonstrate that they had no ill intent. When it became clear that they were not carrying weapons, British soldiers soon joined them, meeting in No Man’s Land to socialize and exchange gifts.

As it tells this story, the opera is slow to start, taking a lot of Act I just to establish the three characters through which the audience will experience the story. The first is Nikolaus Sprink (well played by Andrew Stenson), the German opera singer whose performance is interrupted by Germany’s declaration of war. The second is Jonathan Dale (heartfeltly played by Jonathan Johnson), the young Scottish lad who is persuaded by his older brother to enlist for honor and glory. Finally, there is Lieutenant Audebert (ardently played by Efrain Solis), the French commander who must leave his pregnant wife mere weeks before his first child is due, to command a regiment on the Western Front in Flander.  It takes some attention to stick with the unfolding of the story, especially because it is sung in English, French and German. But the hard work pays off, when, finally, Christmas Eve arrives. 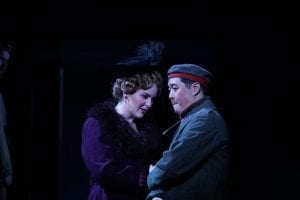 The night is heralded in this story by a Scottish bagpipe that scares both the German and the French.  At the sound, all rifles rise, wonder what that horrible din it.  It is a welcomed moment of humor that breaks the tension of the story. Behind the groaning noise, a soulful Scottish tune floats into the German trenches.  Then, after a moment, a white handkerchief arises from the Scottish, then one from the Germans, then another from the French join them.  It is a touching scene of courage and humanity when one man dares to enter the realm of the enemy to ask for a momentary silencing of the guns.  The moment of common humanity is when the show becomes captivating, and the opposing soldiers are shown not as enemies, but as fellow men as they interact with each other, sharing photos, champagne and chocolate. It is obvious that, in reality, there is no German, French or Scottish; there are only boys and men fighting a war they do not understand for emperors, kings, and oligarchs they don’t know. 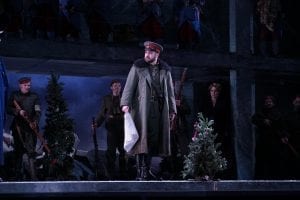 Despite the beauty of the story’s climax, I was disappointed that the song “Silent Night” was not woven into the score.  It is the title of the opera and the carol around which this whole incredible night is based.  And yet, the audience does not hear it, for no apparent reason. It is such a familiar melody that would have cut right to the audience’s hearts and helped them empathize more fully with the soldiers onstage. Still, Kevin Puts’s music is both contemporary and lyrical, very symphonic, almost like a film score. Conductor Robert Tweten led the orchestra perfectly, and, as always, it is a refreshing pleasure to hear live music at a Utah theater. 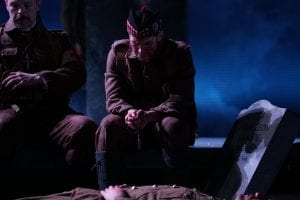 The opera is expertly staged by Tomer Zvulun, who uses the monolithic set (designed by Erhand Rom) extraordinarily well.  Rom’s set is designed for the action to take place not only on the battleground, but inside a World War I monument, almost a mausoleum, that is as cold and austere as that “No Man’s Land” must have been. It was an effective design choice. However, the set, while visually stunning, was slightly problematic in that the characters were so far upstage that it inhibited me from engaging fully with the characters. In addition, because opera singers never use microphones, when the singers are that far away, it is hard to hear them. But when the players descend to “battleground level” the action jump-starts, grabbed my heart to be with them again. 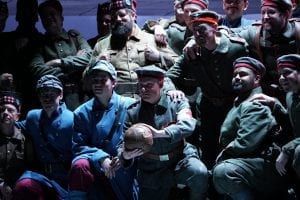 The supporting cast does much to capture my affection, as they provided a glimpse into each character’s everyday humanity. Daniel Belcher as Ponchel, the French commander’s aide, has a tender moment reminiscing about having daily coffee with the character’s mother while giving his commanding officer a haircut. In the role of Father Palmer, Troy Cook poignantly played the Scottish priest who is the first to raise the white flag of friendship. Finally, Abigail Tethwisch beautifully plays Anna Sorensen, the young opera singer in love with Sprink and who courageously ventures to the front so as not to lose the love of her life. Tethwisch gorgeously sang a lovely aria where she gorgeously sings about the women of the war who will, inevitably, receive word that their husband, son, brother or love has been killed.

The power of Silent Night comes from not only the music, libretto and circumstances, but also from the devastation of war and the fate of the men shown on stage. For those men in the early months on the Western Front, daily life was miserable, but it was a misery that was shared by enemies who were, in some places, separated by only 50 yards of desolate mud. On Christmas Eve 1914 this silent night managed to bring mortal enemies together as friends for a few brief hours. It is a tender story worthy of remembering with a beautiful operatic production on the Utah stage.

The Utah Opera production of Silent Night plays at 7 PM on Mondays and Wednesdays, 7:30 PM on Fridays, and 2 PM on Saturdays through January 26 at the Janet Quinney Lawson Capitol Theatre (50 West 200 South, Salt Lake City). For more information, visit utahopera.org.