PROVO — Director Stephanie Breinholt’s voice caught with emotion as she spoke to the audience before opening the final show on BYU’s Pardoe Theatre stage: Kate Hamill’s award winning adaptation of Jane Austen’s Pride and Prejudice. As Breinholt spoke of the history she had with the space as a student and faculty member and as someone familiar with the space, I couldn’t help be touched by reflecting on the magnitude of the moment. As Austen’s Mr. Darcy said, “Think only of the past as its remembrance gives you pleasure.” This production of Pride and Prejudice is a worthy addition to the long remembrance of the Pardoe Theatre and BYU’s Harris Fine Arts Center.

Breinholt’s direction was strong and communicated a clear vision for the show. It was clear that pacing, comedy, and strong characterization were primary targets of this production. Before any dialogue is spoken, Breinholt has expertly directed the cast to reveal their characters by navigating in character the elegant scenic design of Elisabeth Goulding. The set features a dual sided staircase, book shaped stairs and creative use of the large turntable on the Pardoe stage which enables the actors to play with levels and creatively move to many locations with a static unit set.

Hamill’s script uses surgical precision to get to the heart of Austen’s beloved story, removing much that often bogs down a Pride and Prejudice script. The first act is witty, whimsical, and fast paced, while the second slows down to add more gravitas to the internal conflicts of the characters. While beloved scenes and characters, such as Kitty, have been removed from the story in this adaptation, they are hardly missed, as the story is tightly woven and focuses on giving each character meaningful growth. Mr. and Mrs. Bennet have a delightful banter, but are firmer on standing their ground against Lydia’s running away in this adaptation than in others, which strengthens their character arcs. 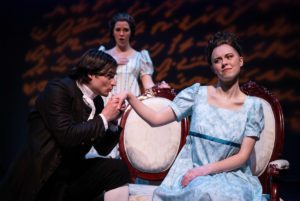 Choreography is also neatly woven into the storytelling by Melanie Cartwright. Rather than having long and indulgent dance sequences, the formal ball scenes are carried out while the dialogue happens to keep the pace of the show bouncy and witty, especially in the first act.

The music, on the other hand, had shortcomings. While it may be true that an Austen play in possession of talented players must be in want of live music, the performance of the live music was not a remarkable success. Composer Joseph Phillips has a serviceable score, but the execution of that score sounded unbalanced. In the scene transitions, the music often was not mixing well. Given that this was opening night, I hope that further practice will help the music ensemble to harmonize, but the music was not a major positive in what was an otherwise strong performance. 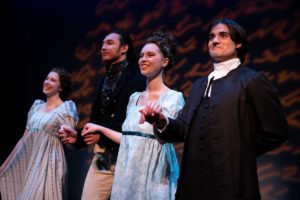 The actors clearly have good chemistry with one another, as their playfulness and collaboration come through well. There was sincere joy on the face of Freja Jorgensen’s Lizzy Bennet when she and Mr. Darcy finally confess their feelings for one another at the end of the play. Malin Glade’s Mary was a show stealing charmer and evoked pity from the audience as the other characters consistently berated her. Alison Taylor brought a truly giddy and committed attention to detail as Mrs. Bennet as opposed to the melodramatic portrayal so often seen. Her squeals of joy for the men in her daughter’s life felt authentic and irrepressible.

The on-stage camaraderie of the performers, or perhaps opening night nerves, often led to actors — particularly Glade and Jorgenson — breaking character. However, the acting was overall dynamic, and its pace kept my attention from start to finish. Each actor had a logical sense of purpose and identity, including Ellie Mellen (whose mercurial joy as Lydia was an excellent match for Taylor’s portrayal of her mother) and Connor Hyde (with hiss emphatic announcement of guests to Netherfield), played in a way that affirmed each character belonged in the story. 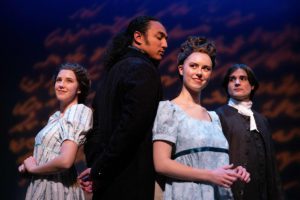 Marianne Ohran’s lighting told a beautiful story that made each of the estates and regency era locales in the story distinctive. Longbourn was warm and welcoming as the host to much of the Bennet family’s playful banter. Netherfield was distinctly darker and provided a nice background for Langi Tuifua’s potent portrayal of Mr. Darcy to be slandered by the Bennet family and express his disgust with courting generally. The costuming by Jessica Cowden was appropriate for the era by having gentlemen in trim tailcoats and the women in period appropriate dresses helped to keep the story in the period it was written in. Similarly, the uncomplicated and well executed makeup designs by Shannon Hutchins kept the story grounded. The highlight of Hutchin’s work, however, was the excellent wigs, primarily the one worn by Darci Ramirez as Lady Catherine De Bourgh. The wigs were well styled and added a flair to the characters that made their extravagance come to life on stage.

Perhaps the biggest concern I had as I watched the show was not actually the show. Instead, it was the tonally strange and off-putting Intermezzi acts that took me out of the moment of the show. Even as a theatre maker by trade, I had a hard time suspending my disbelief to understand why an electric guitar and a rap were contributing positively to the production when the tone of this brief interlude was whimsical like the show, but was otherwise completely tonally amiss from the other production elements. It felt gratuitous and I do not recommend audience members hurry back from their intermission break to watch it.

Ultimately, Pride and Prejudice at BYU was a great deal of fun. It was easy to see that the actors enjoyed being on stages through their barely suppressed grins and their tightly knit storytelling. I found myself laughing heartily more often than I ever expected from a performance of Pride and Prejudice without sacrificing seriousness as Lizzy and Mr. Darcy’s relationship grew more complex. The progression of the play led to less laughter, but richer drama as the family’s intense response to Lydia and Wickham’s arrival at the Bennet’s Longborn was not an “all’s well that ends well” acceptance of her flightiness, but rather a family seeming to take responsibility for what led to her foolish choice. While Austen purists may take umbrage with the severity of the cuts to the story, I found the play to be light and refreshing. BYU’s Pride and Prejudice was quirky and playful without straying too far from conventional storytelling of the classic text. As someone who spent a great deal of time as a student in and around the Pardoe Theatre, I say with much pride, and only a little prejudice that this show was a worthy final production for a historic stage.

Pride and Prejudice plays Tuesdays through Saturdays at 7:30 PM and Saturdays at 2 PM in the Pardoe Theatre on the campus of Brigham Young University. Tickets are $21-24. For more information, visit arts.byu.edu.