An enchanting BEAUTY AND THE BEAST in West Valley

WEST VALLEY CITY — Beauty and the Beast may be a “tale as old as time,” but at West Valley Arts, the show is lively and entertaining, thanks to the dynamic direction of Pam Peterson and a talented cast. This production strikes the right balance of familiarity and novelty to create a satisfying version of the classic Disney musical. 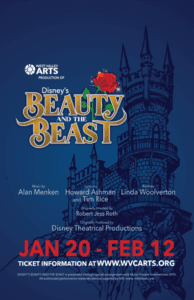 From the beginning, Peterson injects innovative ideas into the production. The opening prologue is delivered as a bedtime story to a young child by her grandmother (played by MaryJane Wadley), instead of the traditional male voiceover. On stage, the enchantress (played by Shaylia Johnson) casts her spell onto the selfish prince, while six actors dance emotively around the new beast to effect the transformation. It is a beautiful and creative start, and the show never backs down from such innovative moments.

Peterson directs group scenes to be bustling with movement and activity. None of it is frenetic or pointless, though. When the townspeople swerve around Belle during her opening number, or the enchanted objects cower in fear as the Beast shouts in his rage, or in the movement of any other group scene, the blocking puts the focus on the most important characters for the scene and ties the actors’ performance together into a coherent whole.

Ben Roeling choreographed this production, and his “Gaston” dance was so invigorating and joyful that I wanted to put down my critic’s notebook and go audition for a musical. “Human Again” was a lovely French waltz in which the actors twirled around the stage in dizzying circles. Roeling’s dance for “Be Our Guest,” though, lacked pizazz during much of the song. However, it finished strong, and I did like the enchanted objects dancing on the dining table as if it were a stage. 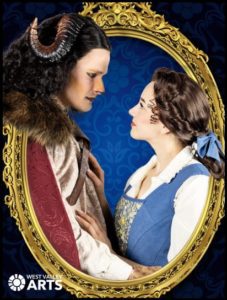 Chase Elwood as the Beast and Breearna Mandla Walker as Belle.

As Belle, Breearna Mandla Walker has the acting chops to handle a lead role. Walker makes curious and decisive early on in the play, which makes Belle’s later actions grow naturally from her personality. Walker also has an excellent command of the show’s music, and I appreciated her vocal power and control during “Home” and “A Change in Me.”

Walker is also a generous scene partner. She effortlessly makes an emotional connection with her fellow castmates, elevating their performances and creating meaningful relationships between Belle and other characters. Belle’s affection for her father (played by Ryan Anderson), her disgust when Gaston (played by Jason Baldwin) kisses her, or her appreciation for the kindness of Mrs. Potts (played by MaryJane Wadley), or the deepening bond with the Beast all appear genuine. Walker isn’t playing a cartoon character on stage; she’s playing a woman with real thoughts and feelings.

Chase Elwood, as the Beast, has the hardest role in the play. Linda Woolverton‘s script requires him to be cruel and yet vulnerable. Elwood gives a nice performance and can balance these extremes in his character. The way Elwood would crouch on a chair (instead of sitting on it like a normal human) was a charming touch, and I enjoyed watching his character gradually grow closer to Belle in the second act. 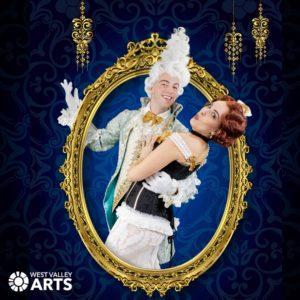 Brynoch Rammell as Lumiere and Shannon Ricks as Babette.

The supporting cast also contributed to the strength of this production. Wadley is a lovely presence as Mrs. Potts, and the comfort she gave to Belle during the reprise of “Home” or to Cogsworth when he discovered a winding key in his back made her an emotional anchor for the characters in the castle. Additionally, Wadley’s performance of “Beauty and the Beast” is sublime in its beauty and simplicity. As Lumiere, Brynoch Rammel is dashing and charismatic, making him a natural leader among the enchanted objects.

Really, every cast member deserves kudos, especially for their singing. Musical director Gayle Lockwood helped these performers meet the full potential of the score (with music by Alan Menken and lyrics by Howard Ashman and Tim Rice). Every song was a musical success. Even the musical details were impeccable. I especially enjoyed the harmonies in “Gaston,” the soprano descant in “Human Again” (sung by Daysha Lassiter as Madame Bouche), and the power of the finale.

Visually, the most memorable aspect of this production is the costumes, designed by Kelsey Nichols. The costumes were inspired by the 1991 film without being bland copies. Nichols used patterns, textures, and layers to add extravagance and detail to every costume. Every costume is gorgeous to look at, and the designs place the play’s action distinctly in the 18th century, instead of a vague fairy tale setting.

While beautiful, the costumes for the enchanted objects were confusing because none of them looked like the objects they were supposed to be. Lumiere looked more suitable for a realistic production of Amadeus or The Scarlet Pimpernel; Cogsworth simply looked like a dandy and not a clock. Apart from a hoop skirt, there was nothing in Mrs. Potts’s costume that made me think of a teapot. If I had not known what objects they were supposed to be, I would have been bewildered by the characters’ distress about turning into objects. But watching live theatre often requires the audience to use its imagination, and even my 5-year-old daughter had no trouble filling in the blank spots of the costuming with her mind.

The West Valley Arts production of Beauty and the Beast was able to entertain three generations of my family on opening night. The new ideas that the director infused into the show make it a vibrant production that can appeal to all ages. I hope that word of mouth spreads and that more people appreciate this moving production.

The West Valley Arts production of Beauty and the Beast plays Wednesdays through Saturdays at 7:30 PM and Saturdays at 3 PM at Harlan Hall (3333 South Decker Lake, West Valley City). Tickets are $15-20. For more information, visit www.wvcarts.org/.