OREM — La Bohème at Utah Valley University is an opera for the masses. While still faithful to Giacomo Puccini‘s vision, this production strips away any pretense, distance, and stodginess of opera, and leaves a core that is beautiful, enjoyable, and moving. UVU’s La Bohème is an opera for people who don’t yet know that they will enjoy opera.

Show closes with these performers in the leading roles on January 24, 2022.

It is not necessary to understand Italian to follow the story of Luigi Illica and Giuseppe Giacosa’s libretto. The story opens in the cold, apartment that poor, starving playwright Rodolfo shares with his friend, the artist Marcello. After some other artist friends visit and then leave Rodolfo alone, a neighbor—the sickly embroiderer Mimi—visits to ask Rodolfo to light her candle that blew out. The two fall in love and visit a café popular with their circle. A month later, their relationship is on hard times because Mimi is dying, and the penniless Rodolfo avoids her in the hopes that she can find a suitor who can help her more. Mimi overhears Rodolfo’s explanation for his emotional distance, and they try to part ways, but their love for one another is too great. In the end, Mimi’s illness proves fatal, but not before she confesses her infinite love for Rodolfo. 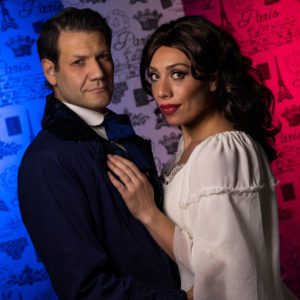 A tragedy? Yes. But audiences should not let that deter them. The libretto is sprinkled with wit and humor, and I chuckled often throughout the night. Director Matt August found excuses in the text to touch upon a vast array of human emotions and experiences. August is also a master of the stage picture, and every five or ten minutes I wished that someone would stop the show to take a photo. August directed this production like a play, and he has a talent for creating engaging stage business that brought depth to each scene. One shining example was Act II, which was a vivacious and joyful street scene, bustling with eager children, excited revelers, and busy waitresses.

As Rodolfo, Isaac Hurtado is an impassioned singer, with a powerful tenor voice that easily fills the theater. Hurtado is a dashing Rodolfo, whose energy and drive move the opera along at an almost electric pace. Hurtado was sometimes overpowered by Costa-Jackson in their duets, but he throws himself so fully into the music that none of that matters. He still does justice to the music and shows the audience why Puccini’s score is a masterpiece.

Hurtado also creates a great camaraderie with the other artist characters: Marcello (played by Christopher Holmes), Schaunard (played by Christopher Clayton), and Colline (played by Matthew Curran). The four performers showed a realistic bond among their characters — no easy task while singing opera. Clayton, in particular, had a roguish stage presence that I found enjoyable to watch.

Melissa Heath played the most complex character in the opera, Musetta. Heath gives Musetta sass in her first scene, but allows the character to grow into a tender, feminine presence during Mimi’s final moments. Heath is a dynamic presence in this opera, and I loved how she could outwit the landlord Benoit, or hold her own in an argument with Marcello in Act III.

The production’s shortcomings are few and minor. August’s opening tableau does little more than establish Rodolfo as a writer (which the libretto will do soon anyway) and convey the message that this ain’t your great-grandfather’s Puccini . . . but by the end of Act I, any high concept ideas have been dropped, and the opera becomes a lovely visit to 19th century Paris. Additionally, in the busy café scene in Act II, some chorus members were disengaged from the action and seemed to be just waiting for their turn to move or sing.

Peter Dean Beck‘s set design (originally designed for the Arizona Opera) grounds the action in a realistic location — and is gorgeous, to boot. The raked floor gave Beck license to introduce interesting angles in other locations. (Although, the stage left balcony was sometimes rickety, and I worried for the performers’ safety.) Cee-Cee Swalling costume designs were the most realistic aspect of the production and were faithful to the 1840s period of the action. However, Rodolfo’s first costume looked oddly modern and anachronistic, though after Act I this issue was corrected.

The true visual triumph, though was the lighting design by Peter D. Leonard, which always emphasized the story and added a layer of beauty to the action. The use of pink lighting to link the first and second acts, or shining the only warm light color onto Mimi as she reads Rodolfo’s writing are examples of Leonard’s genius. I don’t remember the last time that I fell in love so much with a lighting design.

There is so much to appreciate about La Bohème at UVU. But for all its artistic excellence, it is — most importantly — accessible. August, the performers, and designers have created an opera production that is a great introduction to the art form. Bravo to UVU.

La Bohème plays January 22 and 24 at 7:30 PM with Marina Costa-Jackson and Isaac Hurtado in the leading roles and January 26-29 at 7:30 PM with UVU opera students in the lead roles. Performances are in the Smith Proscenium Theater in the Noorda Center for the Arts on the campus of Utah Valley University. Tickets are $5-50. For more information, visit uvu.edu/events/.