WEST VALLEY CITY — You wouldn’t think you’d hear “I hate theater!” at the beginning of a play—at least not from the stage. Yet before the end of the Hale Centre Theatre’s frothy, fizzy, fabulous production of The Drowsy Chaperone, you’ll find yourself wondering when you last laughed so heartily and enjoyed such a blissful evening of entertainment. And you’ll also beamingly proclaim, I love theater!

That’s the entire point of The Drowsy Chaperone, in its regional premiere. It may be fleeting and forgettable, but it’s as scrumptiously delicious as a juicy, chocolate-dipped strawberry after a long fast. Not just a lovingly crafted homage to stage razzle-dazzle, it’s also a lacey, rose-red valentine to all musical theater fans who lip-sync showtunes while dancing alone in front of a mirror, with their Tony acceptance speeches already partially rehearsed. (“I can’t forget my first grade teacher and…”) Count me in.

As ingenious as this retro-yet-wholly-original musical-within-a-comedy is, it would fall flat without a seasoned group of gifted singer-actors. Each is in on the parody but also knows not to take the farcical humor too broadly. David Tinney, who artfully directed and choreographed, never disappoints. Members of his remarkably adroit troupe deliver outlandish, side-splitting comic performances.

Beginning with our narrator and commentator, the unnamed Man in Chair, Greg Barnett has all the ticks and mannerisms to superbly portray the lonely, melancholic middle-aged divorcee who finds escape in his record collection, particularly his battered copy of the titular show. When he first opens his vinyl album of a fictional 1927 Broadway musical called The Drowsy Chaperone (and it’d be quibbling to point out that were no cast recordings until the 1930s), we are captivated and transported. He unfolds “another world that gives you a little tune, something to escape from the dreary horrors of the real world.” Barnett has wonderful comic timing and holds the whole evening together with his warmth and charm. Even the throwaway lines spark loud laughter.

The enchanting Prohibition-era musical farce then bursts forth inside his dreary modern-day studio apartment. The original production was staged within a proscenium, but many of the character reveals are even more surprising in the Hale’s in-the-round theater, and this production makes genius use of the stage’s many varied theatrical devices. We hear wickedly funny backstage bon-bons, and with us Man in Chair watches (and sometimes joins in) the on-stage escapades. He introduces the play’s cavalcade of characters, each plucked straight out of the vaudeville stock trunk, and also gives humorous insight into the fictional actors who portray the roles.

There’s the cigar-chomping Broadway producer Feldzieg (a terrific David W. Strensrud) and his bleach-blonde chorine girlfriend Kitty (the delectable Ashley Kathryn Mayfield), who dreams of the big time but with no discernible talent (except mind-reading; her own, not an audience member’s). And the great Feldzieg Follies star who is about to forsake the stage to marry an oil tycoon she met on a cruise.

Kelly Coombs (alternating with Debra Weed, TThSa) is a knockout as the lovely diva Janet Van de Graaf. While her turn in “Show Off” is not as showy with as many gymnastic dazzlements as in other incarnations, she has a lilting nightingale soprano that can belt with the best of them. Ames Bell (Taylor Eliason, TThSa) is excellent as the ardent leading man cum bridegroom, the dashingly handsome Robert Martin. You’ll roar with laughter as he skillfully maneuvers the tight stage while blindfolded on skates (because he shouldn’t see his bride on the wedding day and continued tap dancing would be too risky; yes, it’s that kind of show). Effortlessly channeling Gene Kelly, Bell sings beautifully and taps like there’s no tomorrow in “Cold Feets,” one of the show’s highlights. The winning chemistry between Coombs and Bell is evident in “Accident Waiting to Happen,” their molasses-sticky duet.

As the bride’s chaperone, who is constantly drowsy (a period euphemism for tipsy) because of her nonstop swilling of martinis, Marcie Jacobsen nails her big solo “As We Stumble Along,” a comic anthem that outlines the show’s philosophy of how we maneuver through “life’s crazy labyrinth.” She’s outrageously funny in her faux romantic scenes. It’s tricky to play a bad actor and be funny doing it, and David K. Martin (Darick J. Pead, TThSa), in a Pepé Le Pew-style coif, comes close as the Latin lothario Aldolpho. He’s still able to win the audience over and gets solid laughs out of the often-mocked stereotype. Martin wrings each laugh out of wondrously comic solo, perhaps the best written song in the show. Michael Holt and Kyle Olsen (Jeremiah Ginn, TThSa) deliver some hilarious synchronized shenanigans as a pair of mobsters disguised as punning pastry chefs. Bruce Bredeson (David T. Glaittli, TThSa) makes the most of a dry-as-a-martini, long-suffering butler Underling.

Suzanne Carling led the Hale’s design team to craft the costumes that come in a blinding array of bright colors but should be more eye-popping and broadly comical for this fantasy theater world. Only Janet’s final-scene wedding dress is appropriately dripping in rhinestones, and many of men’s suits are not quite period-authentically styled. The ever-surprising, crafty scenic design is by Kacey Udy, who also serves as technical director. The confident, colorful lighting design is by Spencer Brown, and the crisp sound design is by Dan Morgan.

After opening in Broadway in 2006, Chaperone received 12 Tony nominations, winning five awards, including Best Book and Score (losing the Best Musical trophy to Jersey Boys). The story behind its development is nearly as charming as the show itself. The Drowsy Chaperone was the first musical written and composed by Canadians to make it to Broadway in 25 years and has been Canada’s only successful Broadway musical. The show was conceived as part of an unconventional bachelor party, held at a Toronto nightclub in 1999. Guests were charged an admission fee to help pay for the wedding. Lisa Lambert was one of three “best men” to the groom, actor and producer Bob Martin (a veteran of Second City Toronto and co-developer of a cult-fave Canadian TV series, Slings and Arrows), whom Lambert, librettist Don McKellar and co-composer Greg Morrison had known since high school.

I enthusiastically recommend you see this show.  When you do, just try not to think of the poodles.

The Drowsy Chaperone is produced by Hale Centre Theatre (3333 Decker Lake Drive, West Valley) at 7:30 PM on Mondays through Saturdays and at 12:30 and 4 PM on Saturdays through November 27 (except November 24 and 25).  Tickets are $15-26.  For more information, visit www.halecentretheatre.org. 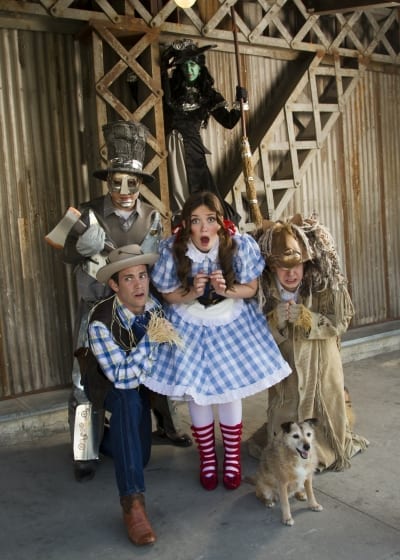 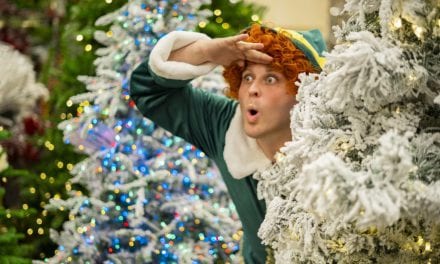 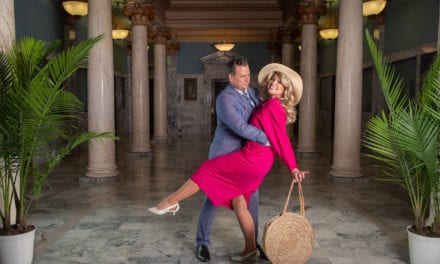