PERRY — I am so sick of hearing about our “unprecedented times.” Things have certainly changed over the last year, I’m not denying any of that, but I find myself feeling very over the news of it all. I am left longing for more “precedented times” that are familiar and comforting. Nunsense, with book, music, and lyrics by Dan Goggin, is a show that has been around my whole life. It debuted in 1985, just a few months after my own entrance to the world, and has kept audiences returning time and time again to enjoy the laughter and excellent musical numbers. Heritage Theatre’s production does a remarkable job with this Off-Broadway darling delivering superior vocals and good comic timing making for a delightful evening of distraction. 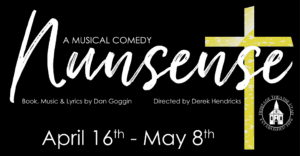 For anyone who hasn’t had a chance to see Nunsense before, Director W. Derek Hendricks’ version is traditional with a few fun updates and will be a great introduction for any theatre-goer to the Little Sisters of Hoboken Convent. The premise of the play is both simple and absurd. The sisters are putting on the show for the audience in hopes of raising some funds. There was an unfortunate incident involving some bad vichyssoise soup that killed off most of the sisters of their convent. Some sisters escaped the grim fate of death by soup while playing bingo across town, and now they need to raise enough money to finish burying the dead.

When I review a community theatre production, I generally go into the show with lowered expectations than a production with paid actors. With that said, this production of Nunsense went above and beyond what I expect from professional singers. Led by music director Holly Lowell, the five female leads of this production were never off pitch, and their harmonies were intricate and tight throughout the show. The sisters were also joined by a small band that included Claudia Bigler and Misa Findlay on piano, Lowell on keyboard, Jess Hall on bass, and Cori Lloyd. The band was never overpowering and was perfectly balanced with the women singing.

Leading the nuns is the Reverend Mother Sister Mary Regina played by Allisha Larsen. Larsen had good comic timing on her bit when her character discovered a student’s stash of “rush” and accidentally got high. Her alto voice was in tune throughout the show and blended beautifully in harmony with the other sisters on stage. I did feel that her voice was not quite strong enough for the belting number, “Turn up the Spotlight,” which left the solo lacking in pizzazz, but overall Larsen gave a strong performance. 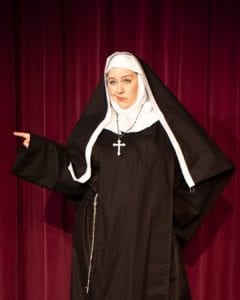 Actress Jackie Manning plays Sister Hubert, the second in command at the convent. Manning has a strong voice that was a little overpowering in her duet with Sister Mary Regina when Larsen couldn’t quite keep up, but Manning’s powerful belt brought down the house with the show’s closing number, “Holier Than Thou.” The company backed her up well, and Manning’s strong belt had me clapping and reveling in that holy roller number.

Sister Mary Amnesia, played by Ashlee Giblette, was a standout performer of this whacky troupe. With a little help from her puppet friend, Sister Mary Annette, Giblette gave a hysterical rendition of, “So You Want to be a Nun,” to search for potential converts. The jokes were spot on, but it was Giblette’s powerful soprano voice that had me feeling the spirit.

Sister Mary Leo (Katie Mayer) is a novice who wants to be the first famous nun ballerina. I guess that it is possible since there is a nun on the Academy awards committee, real life starlet-turned-nun Dolores Hart. However, Mayer’s Mary Leo won’t be a prima ballerina anytime soon; her dancing was only so-so. Mayer’s vocals, on the other hand, were exceptional and full of passion.

The street-wise Sister Robert Anne, played by Breanne Hendricks, had a contagious smile and laugh. Breanne Hendricks didn’t bother to try and do the Brooklyn accent for more than one line, but she made her tough sister funny, relatable, and sang with heart on, “Growing Up Catholic.” Robert Anne and Mary Leo also gave a great pantomime dance they called the “dying nun,” which still used the very old reference to the “flying nun” but updated it enough for everyone under 40 who might not know the reference. This place in the script was one of the places Director W. Derek Hendricks updated in a nice way.

The technical aspects of the play were all executed well. The set was designed by Director W. Derek Hendricks to look like the set of Grease and uses the small space well with just a few wagon pieces. The smaller stage at the Heritage is perfect for this show and makes for great interaction between the ruler-wielding nuns and the audience, who should be ready for a pop quiz if they aren’t paying attention.

The choreography by Ginny Spencer, Dawn Allen, and Justin “Spot” Beecher was generally simple, which was smart because it means it was executed well. Rather than push the actresses to do more than they could handle, the focus was on formations and staying together. This choice was pulled off well and added greatly to the performance. The tap number was particularly successful for that reason and was enjoyable.

While some of the references made in the script are dated, Nunsense has stood the test of time, because it is just downright funny. I was joined by my six-year-old daughter and heard the folks in the row behind me talking before the show about their great-grandchildren, but despite the vast difference in age, all of them were in stitches watching a bunch of singing nuns. The show has a fast pace, and the ridiculous premise has held audiences at attention for decades. Heritage’s version in particular has an astounding amount of vocal talent rarely seen without paying a premium for a professional production. These five women blew me away with their harmony, range, and power and were expertly balanced with the quartet backing them up. Any music-loving theatre patron in need of a good laugh will enjoy this show. If you haven’t seen it before, set a precedent with this production. If you have seen Nunsense before, you will enjoy coming back to the laughs and songs that still land well after all this time.

Nunsense plays at the Heritage Theatre (2505 South Hwy 89, Perry) through May 8, 2021, on Mondays, Fridays, and Saturdays at 7:30 PM with matiness on April 24 and May 1 at 2 PM. Tickets are $15 for adults and $12 for children. Masks are required to be worn by the audience. For more information, please visit their website.