OREM — The Christmas theatrical season has arrived, and (of course) nobody is more thrilled than Buddy the Elf. The overly enthusiastic character is on stage now in a nice production of Elf: The Musical at the SCERA.

The musical adaptation follows the story of the 2003 film faithfully. Buddy, a human who was raised by elves at the North Pole, leaves his home to find his biological father, Walter Hobbes, who is a business man in New York City. Buddy’s father is distinctly lacking in Christmas cheer, and his overly excited Christmas-crazy bastard son is an unwanted addition to Walter’s life. As always happens in heartwarming Christmas stories, Walter learns to embrace his family and the spirit of Christmas, and everyone gets a happy ending.

Michael Carrasco directs this production with a steady goal of propelling the story forward. Scenes flow into songs effortlessly, and the show has a momentum that even a few dropped lines and late cues in the office scenes could not disrupt. Carrasco has a knack for directing comedy, and the laugh rate for the jokes in Thomas Meehan and Bob Martin‘s script is respectfully high. 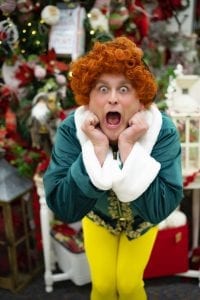 Eric Smith as Buddy the Elf. Photo by Rachel Gibson.

However, it is choreographer Chantelle Wells that makes Elf: The Musical special. Wells added some traditional musical theatre pizzazz to “Sparklejollytwinklejingley” and infuses “World’s Greatest Dad” with the hustle and bustle of New York City. Wells is not flashy in her choreography, but her work adds charm and sparkle to each song.

As Buddy, Eric Smith overflows with energy and enthusiasm. Smith’s excitement is infectious, and he made even this jaded critic smile frequently. Buddy’s shock when he learns that his father is on the naughty list and his anger at meeting a phony Santa Claus were some of the funniest moments in the play. Smith also embraced Buddy’s innocence, and that made the character endearing instead of cloying.

Patrick Brannelly is burdened with playing the show’s obligatory Scrooge character. It gives Brannelly little variety until the second act when gives Walter frets about losing his job. Brannelly gives the character his most realistic moments when worrying about unemployment, and I enjoyed watching these scenes because they were the only depth shown in the character. “The Story of Buddy” also showcased Brannelly as a song and dance man, which was a pleasant surprise after seeing him play straight and serious until that point. 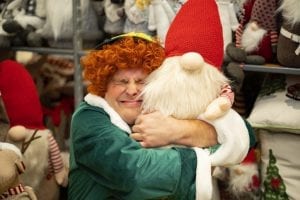 Eric Smith as Buddy the Elf. Photo by Rachel Gibson.

Elisha Garrett was the most realistic leading character in her role of Buddy’s romantic interest, Jovie. Garrett is underutilized, though hints of the breadth of her talent were apparent from time to time. “Never Fall in Love With an Elf” showcased her vocal belt and power, while the scene outside the Tavern on the Green allowed Garrett to show Jovie as a vulnerable person. I wish she had more romantic chemistry with Smith, but the two do not have much time on stage together, so I can forgive that aspect of the production.

Finally, Elf: The Musical might have the hardest working ensemble on the Utah stage right now. The show is packed with ensemble scenes, and these supernumeraries only get a break during the brief scenes in the Hobbes apartment. It is not unusual for ensemble members to play five different characters, and their versatility is a strength of this production. Whether it was the ridiculous falsetto singing when playing elves in “Happy all the Time” or the superb execution of the soft shoe choreography of “The Story of Buddy,” I found myself rooting for this ensemble’s success. The group also sounded great and made Matthew Sklar and Chad Beguelin‘s forgettable score sound better than it really is.

Kelsey Seaver‘s costumes were an important component to the show, and I appreciated the subtle touches I could find. For example, the tags on the sleeves and the threads closing the jacket vents were a nice reminder that Buddy had no idea how to wear a business suit. My only disappointment in the costumes was that the business attire in the office scenes should have been more upscale and fashionable. But I liked the mobile iceberg set piece (probably the brainchild of set designer Shawn M. Herrera) that served as a surprising technical touch to an amateur production.

All in all, Elf: The Musical is an enjoyable show, even if it is predictable. But the actors really sell the show and make it as sweet as a nice, tall glass of maple syrup.

Elf: The Musical plays nightly (except Sundays and Tuesdays) at 7:30 PM at the SCERA Center for the Arts (745 South State Street, Orem). Tickets are $12-14. For more information, visit www.scera.org.