Tiny Tim’s famous closing line of A Christmas Carol is iconic in any stage adaptation of this most famous book by Charles Dickens. But in Hale Center Theater Orem’s current production, it is especially appropriate. Although the production is not perfect, God bless us for having the option to see it this Christmas season.

Under Jerry Elison‘s direction, the best parts of the play were the crowd scenes, such as the party at Fred’s home and the London street scenes. The entrances of the joyous carolers and the murmur of activity among the supporting actors inevitably created an energy that made each scene bubble with excitement. Elison also excelled at creating lovely stage pictures, especially when the Cratchit family mourned Tiny Tim’s death. Where Elison faltered was in the smaller scenes; whenever there were only two people on stage, they seemed to wander purposelessly around the stage. The result was a loss of connection or intimacy between the actors.

Chris H. Brower stars as Ebenezer Scrooge. Brower’s best moment was when facing the ghost of his former business partner, Jacob Marley. Brower trembled and showed Scrooge’s extreme fear in a realistic manner. Unfortunately, little of Brower’s performance reached this level of emotionality. When Scrooge watched as street urchins were selling his possessions after he died, there was little reaction. Likewise, the final scenes—when Scrooge realizes that he has a chance to save his soul—Brower seemed mildly pleased instead of elated and relieved. More often than not, Brower seemed to be going through the motions of playing his role instead of trying to convey deep emotion. 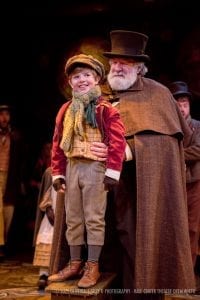 In the role of Bob Cratchit, David Paul Smith is the best thing on the stage in A Christmas Carol. Smith is a believable patriarch of the Cratchits, and his paternal love and concern for the family, especially Tiny Tim, was palpable. The most moving moment of the show was when Smith sang “What Child Is This?” at Tiny Tim’s grave. The clarity of Smith’s voice, and the simple elegance of his performance made the scene supremely touching. Finally, in his scenes in Scrooge’s office, Smith gave Bob Cratchit an affable, everyman quality that made him sympathetic, even before the play showed his family.

Every member of the supporting cast of A Christmas Carol gives a fine performance, but I found myself most charmed by Tanner Sumens as the young Scrooge. Mann’s energy when competing with Dick Wilkins (played by Ty Bikman) was full of youthful charm. Moreover, his nervous interactions and sweet trepidation around Belle (played by Miriam Edwards) were a highlight of the show. I also appreciated the jovial presence of Kyle Baugh as Fred (Scrooge’s nephew) and the expansive performance of Jarom Christopher Brown as the Ghost of Christmas Present. Both of these actors have plenty of Christmas cheer and did much to establish the mood of the play. 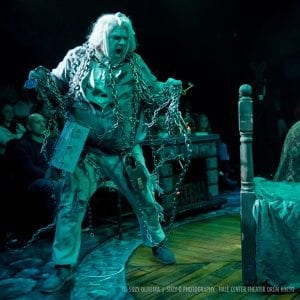 The biggest drawback, though, is the sometimes-clunky adaptation. Ted Lehman‘s script includes some voiceovers from a low-quality recording that are supposed to represent Charles Dickens. After the first few scenes, these drop out, only to suddenly come back one last time nearly two hours later when the last spirit’s visit is complete and Scrooge finds himself back in his bedroom. Additionally, critical moments are rushed (such as the Scrooge’s sorrow over realizing what he lost when Belle broke off their engagement), while other moments take far too long (like Scrooge preparing for bed). Cody Hale has added some nice musical arrangements of traditional Christmas carols and a few original songs have their appeal (especially “Wonderful Time to Love”). However, a few songs slowed down the action (most notably “Hey, Old Joe”).

One of the most appealing aspects of this production, though, was the costume designs by Peter Terry and Dvorah Governale. Every costume is nearly film-quality, and many were a delight to look at. Where Terry and Governale succeeded most was in the scenes in Scrooge’s past; his boyhood was marked by regency fashions, with women wearing empire waist dresses and men in tight waistcoats. But when Scrooge was a young man, the fashions changed accordingly, with women wearing hoop skirts and the men in longer coats. It would have been so easy to just costume everyone in generic 19th century clothing, but Terry’s and Governale’s attention to period fashions made the passage of time easily apparent.

Cody Swenson‘s lighting design was another strength of the show. I especially loved the projections onto nine roundels on the walls of the theater. These projections had the appearance of stylized stain glass, which felt simultaneously modern and classical. The designs changed to reflect the action on stage, with images of the different ghosts being shown as each took Scrooge on his journey. Cole McClure‘s technical direction and sound design did much to establish the mood of the scenes, especially the surprising moment when Scrooge’s brass door knocker took on the appearance of his dead business partner.

While I wish the directing were stronger, and Scrooge rarely reached the peaks or depths of emotion, there is much to love about Hale Center Theater Orem’s A Christmas Carol. The show is an effective way of getting into the Christmas spirit and a safe bet for anyone wanting to reacquaint themselves with this timeless holiday story. God bless the Orem Hale for bringing it on stage again.

A Christmas Carol plays nightly (except Sundays) at 8 PM and Saturdays at 5 PM through December 23, with matinees at 2 PM beginning on December 14 at Hale Center Theater Orem (225 West 400 North, Orem). Tickets are $19-29. For more information, visit www.haletheater.org.