CEDAR CITY — Vanya and Sonia and Masha and Spike, written by Christopher Durang, has everything: great comedy, real problems, fantastic story, and even a quib at Neil Simon. This show, currently playing at the Neil Simon Festival, is a must see.

Vanya, Sonia and Masha are siblings. Masha is busy being a famous actress, and the other two have stayed in the beautiful house to care for their aging parents in their last days. Masha returns with her new young boyfriend, Spike, and conflict ensues among the four of them. In the end, Masha finds her siblings to be constant despite her unsuccessful marriages and is content.

Durang’s script is loaded with references to the works of Anton Chekhov, but these don’t get in the way of the story’s beautiful message. During Vanya’s final monologue, he lectures Spike about how different life was 30 years ago with things like licking stamps and that Spike doesn’t know what the younger generation is talking about. The siblings have so many references Spike doesn’t understand, but it doesn’t matter. Likewise, it is not necessary to understand every Chekhov reference to enjoy this play. 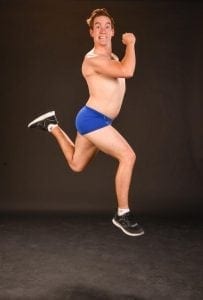 Durang intended for the room to have a large bay window between the audience and the actors so that the actors could stare at the audience as often as possible. Director Ryan “Rev” McLean made wonderful use of this invisible window and had actors come up to the front of the stage and check their makeup in the reflection or look at their outfits (or in Spike’s case, check himself out). Sonia even dragged her hand along the window so everyone could see its semicircular shape.

Scenic designer Michael Harvey kept the set simple, and I appreciated the openness that helped it seem more like a mansion. He put some large blossomed cherry trees (an obvious Chekhov reference) behind the upstage windows of the house, and the characters talked about these trees often. There was also a platform with two steps down that allowed for better levels during the blocking and stairs going up one side.

The acting in this production was so good. Kirsten Sham (playing Sonia) and Trevor Messenger (playing Spike), were my favorite performers. Kirsten Sham had perfected the depressive and volatile mood of her character, so that when she smashed a second cup of coffee on the floor and stared out at the audience for a beat after, I hurt my sides from laughing. Spike had such a childishness about his attractiveness. He took off more clothes than he put on,  and flaunted every moment of it. During a scene change, he was seen going on his jog behind the set in just his little jogger shorts, and did some showing off with jumping jacks and a judo roll. That result was a fun minute and a half. Spike’s excitement for life has made me want to go home and have that joyful energy every day. 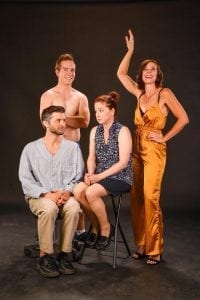 Vanya was played by Kade Cox, who had the best monologue in the show. There were so many good monologues but this was the longest and he did such a great job with the repetitive parts, making it feel like I was riding on a merry-go-round, spinning faster and faster. Each time he mentioned licking stamps, his speech got more intense until he reached the moment where he talked about how hard it is to dial 990999 on a rotary phone, he used so much emotion and intensity that one of the older audience members shouted out, “IT’S TRUE!”

Masha, played by Alyson King, was perfect for her tole, and I love how her emotions matched her costumes. She came in confident and flamboyant with a silky frilly outfit, and changed to angry and jealous with her unattractive Snow White costume. She ended the show with poise and groundedness in a nice blouse and jeans. Masha looked so much different than in her previous costumes that when she didn’t freak out at Spike cheating on her, I realized she had matured. Thanks to Amber Chavez, the costume designer, this was all possible.

Nina was played by Olivia Sham, who had a sweet and endearing countenance and kept her childlike energy that buoyed the others up. One of her lines at the end, “You must always get your hopes up,” was said so sweetly, I wanted to hug her. Cassandra was played by Isabella Giordano, who gave an amazing performance. When had a fiery look in her eye and stood upon a pot (which she was supposed to put away) like a soapbox and began her doom and gloom future preaching, I was beside myself. And when she did the weather forecast for the end of the world so chipper and smiling, it was such a funny contrast to the words she was saying. Cassandra also made voodoo seem way less creepy and much more fun.

Durang wrote an amazing script in Vanya and Sonia and Masha and Spike, and I hope everyone gets to see it sometime in their life. I’m also so glad I got to see it at the Neil Simon Festival this year with such a quality performance.

The Neil Simon Festival production of Vanya and Sonia and Masha and Spike plays various dates at either 2 PM or 7:30 PM through August 11 at the Heritage Center Theater (105 North 100 East, Cedar City). Tickets are $10-15. For more information, visit www.simonfest.org.