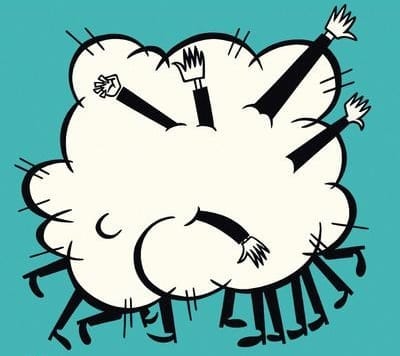 SOUTH SALT LAKE — Every August the Utah Children’s Theatre produces a Shakespeare Festival for Kids and Adults with Short Attention Spans. Ever since I discovered this annual event, I have selfishly assigned myself to review these productions. Shows like this year’s Comedy of Errors are why I keep coming back to this hidden gem of a theatre festival. 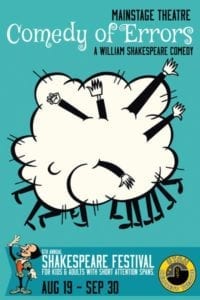 The Comedy of Errors tells the story of two sets of twins, one pair named Antipholus and one pair named Dromio. The Dromios are servants to the Antipholuses, but each set of brothers has been separated by a shipwreck many years before the play began, with one set settling in Ephesus and the other settling in Syracuse, and neither group knowing the fate of the other. When Antipholus of Syracuse and Dromio of Syracuse visit Ephesus, they are greeted very warmly by the townspeople, who mistake them for the visitors’ long-lost brothers. Meanwhile, Antipholus of Ephesus and Dromio of Ephesus suffer a string of misfortune because of the confusion their brothers’ visit has caused.

Shakespeare’s shortest play has been slimmed down even further, to about 90 minutes (including an intermission), in this production. Director Joanne M. Parker made other minor changes have been made to the script to clarify the confusing action. Shakespeare purists may scoff at these changes, but all the changes customized the play for its audience and for a modern time period. I appreciated the reminder that Shakespeare’s plays are not an unchanging holy canon. Instead, the best productions know how to use a light touch in adapting the Bard’s words for a new generation. This Comedy of Errors hits the sweet spot by remaining unmistakably recognizable as Shakespeare, but still easily accessible to its audience.

But the biggest directorial choice was to make the play as zany and packed full of physical comedy as possible. Very few scenes pass without some slapstick humor, or actors chasing one another, or some other silliness that emphasizes the sheer joy and humor of the play. As a result, I heartily laughed at several scenes, even though I’m not a fan of this play and normally don’t appreciate physical comedy. One of my favorite moment was the sheer desperation of Dromio of Syracuse (played by Sean Sweeney) as he pleaded with the audience to help him escape the romantic overtures of the hideous kitchen wench Luce (played by Lexi Thomsen). I also loved the craziness of Antipholus of Ephesus (played by Oran de Baritault) using a fish to fight off the soldiers.

Much of the verbal humor of the play is based on the characters’ confusion. My notes have a lengthy list of where the lead actors played up this confusion well, and I cannot recall a moment where the confusion felt repetitive or tiresome. But the actors seized on other character moments that the script provided them and created more depth for their character. One such moment was when Antipholus of Syracuse (played by Bryson Dumas) professed his love for Luciana (played by Larissa Anderson), which provided a spark of emotion in an otherwise nonstop farce. As Dromio of Ephesus, Tennessee Tarrant had a boundless energy that livened up every scene he was in.

Set designer James B. Parker created a symmetrical set that matched perfectly with the symmetrical structure of the script. The eight doors on the set also made gave the actors plenty of opportunities to have rapid entrances and exits, giving much of the play a farcical feel. The light pastels of the set provided a bright setting that fostered a cheery mood for the play.

So, go see Comedy of Errors. While you’re at it, take your kids. Take your friends, and take your friends’ kids. Then, give the other events at this Shakespeare Festival—including a 45-minute Romeo and Juliet production, a Shakespeare puppet show, and plenty of fun of games—a try.

Comedy of Errors plays every Saturday at 1:30 PM through September 30 on the Mainstage Theatre at the Utah Children’s Theatre (3605 South State Street, South Salt Lake). Tickets are $10-15. For more information, visit www.uctheatre.org. 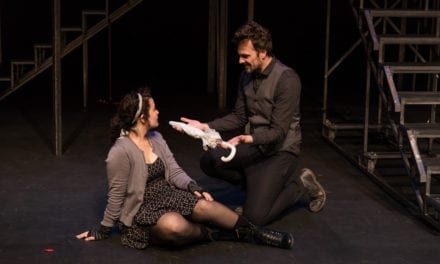