SOUTH SALT LAKE — The Utah Children’s Theatre production of Romeo and Juliet is like the main characters’ relationship: short but worthwhile. And don’t let the venue fool you. This isn’t just a production for kids. Teenagers and adults can enjoy this Shakespeare production, too. 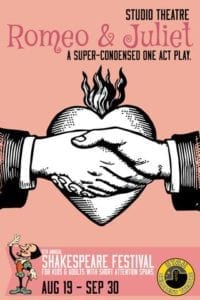 With a 45-minute running time, this production of Romeo and Juliet trims the play to its essentials. Gone are Mercutio’s “Queen Mab” speech, Lady Montague, Juliet’s father, Paris, and more. As a result, the story is easy to follow, and the speed of the play makes Romeo and Juliet’s love affair seem even more turbulent. Director Landon Kracek served this script cutting well by staging the scenes to emphasize clarity. Swordfights were designed to heighten the danger and tension, and the physical closeness of Romeo and Juliet quietly reminded the audience of the characters’ affection for one another. I also appreciated the way that Kracek had the scenes flow smoothly into one another, allowing no time for the mind to wander between scenes.

The brisk pace doesn’t have much time to develop characters. That’s why I was pleasantly surprised to find that Luke Vayo and Abbie Dean made Romeo and Juliet interesting characters. Dean appears closer to Juliet’s age of 12 years old than most performers in the role, and she made Juliet childlike, naive, and sweet. The actress made it easy to see why Juliet would get swept into a dangerous relationship. Luke Vayo’s Romeo is mature and a natural leader, whether he’s with his friends or with Juliet. The two seem to have an easy fondness with one another that serves the story well.

Additionally, Brooke Wilkins is enjoyable as a commanding Lady Capulet who can really put Tybalt (played by Bryson Dumas) in his place. Her commanding presence also made her decision to force Juliet to marry Paris so forceful that it was almost cruel—a take that I haven’t seen in the character before. And Zach Vayo‘s pleas for the swordfight between Tybalt and Mercutio to stop added to the tragedy of that scene.

Another added treat was the period costuming designed by Meighan Smith, Cathy Maurer, James Parker, and Christina Wilson. Given the drastic cutting of the script, keeping the show set in 16th century Italy was a smart choice that strengthened the production’s ties with Shakespeare’s era. (But I’m a sucker for Renaissance costumes.) James B. Parker‘s lighting was also effective in showing mood and the passage of time, two important pieces of information in a production that moves so briskly.

In sum, nearly everything about this production of Romeo and Juliet was done right. Audience members of all ages who want a quick shot of Shakespeare can enjoy this show. And if you can’t bring a kid, I know from firsthand experience that the folks at the Utah Children’s Theatre won’t turn you away if you don’t bring a child along.