CENTERVILLE — 9 to 5 is a musical that debuted on Broadway in 2009 and is based upon the 1980’s movie of the same name. Music and lyrics are by Dolly Parton, who starred in the original movie, and the book is by Patricia Resnick. CenterPoint Legacy Theatre in Centerville has decided to bring the story of three women working and hating their boss to their stage for their end of number show.

Now, here is where I make a confession. While I am definitely a child of the ’80s, I have never seen more than clips of the original movie, nor have I seen a production on stage, therefore except for the catchy theme song that most everyone is aware of, this was a new experience for me.

The main plot centers around three women, Violet Newstead (played by Wanda Copier), Doralee Rhodes (played by Lori Rees), and Judy Bernly (played by Annie Ferrin), as they deal with their cruel and difficult boss, Franklin Hart Jr. (played by Mike Brown). As the show began, I was concerned because the music was much louder than the vocals, and the sound balance was quite inconsistent. This persisted for the first few songs, but was thankfully rectified by mid-act.

Other than the sound balance, the technical aspects of this show were strong. Set design by Ricky Parkinson was interesting and innovative. The choices used to develop the different spaces, from the office to the homes to even the restroom were beautiful elements, and lighting design by Michael Gray added to that ambiance. Costume design by Janell Roundy was authentic and impressive. Getting the right look for an office in the late ’70s without becoming too campy is a real challenge, and Roundy was able to meet that delicate balance. 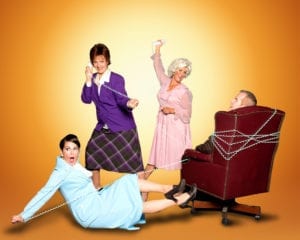 The ensemble excelled at the choreography by Susan S. DeMill, and the numbers that started the show were full of impressive precision in their movements. Several of the ensemble had the opportunity to show dancing skills and strength. Additionally, the music, directed by Maurie Tarbox, was especially strong in numbers such as “Shine Like the Sun” and “Change It.”

It was clear that the three main women were the true stars of the show. I found it slightly ironic that a show about how the “lower secretaries” excel more at the job than the sexist, egotistical boss, also had the element of the three female actresses standing far above their male counterpart. Brown as mean boss Hart was slightly lackluster in the role, and as an actor he did not add much to the role it. By contrast, Ferrin as Judy was spectacular, and her act two show stopper, “Get Out and Stay Out” was an integral part to what makes this show a worthwhile production. The three ladies have several numbers in which their chemistry contributed to strong performances. In the first trio, “I Just Might,” Ferrin, Copier, and Rees complemented each other well and that chemistry continued through numbers such as “Shine Like the Sun” and “Change It.” 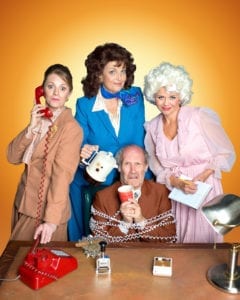 One pleasant surprise was Russell Walker in his portrayal of Joe. He had been a pleasant addition in all the scenes he had been in, but did not sing until the second act number “Let Love Grow.” It was that that point that Walker really shined, and I confess I found myself wondering what it would have been like if he had played the role of Hart with his strong vocals.

The show itself is an interesting look at the difficulties in the workplace, and sadly is still a timely topic even though this movie is set in the same year that I was born, 38 years ago. In the director’s note in the program, Tarbox mentions how many of the cast have discussed how they still face similar issues in their current work. This is the beauty of theatre, and having a strong local theatrical community. As a divorced working mom, it is nice to come see a show that identifies with my own personal struggles, just as it is nice to go see a show that is as far from my life as possible. This production was a fun way to try and connect many of us from different walks of life and look past initial judgments and see talent, skill, and hard work.

9 to 5 plays at CenterPoint Legacy Theatre (525 North 400 West, Centerville) nightly (except Sundays) at 7:30 PM and on Saturdays at 2:30 PM through September 2. Tickets are $14-26. For more information, visit www.centerpointtheatre.org.

A story of the dead full of life in BLITHE SPIRIT