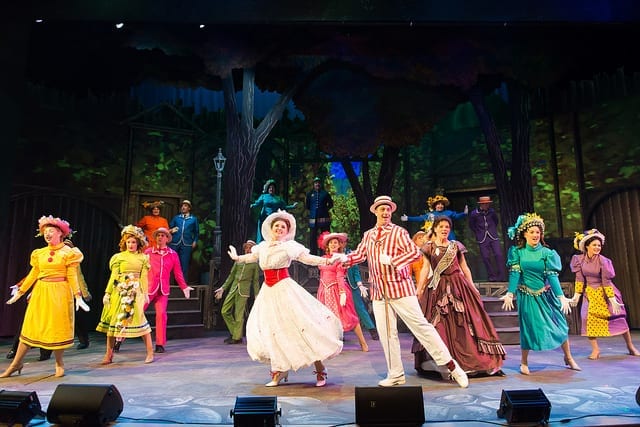 CENTERVILLE — A classic adaptation from the silver screen in 1964, Disney and Cameron Mackintosh’s Mary Poppins debuted on Broadway in 2004.  Not only does the stage adaptation include a few new numbers in the score (with music by Robert B. Sherman, Richard M. Sherman, and George Stiles and lyrics by the Sherman brothers and Anthony Drewe) such as “Playing the Game” and “Brimstone and Treacle,” it brings additional depth to each member in the Banks family.  George gets a deeper backstory in Julian Fellowes‘s script, revealing the origins of his inclinations toward precision and order.  Jane and Michael have plenty of scripted opportunities to show just how naughty they can be.  Meanwhile, Mrs. Banks struggles to find herself within her role as wife and mother.  The new details give familiar characters an opportunity to progress throughout the story in a way that the original movie, which placed a stronger focus on the adventures with Mary Poppins, did not support.  Still, there is no shortage of whimsy, fantasy, or adventure as the musical version nods to the familiar moments through which Mary Poppins captures its own iconic history.

Having seen several productions of Mary Poppins, I couldn’t help but go into the evening with a list of preconceived notions and a few expectations.  I was ready for an intense section of choreography in “Supercalifragilistic,” which I assumed would be full of precision arm movements designed to mimic each letter.  I wondered at the technical elements that would be used to raise “Step in Time” metaphorically to the roof.  I anticipated a picturesque Poppins ascending via umbrella into the rafters.  I have to admit to feeling the occasional pang of disappointment as I let go of the traditional moments: the hand sequence was replaced by underwhelming alphabet blocks, “Step in Time” pulled out no new stops, and Mary’s fly system was too prominent and cumbersome to leave room for the idea of magic.  Despite these occasional let downs, I was grateful to be watching something that felt new as director Danny Inkley brought his set of fresh ideas to the production.

The thing I found most consistent throughout the evening was the production’s tight rope balance between taking a short hop to fantastic or a quick drop to disappointing.  For example, I was immediately stunned by the beautiful projected backdrop (presumable coordinated by set designer Joshua Roberts and lighting designer David Reese) and the steam gently rising from its chimney.  The projection technology allowed Bert to change the seasons by simply blowing the wind from his hand.  However, as I came to realize that every background would feature some sort of motion, such as blowing leaves or falling snow, this impressive element became a distraction.  The many diverse entrances and exits to the stage facilitated quick changes from one scene to the next and a level of sneakiness essential to delivering the show’s magic.  However, the fully furnished one-story bedroom that rose from the stage brought the energy to a sudden halt each time it ascended or descended. The inconsistency continued in the cast’s vocal delivery as well as acting prowess.  Thanks to music director Derek Myler, harmonies throughout the evening, often featured prominently in small group numbers, were impressively balanced.  Sadly, prominent solos such as that of the bank director fell noticeably behind the song’s timing.  While Winifred Banks (played by Shawnee Kennington) delivered accuracy in her notes and rhythms, I had difficulty enjoying “Being Mrs. Banks” through her unfortunately strident vowels and nasal tone.  Additionally, much of the characterization crossed over into caricature, leaving nuance by the wayside. While Kristina Boler’s interpretation of Ms. Andrew, the nanny not-so-affectionately known as “The Holy Terror,” felt more obnoxious than cruel, David Marsden as George Banks more than made up for it when he yelled at his children after being suspended from the bank.  Emotional moments, whether highs or lows, seemed to push the limits of practicality, making it very hard for me to relate to the characters. Compliments must be given, however, to the young actor Wyatt Moody, who was tasked with delivering Michael Bank’s comedic lines.  Not only did his timing strike an ideal balance between practiced and natural, but his attention to diction and projection ensured not a word was missed. Another impressive feat was the cast’s ability to think quickly to cover mistakes made throughout the night.  A table unfortunately got damaged during one scene, and I was impressed to see it reappear later, restored to its original form. Boler and Aaron Ford (the latter in the role of Bert) adapted well to a microphone malfunction during prominent solos. Although little could presumably be done to fix the root of the problem in the moment, sound technicians Doug Cauldwell and Shane Steel did what they could to mitigate the resulting balance problems.  Several actors wisely deviated from blocking to pick up items dropped on the stage throughout the show. While these errors did not ruin the evening for me, I was unimpressed that there seemed to be such obvious mistakes at all.

Looking back on the show, my favorite moments were the ones during which my nine-year-old son leaned over and whispered in loud awe, “How did they do that?”  The mystery of Mary Poppins’s bottomless carpet bag played out beautifully as she moved it from place to place in the room, pulling large objects out with practiced ease.  And while my adult mind accounted for a thin string attached to the red kite that Michael used in “Let’s Go Fly a Kite,” my son bought the illusion completely.  The beautiful moments throughout this production stood out as memorable and unique; unfortunately, they were so frequently followed up with a moment that just didn’t work.  By then end, I couldn’t help but consider the multiple connotations of the show’s theme, “Anything can happen if you let it.” 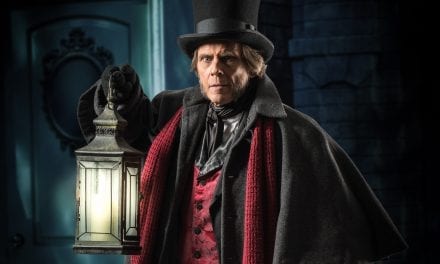 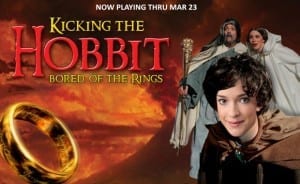