LEHI — I love small intimate theaters. So, I was instantly drawn into the cozy theatre at Lehi City Arts Council where I attended Little Women, directed by Jacob Porter. After finding my seat I took in the atmospheric smell of popcorn mixed with the faint hint of freshly painted backdrops. As I waited for the show to start I read the playbill and cast biographies. I became more excited as I discovered some of the strong performance backgrounds of various cast members. I would not be disappointed as the night wore on.

Little Women is a musical with book by Allan Knee, music by Jason Howland, and lyrics by Mindi Dickstein. It is important to emphasis that it is based on the novel by Louisa May Alcott., and there are some different scenes and changes from the book. The musical follows the memories and tales of Jo March and her sisters. Jo dreams of being a writer, and the show starts with her living in New York and pursuing her writing.  The scene shifts back to the past and then follows a more chronological order to the original tale. One of my favorite additions this script makes to the original tale is the acting out of scenes from Jo’s stories as she reads them aloud.

As the Lehi Arts Council’s production of Little Women began I was instantly struck with high level of energy brought to the stage, especially by Mckelle Shaw as Jo March. Jo and Professor Bhaer, played by Juan-Hector Pereira, launch into arguments in the first scene. Being familiar with the outcome of Jo’s and the Professor’s relationship, I would have like to have felt more of curious intrigue between them, especially from Professor Baer. However, by the end of the production I was content with the chemistry between the two.

Nevertheless, there are some truly delightful relationships in this production. I especially enjoyed the relationship between Jo and Beth, played by a perfectly cast Emily Maria Bennett. She was incredibly sweet, and yet Bennett brought a bit of daring that I haven’t ever seen in Beth before. Bennett did well at playing a healthful young woman, and then an invalid later. There is a reason Beth is a beloved character; she is sincere, unfailingly kind, and unselfish. Bennett did a beautiful job of capturing all of those qualities in her performance of Beth.

Another performance that successfully captured the character was from Kaden Matthew Caldwell as Laurie Laurence. Jo often makes remarks about Laurie’s grin, and Caldwell had the ideal mischievous boyish grin. Additionally, Caldwell’s bouncing mop of hair seemed to emphasis Laurie’s buoyant personality. From the moment he congratulated Jo on her daring in cutting down his grandfather’s tree, to his recounting of his adventures in Europe, I enjoyed the energy and life Caldwell brought to the stage. Also, though Camille Cook was was surprisingly young in the role of Aunt March (the great aunt to the March girls), Cook did an impressive job in being a commanding, powerful influence in the lives of the March girls.

One of the real strengths of this production is the consistency throughout the vocal performances of every cast member. I was impressed to find so many talented vocalists in a community production. Often in community theatre, one or two performers carry the show vocally, but that was definitely not the case here. While I did enjoy some songs more than others (especially Pereira’s rendition of “How I Am” and his duet with Shaw in “Small Umbrella in the Rain”), I found all songs to be equally strong in the quality of vocalists. However, I wish that the background music hadn’t been so loud because I couldn’t hear some of the performers, even though they were singing out. I hope that the sound levels are better for future performances because there were so many talented people I wanted to hear better.

Nancy Cannon’s costume designs were quite beautiful. However, I wasn’t sure that several of the March women’s dresses should be so fancy, as they are supposed to be a poor and humble family. For example, the off-the-shoulder ballgowns were fashionable and lovely for the time period, but I felt that they were a bit extravagant for the March family. It also appeared that Jo’s dress was falling off her shoulder, a wardrobe malfunction that revealed her corset and made her appear like an old west saloon girl instead of a tomboy girl raised by a humble modest family.

On the other hand, I loved the brown and red dress that Meg (played by Rachel Ryan Nicholes) wore during the proposal scene. It was beautiful and very flattering, though perhaps too fancy for a governess from a poor family. Although some costumes were a bit elaborate, I did think that the costumes for Aunt March and Amy’s European dress and wedding dress were stunning and perfectly appropriate. This would have been a difficult show to design for as costume changes have to be made quickly, and sometimes on stage during set changes. There were a few opening night glitches with costumes, but overall the need for quick changes was well met.

There were other artistic choices that surprised me as well. Often cast members turned their backs on the audience more frequently and longer than was comfortable. For example, after Jo refuses Laurie she turns away from the majority of the audience. I wanted to see her face and know what was going on. I’m sure that Shaw’s face was full of interesting emotional expression, just as it was during the rest of the show. But, unfortunately, no one was seated in the area that she was facing. This may be a difficulty of staging a play on a thrust stage with the audience surrounding it on three sides, though. Another moment I wanted to see more from Shaw was when Jo discovers that Amy, played by Hannah Roskelley, has burned her manuscript. Jo’s reaction seemed to lack the passion found in the rest of her scenes. But, as theatre goers know, not every performance is the same and I would be curious to see that scene again. Shaw’s passion came through in the melodramatic enactments of her stories. They were perfectly coordinated between Jo reading the lines and her characters speaking the lines. I also loved her listeners’ reaction as her stories played out. These scenes were so much fun, and definitely among my favorite parts. I loved seeing into Jo’s imagination like I’ve never been able to do before.

Overall, I had a very enjoyable experience while attending Lehi City Arts Council’s production of Little Women. With a well selected cast of incredibly talented cast of vocalists, there is much to appreciate in the production. As a lover of Alcott’s original work there were parts of Knee’s script that disappointed me, but there were some moments that I highly enjoyed being told in a new way. Although the two and a half hour run time may be long for younger audience members, the message of the story is appropriate for all ages. If you love listening to beautiful voices and are curious about the musical version of this story, I recommend attending Lehi City Arts Council’s musical production of Little Women. 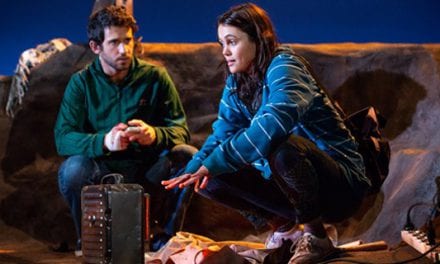