ST. GEORGE — Fourteen years ago, St. George Musical Theater presented The Scarlet Pimpernel, and it was a huge success. Despite a love for the production—or more likely because of it—Bruce Bennett, CEO of SGMT, says they’ve been waiting for the right time to bring The Scarlet Pimpernel back, a time when the proper talent and artistic direction could do the production the justice it deserves. After seeing the accumulation of acting, singing, dancing and costuming talent on display for the next month at the St. George Opera House, it is clear now is the right time.

Set during the horrifying yet intriguing period known as the Reign of Terror (France 1793-1794) and based on a novel by Baroness Orczy, The Scarlet Pimpernel tackles the upheaval in France when more than 16,000 prisoners deemed to be “enemies of the revolution” were executed by way of the guillotine. The only thing standing between French aristocrats and their ill-justified demise is the antics of Sir Percival Blakeney and his team of Bounders operating under the moniker of the Scarlet Pimpernel.

Percy Blakeney (played by Jadon Webster) is recently wed to the former French starlet Marguerite St. Just (played by Brooke Bang). The pair’s love story is cut short when each begins to question the other’s love and loyalty, thanks to a man from Marguerite’s past: Chauvelin (played by Caleb Christensen). Chauvelin’s involvement in the execution of prisoners and his desire to enlist Marguerite’s help puts a wedge between Percy and Marguerite that grows wider as the devastation in France picks up steam. 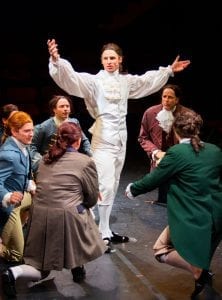 One of the many great aspects of this show, especially for the male actors looking to strut their stuff, is the breadth of personality and acting styles each male role requires. Percy and his Bounders must play the savvy, sneaky, courageous heroes during their attempts to intervene in the revolution in France. But at home in England they must maintain their cover by pretending to be the fanciest of fops.

It is here that the production elicits some of its biggest laughs. Adorned in costumes that can only be called flamboyantly exquisite, Percy and his pals sing about “The Creation of Man,” citing peacocks and roosters and other animals as the reason why the male species should be most concerned about its appearance. Such a scene could only be executed with the proper fashion, and the backing of a strong male cast — luckily St. George Musical Theater’s production has all of that in spades. Led by Webster’s melodious and powerful voice, the Bounders showcase the kind of vocal strength and enthusiasm that would make any professional theater company jealous.

Webster’s disarming and believable portrayal of the title role cannot be overstated. From the agonizing phrases in “Prayer” and “She Was There,” to the courageous and catchy “Into The Fire” and “The Creation of Man” Webster embraces the role in every moment that Frank Wildhorn‘s score and Nan Knighton‘s lyrics give him. 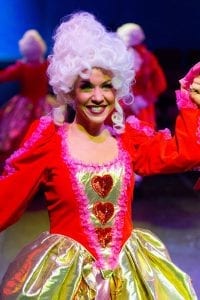 Playing opposite Webster is Brooke Bang in the role of Marguerite, reprising her role from St. George Musical Theater’s past production. Time has not altered Bang’s ability to connect with the audience as the sweet, yet somewhat mysterious Marguerite. In fact, if anything, her performance has gotten better with age. Beautifully adorned in lavish period dresses, I really get a sense for the loss Marguerite feels when Percy — distracted by his efforts overseas and conscious of his decision to keep Marguerite in the dark about his antics — pulls away from her emotionally just hours after they have wed. Bang garners sympathy in her attempts to distance herself from her past—and from Chauvelin—making it easy to root for her as the play reaches its climax.

On the opposite side of this somewhat disjointed love triangle, Chauvelin has the monumental task of appearing stoic and foreboding as one of the leaders in the terror in France during songs like “Madame Guillotine” and “Falcon in the Dive,” while at the same time singing one of the more seductive songs in the production (“Where’s the Girl”). Caleb Christensen’s portrayal of Chauvelin did well in the stoic and foreboding part, but could stand to improve, if only a little, when it comes to the seduction. This is not to say his vocal talent was lacking. His deep, commanding voice resonated throughout the theater, but there were times when the emotion was buried a little too far beneath the stoicism. Marguerite should feel pulled toward him against their will in the titillating “Where’s the Girl” but it never quite reached that point.

Presented in the round under the guidance of director Kyle Myrick, the scenery for The Scarlet Pimpernel is minimal, albeit effective. The pieces that deserve spotlight — such as the guillotine — do well under the lights. Yet it is the costuming that emerges from being part of the backdrop to become almost a character in and of itself. Costume designer Sammy Myrick and assistant costume designer Grace Wells deserve high praise.

There is not a weak member of the cast at any point throughout the night, making St. George Musical Theater’s The Scarlet Pimpernel another of the many highlights in the community theater scene in Southern Utah. It is definitely a show not to be missed.