LUCKY STIFF at the Sandy Hale is more stiff than lucky 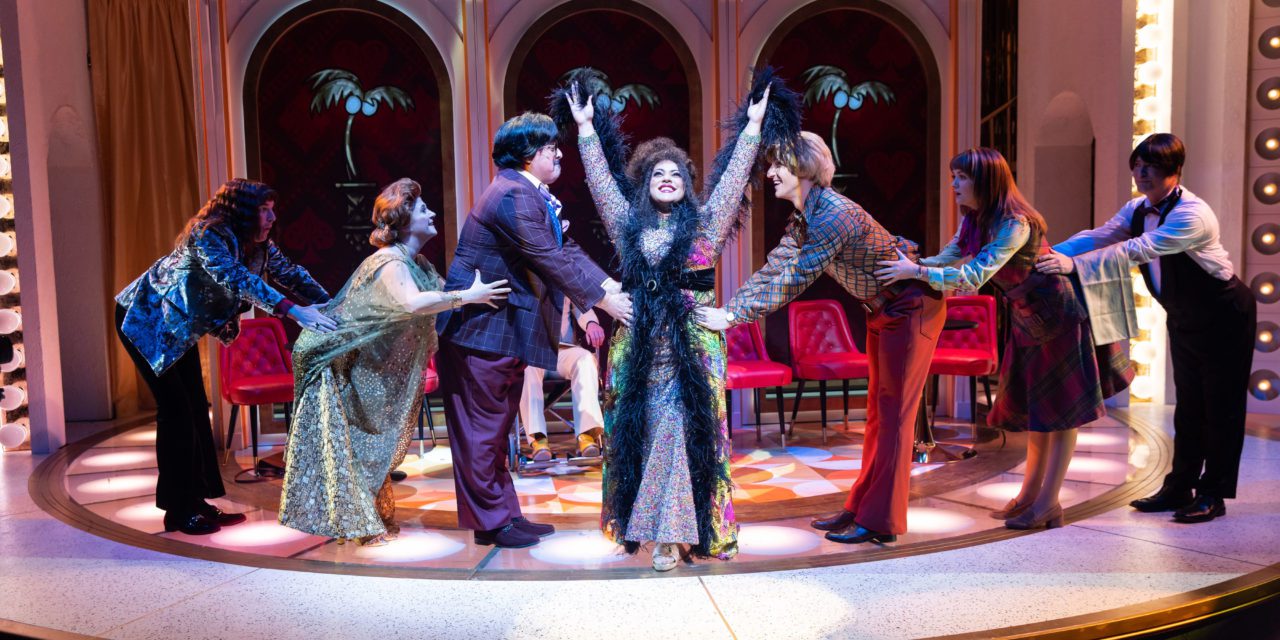 SANDY — “Everything is fine,” sings the cast of Lucky Stiff at the Hale Center Theatre. Though this farce was full of opportunities, it left me and the two people who came to see the show with me, lacking laughter. Lynn Ahrens wrote the lyrics and script, with music by Stephen Flaherty, and all three components are lacking. I wanted to love this production, and I wished every scene had the right comedic timing, the best acting, and gorgeous singing. But the material and performances seemed to work only about half the time.

The cast in Greek chorus form begins the show singing, “Something Funny’s Going On,” and introduces the plot: A man has been killed by an unknown woman with a gun, and the audience can expect to hear about dogs and shoes. ​Then it jumps into the action where Harry, an Englishman in his 30’s, is bored with his job as a shoe salesman. But when he arrives at his dumpy apartment, he has a telegram telling him to meet at a law office. Turns out his uncle passed away and left Harry a fortune to be earned by taking his dead uncle’s body around on vacation in Monte Carlo for a week. Reluctantly, Harry agrees, just to get out of being in a job he hates. A representative from the Universal Dog Home follows him around to make sure he does not breach the contract, because if he does, the money “goes to the dogs.” His uncle’s former mistress also follows him, wanting the money for herself because she was the co-conspirator with her uncle in obtaining it. She drags her brother into the mix and chaos quickly ensues in the Monte Carlo hotel. 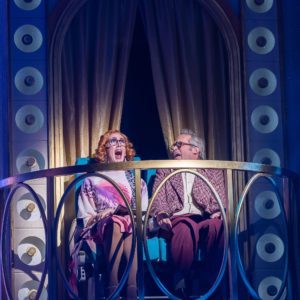 ​Though Ahrens’s story line was easy to follow (dead guy wants vacation), the details were not. Lucky Stiff gives a lot of details in a very short span of time, and many tidbits do not make sense to the rest of the story, or are not that important. For example, Rita says she “accidentally shot” Tony (Harry’s dead uncle), but she also says she did it because she thought he was cheating on her. Throughout the show she is often waving the gun around, yet nobody else gets shot; it seems the story builds up for another accidental shooting, but none happens. Another example is the show spends a long time building the relationship between Harry and his uncle, yet the relationship is dropped without a thought by the end. These things could simply be farcical elements; maybe it is supposed to be funny that things do not make sense. But for that to work, the cast would have needed to be better with their comedic timing and characterizations. 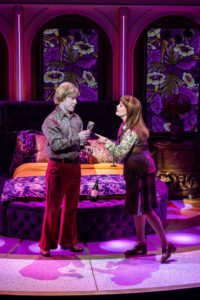 Director Jim Christian did a wonderful job directing a challenging play, given the overly obvious humor in the lines and the plot issues. I loved the dream scene with the neon colors and the dogs. (Seeing them floating around in the dark in synchronized dance was entertaining and creative, and was vivid enough to give me nightmares!) Christian made good use of the big, beautiful stage and had groups of actors on different levels and downstage for certain moments, like a group bouncing along with their hands holding an imaginary subway rail off to the side downstage of the group in the apartment. I also loved how Christian had the actors move the dead guy’s head or arm to add humor to the scene.

However, there seemed to be so many lines and songs that were supposed to sound funny, but just lacked the right timing or delivery to have brought more laughter. My husband asked me partway through if the show was supposed to be funny, and I assured him it was, but was similarly confused why we were not laughing. I think the lack of humor came from the direction, but partially acting as well.

One of the biggest scenes I was disappointed with was in the Club Continentale, when Dominique du Monaco (played by Corinne Adair) was supposed to be seductive and sensual, but she was given an overly gaudy dress that had no sex appeal, and most of her beginning performance was all standing in place. Without sex appeal, it is a very boring song. And that scene was emblemantic for the whole production: there was a lot of pointless gaudiness.

The best actor in the cast, by far, was Jeffrey Whitlock, playing Vinnie Di Ruzzo (Rita’s brother). Vinnie has a song where he explains to his wife why he will not be home for dinner, and I enjoyed every moment of it. Whitlock’s facial expressions, his reactions to what he hears on the phone, and the way he sang his response were just golden acting. He also made a skilled character arc and change by the end of the show. Rita (played by Kristi Curtis) was a strong character, but lacked humor. Under Christian’s directing, Curtis was often shifting around the stage and not focusing on the audience, such as during “Rita’s Confession.” Her accent was fun, but it also seemed too over-the-top for her character to be believable, and a lot of the humor depended on seriousness in character.

Austin Dorman played Harry Witherspoon, and he was pretty good, though his accent was faltered at times. Dorman’s singing was amazing, and I appreciated the tidbits he added, like his freak-out noise he made while putting his bell-bottoms on and squealing while making them jiggle, which was very funny. I do wish Dorman had varied his emotional portrayal so that there could be a contrast. Harry was overly stressed and angry and scared from beginning to end, and it just seemed like he was yelling all the time. Moreover, he did not seem very out of place in the fancy hotel.

Harry’s counterpart, Annabel Glick (played by Morgan Fenner), the dog home representative, was also emotionally disappointing, though I enjoyed how well she sang, “Times Like This.” For the humor to work, Annabel needs be more collected and self-assured. One inhibiting aspect of her performance was the odd way Christian directed Dorman and Fenner together, such as when they are playing tug of war with the dead guy on his wheelchair, or when they wake up on the opposite edges of the bed. Additionally, their harmonies often blended poorly, but that could just be the way Flaherty wrote the music, possibly to add humor. But for me it was just painful to listen to and sounded bad.

The general rule to making a comedy or farce work is to take it very seriously in acting and directing because the characters usually have so much at stake (six million dollars, in this case). Any kind of fakeness in the emotion diminishes the characters and the performances. It is still worth seeing Lucky Stiff, and the show is not without its charms. I loved Dennis Wright‘s costumes (except for Dominique’s), and I loved Kacey Udy‘s sets. I just wish this production of Lucky Stiff could have come together better. The show can probably be hilarious with just the right touch.

Lucky Stiff plays nightly (except Sundays) at 7:30 PM and Saturdays at 12:30 PM and 4 PM through November 19, with an additional performance at 4 PM on Friday Nov 11 at Hale Center Theatre (9900 South Monroe Street, Sandy). Tickets are $25-64. For more information, visit hct.org. 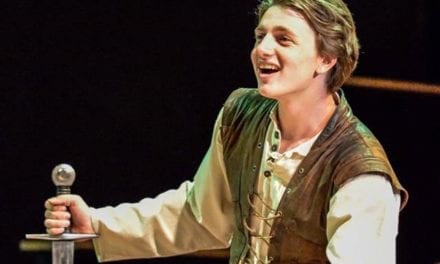 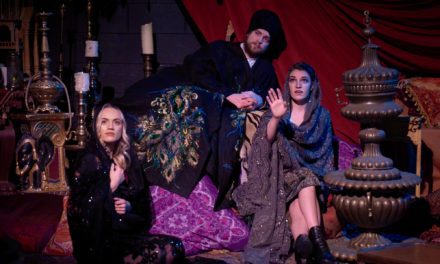 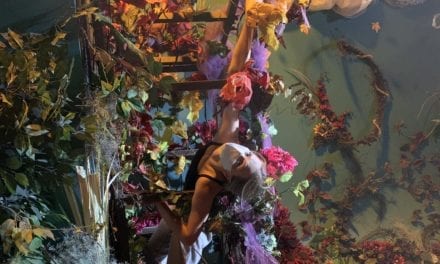