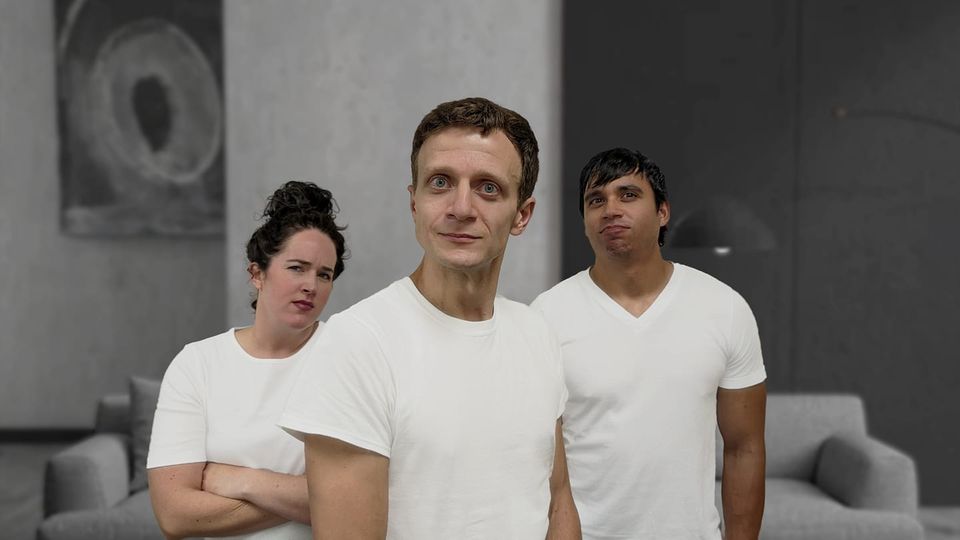 PROVO — Most people do not understand abstract modern art; everyone else pretends they do. That could be the thesis of Art, a play written in French by Yasmina Reza in 1994 and translated into English by Christopher Hampton. The script has won numerous accolades, including a Tony for Best Play. Art centers around Marc, Serge, and Yvan, who have been friends for 15 years. When Serge buys a painting that is white paint on a white canvas for 200,000 francs, Marc is outraged by her friend’s stupidity. As they bicker about their artistic and then personal differences, Yvan tries to calm his friends down with no success. Essentially, the show is about people so smart that they mistake empathy for stupidity and insolence for intelligence.

It makes sense that a company that is philosophically inclined, such as An Other Theater, would produce Art. An Other Theater has been sharing fringe work in Provo for the past five years. Their current production of Art, directed by Kacey Spadafora, is a welcome addition to the theater’s repertoire. Plus, there is no better place to stage a play about art than the Covey Center, which is part-art gallery, part-theater. The center pairs the visual and dramatic arts in an interesting way, and it was pleasing to see that pairing continue into the show.

Honoring An Other Theater’s commitment to inclusivity, Spadafora cast Alexis Boss as Marc, who is usually played by a man. Boss played the role with all the right snobbery. She did not give herself away to theatricality, but that means she did not give herself to the audience either. I wished she would have been more energetic and emotionally available to the audience to compensate for the character’s closed off in relationships on stage. Theatre is special when it bends reality just the tiniest bit so that the audience can see a character have a moment of transcendence that they might not have had in real life. Boss was so fixed on her character’s snobbery that she closed off Marc’s opportunities for growth.

I felt similarly about Brian Kocherhans as Serge. He embodied the egotistical intellectual, but not an egotistical intellectual who also happens to be long-standing friends with Marc. Even with their asides, I did not feel believe they cared about each other, which made it difficult for me to connect to the characters or their conflicting points of view. Without that investment, most of the show felt like a screaming match that could have been avoided if these people just did not spend time together. At one point, Yvan asks his friends why they see each other if they hate each other. I wondered the same thing.

John Valdez as Yvan brought some needed contrast to his bellicose friends. Yvan’s people-pleasing nature injected comedy into the characters’ debates about art. I laughed when, in the middle of an argument, Yvan says that he is so upset by his friend’s rudeness that he could cry. Marc and Serge pause their fighting, lean toward Yvan in their chairs, and demand that he cries. It was this hilarious moment when the one thing they could agree upon as two stubborn people was that Yvan was a baby. Still, there were times I felt Valdez was less believable. He made large and exciting physical choices, like jumping over a chair, but I also got the sense he could not look the audience in the eye. Valdez’s performance ranged between outlandish and self-conscious. Nevertheless, it was a relief to have a change in energy from Yvan’s relentlessly pretentious friends.

The stark difference in the characters’ energy was reflected in the black and white costumes and sets. Marc and Serge were foils to Yvan—opposites that when taken together created a world of black and white: cold-feeling and high contrast.  As a piece of art, the show had a monochromatic mood because Spadafora and Reza abstained from portraying color, or genuine human connection, on stage.

To be fair, not all dramatic plays have to end with the characters hugging each other and apologizing. There is something refreshing about seeing deeply flawed people on stage who do not change over the course of a 75 minute show. It may be a cynical take or a realistic one, but it is still true. And for all of the characters’ bickering, there were funny moments because it is delightfully easy to make fun of abstract modern art.

Audiences who do not mind a little philosophy will enjoy Art. Anyone who goes should be prepared for strong language and big, intellectual words. All things considered, my comments are nit-picky about a production that was well-done. With just a simple set and small space, three actors told a story that required their craft be as developed as the playwright’s vocabulary. Ultimately, An Other Theater delivered the message of the show well—even artfully.

The An Other Theater Company production of Art plays Fridays and Saturdays at 7:30 PM through October 1 at the Studio Stage in the Covey Center for the Arts (425 West Center Street, Provo). Tickets are $16. For more information, visit anothertheater.org.