ST. GEORGE — They say young love takes people’s feelings from the highest of highs to the lowest of lows, and no story seems to illustrate that more blatantly than the emotional roller coaster of West Side Story. Directed by Tazia Murie, with music direction by Kris Barber and choreography by Rhett Guter, this adaptation of West Side Story serves as a poignant reminder of how far society has come — and how far there is yet to go. It is a message that is both timeless and timely.

A retelling of the classic forbidden love story Romeo and Juliet, the 1950s adaptation by Arthur Laurents, with music and lyrics by Leonard Bernstein and Stephen Sondheim respectively, unfolds in a moving way at the hands of the amateur-yet-skilled St. George Musical Theater cast. Opening on the streets of New York City in the 1950s, two rival gangs, the Puerto Rican “Sharks” and the white American “Jets” clamor for control of their territory — and for the respect they all long to command.

In the realm of live theater, directors often have to choose between casting strong dancers, strong singers or strong actors, seldom having a pool to choose from that truly crosses into the “triple threat” territory. In the case of SGMT’s West Side Story the ensemble definitely held its own in the dance category, while several of the principle roles held vocal prowess at the top of the list. Executing Guter’s masterful choreography, the entire cast managed to be light on its feet and a force to be reckoned with, moving back and forth between the intricate dance sequences and the rough and tumble fighting scenes with ease. Their ability to use the entirety of the small theater-in-the-round stage, without stepping out of bounds and into the audience space was thrilling to see (probably even more so for those closer to the action in the front row seats). 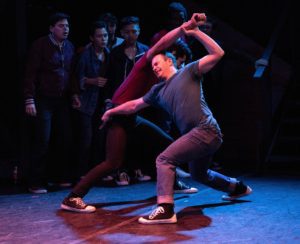 For principle characters, Maria (played by Maria Garner) and Tony (played by Eric Humphries) in particular, vocal strength was clearly the first priority. Garner’s voice soared exquisitely over the crowd in the unforgettable “Somewhere” and “Tonight,” and Humphries painted a beautiful picture of anticipation and adoration in “Maria.”

Providing a voice of reason coupled with compassion, Anita (played by Ellee Anderson) delivers strong in the catchy “America,” where she and her fellow immigrants engage in a verbal tussle about the pros and cons of their old home versus their new. Anderson’s vocals again delivered well as she and Garner sing the heart breaking “A Boy Like That” and “I Have A Love.” However, in light of the recent tumultuous events leading up to this duet, Anderson could go even farther to make the audience feel her grief and her anger to a greater degree.

Throughout the show, the rhythm of the dialogue vacillated between a comfortable, believable conversational speed and a choppy, occasionally rigid delivery of lines. During the opening scenes in particular, as the actors worked to get their feet under them for the night, the timing lagged just enough to be noticeable. However, subsequent scenes moved along at a more comfortable pace, minus a bit of hesitation on the vocal entrances in the rhythmically tricky “Office Krupke” number.

Turning in strong performances as the believable leaders of the rival gangs, Alexander Arnold’s portrayal of Bernardo and Caleb Christensen’s version of Riff were endearing, making for an appropriately emotional culmination of Act 1. Other standout performances came from Anybodys (played by Britnee Rodgers) and Chino (played by Reese Wheeler), along with Doc, originally written as the male owner of the drugstore hangout, but played in this production by a female, Jane Williams. It’s a move that is becoming an all-too-familiar trope in both theatrical and cinematic realms, casting women in roles traditionally held by men. Depending on the show and the role, the argument for whether this is a good idea is up for debate. Williams pulled the role off well, giving the character of Doc a good balance of grizzled toughness, with just the right amount of heart.

Even on a stage as simply adorned as this theater-in-the-round, proper accolades must be paid to the set and costume departments. The dresses in particular added a delightful splash of color, often changing the mood of the scene and certainly directing the focus, such as with Maria’s red dress in the closing sequence.

While one could certainly argue the impractical reality of the details of this love story beginning and ending in less than 48 hours, the message of West Side Story rings clear. As Stephen Sondheim’s hopeful lyrics remind, there is a time and place for love to reach across the self-imposed boundaries of class and race, “Someday, somewhere.”