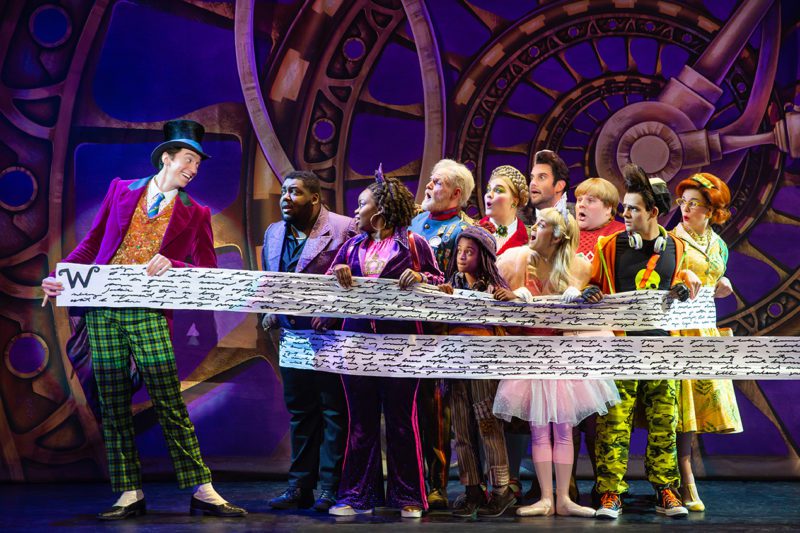 SALT LAKE CITY — “Who can take a sunrise, sprinkle it in dew, cover it in chocolate and a miracle or two? The candy man can!” Who can do the less enviable task of successfully reimagining a beloved Roald Dahl story that has sold 20 million books, produced two iconic films, and another stage musical just 10 years prior? David Grieg, Scott Wittman, and Marc Shaiman do the seemingly impossible with the touring production of Charlie and the Chocolate Factory: A New Musical, which opened for a brief tour at the exquisite Eccles Theater in Salt Lake City on Tuesday night.

Anybody who has seen the movies, read the book, or even seen a local community or school production of the similar but distinctly different Roald Dahl’s Willy Wonka musical will have a strong sense of the main story elements. However, it is important to note that this is not the same musical audiences have seen locally. Like other tellings, in this version Charlie is raised in poverty with his four bedridden grandparents, and their tenuous financial situation is worsening when the world is overtaken with a candy craze because of a contest to tour the wonderful and mysterious chocolate factory of Willy Wonka. This production hits all those same story points with revamped songs, updated themes, and a darker comedic tone — even for a story noted for its macabre humor.

The notable change at the beginning of this story is that Willy Wonka (played by Cody Garcia) has found his own chocolate is becoming more bitter. Willy Wonka has selected Charlie from the very beginning as the person who would be ideally suited to lead chocolate into the future, due to the boy’s guileless disposition and artist’s appreciation of confectionary creativity. Through the rest of the story, this dampens the stakes for Charlie as the audience watches Wonka bemusedly toy with Charlie until the perfect set up leads him to finding the last golden ticket and winning a tour of the factory. 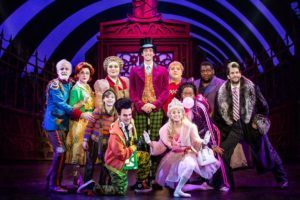 The show was a visual sugar rush, particularly in the second act when the chocolate factory becomes the focus of the show. Much of the tour’s scenery (designed by Christine Peters) was projected and supported with high-level lighting and simple set pieces, which told the story sufficiently and left the rest to the audience’s pure imagination. The most vivid of these rooms had the chocolate waterfall. It was one of the few moments in the play where all of the children and parents were likable and appreciative of Wonka’s genius, which was a nice moment. That changed, though when the jubilant and piggy Augustus Gloop (played by Nic Mains) found himself sucked down into the chocolate river. There was a fun moment when it seemed as though a suction tube carrying Agustus was carried off stage, but it was confusing when Wonka later noted that he may still be stuck in one of the vats of chocolate elsewhere in the factory. 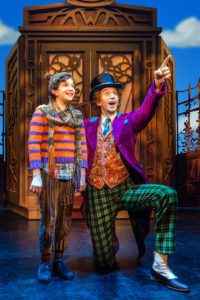 If August had indeed been bodily destroyed, he would have been far from the only child. The selfish, and in this iteration of the story Russian, Veruca Salt (played by the frightfully sweet Angella Palladini) would gracefully pirouette with squirrels just moments before they carried her about and tore a puppet double limb from limb. Similarly, Mr. Beauregarde (played by Branden R. Mangan) had a hilariously morbid response to watching an Oompa Loompa shoot a dart at his inflated daughter Violet (played by Zakiya Baptiste), who then exploded into confetti and streamers all over him. The show seemed to roll into the humor of 21st century Wonka memes and an edgier comedy that played to adults but merited laughs from children in the audience as well.

But Greig’s script sometimes pull at the heartstrings. Claire Leyden (playing Mrs. Bucket) and Steve McCoy (playing Grandpa Joe) have profound and moving relationships with Charlie, which reinforce Charlie as a shining protagonist, despite the seemingly inevitable resolution of the story. Mrs. Bucket sings about what it would be like if Charlie’s father were there, presumably because he died, and brings both an optimistic buoyancy and a mournful gravity the situation. The moment made me pensive about the lavish experience of the show contrasted with real poverty in the greater world just beyond the theater doors. 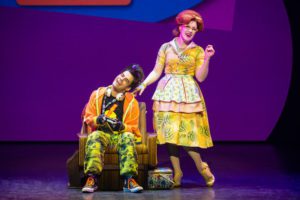 The casting of a show with child leads naturally creates problems when considering the schedules and needs of real children. While most of the children in the play are adults cast as child characters, the tour of Charlie and the Chocolate Factory has three potential Charlies who are all actually children. Tuesday night’s performance featured William Goldsman as the titular character. Goldsman managed to play Charlie at a consistently high emotional level that nicely crescendos through the character’s most emotional moments, such as the crushing discoveries of other children finding golden tickets. This Charlie is obsessed with chocolate, and Goldsman’s understanding of the emotional arc of the character was well developed for a young actor. Goldsman’s foundational skills of articulating, singing, and dancing were impressive for a young actor who shares the part with two other talented youth.

Not to be forgotten is Garcia’s droll Wonka, who had more character development than I had seen in other stage productions of the Wonka narrative. Garcia seems truly burned out on chocolatiering and finds renewed hope in Charlie that culminates in an authentic gift of his factory to Charlie. Garcia does not play Wonka as underhanded or sinister. Instead, he shares Charlies insatiable curiosity and love of chocolate for chocolate’s sake. He was a delight to watch.

Perhaps the most memorable contribution to the show was the incredibly strong ensemble. Watching them perform was a master class in synergy and excellence. They had to perform ballet choreography in stifling and bulky squirrel costumes with full Disneyland character-style heads, intense full body puppetry of the oompa loompas and the ever difficult challenge of authentically playing sugar fueled children swarming for sweets. The ensemble performers moved well and demonstrated what a true Broadway-caliber ensemble looks like.

The climax of the play was a bizarre deviation from other renditions of the story. Often Charlie must grapple with his poor choice to drink a forbidden fizzy lifting drink with Grandpa Joe and then confess to the crime to be deemed honest. This retelling instead abandons that scene entirely and Charlie is only left with the dilemma of whether or not to snoop in Mr. Wonka’s private notebook — which he is expressly forbidden to do by Wonka.

The technical miscues were the spotlight operators who through the first act consistently missed actors. It was clear the actors hit their mark by the other lights hitting them, but often a spotlight would arrive late, low, or not at all on characters such as news reporter Cherry Sunday (played by Nicole Hale).

I loved hearing the laughter of children in a Broadway show retelling a story for youth. However, when the lights dimmed at the end, before bows even happened, swaths of audience members were flooding to the exits and continued to do so even as confused actors took their bows. It was poor theatre etiquette for so many to not stay to the end and thank the performers who had left their considerable all on stage, and is not something I hope to see again in Utah theaters.

But apart from some poor audience etiquette and some poor spotlight operating, Charlie and the Chocolate Factory is a sweet treat. I have rarely enjoyed such a strong piece of theatre for young audiences, and I hope to see it again soon.

The national tour of Charlie and the Chocolate Factory: A New Musical plays Tuesdays through Saturdays at 8 PM, Saturdays at 2 PM, and Sundays at 1 PM and 6:30 PM at the George S. and Dolores Doré Eccles Theater (131 South Main Street, Salt Lake City) through June 22. Tickets are $55-129. For more information, visit saltlakecity.broadway.com or www.charlieontour.com. 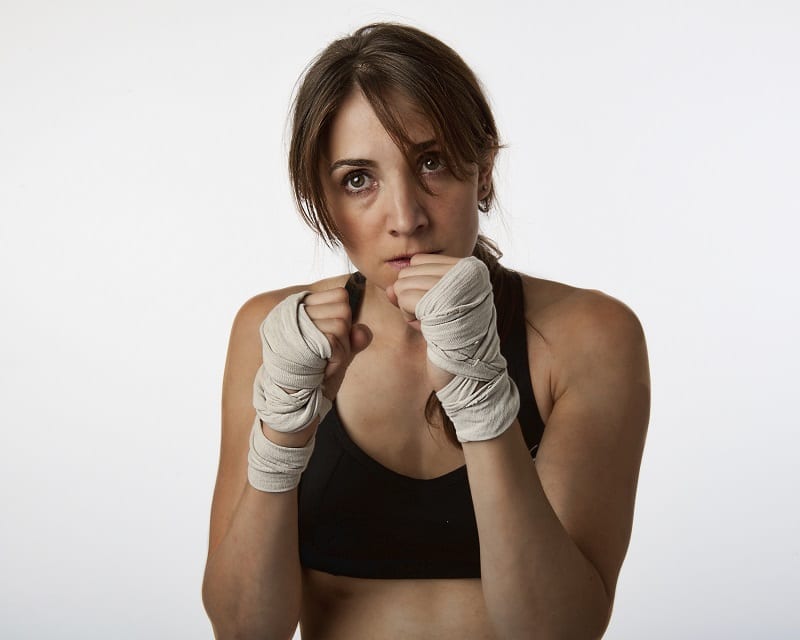