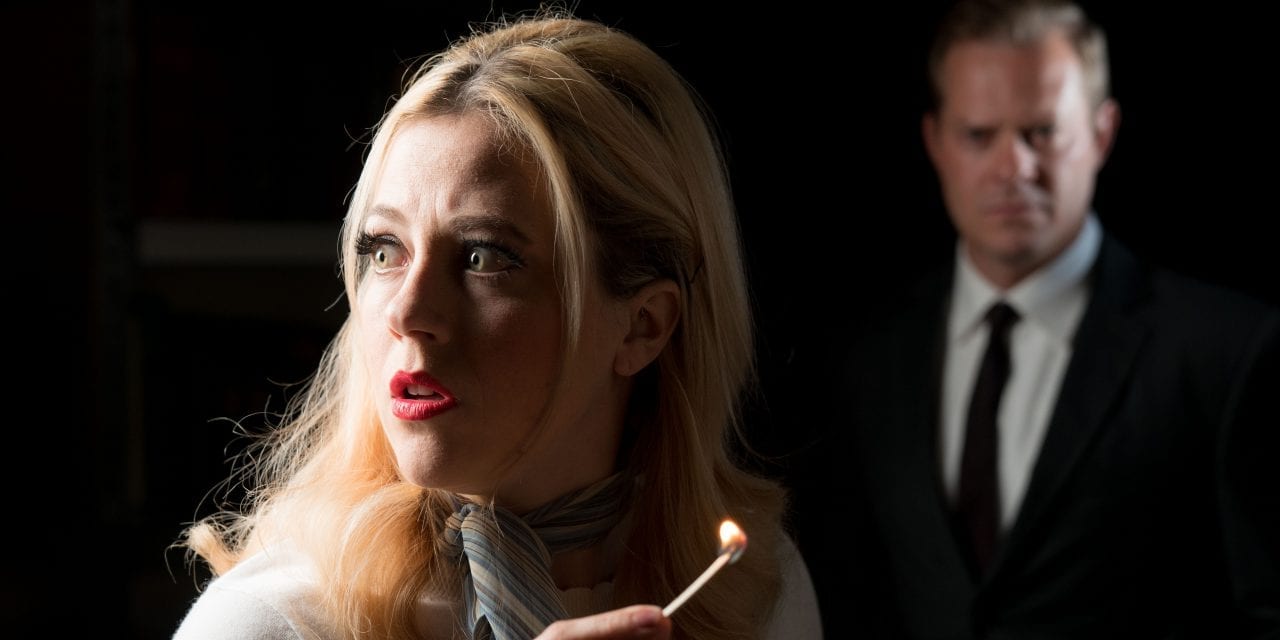 SANDY — Wait Until Dark is a tense thrilling stage play by Frederick Knott. I enjoy both the 1967  film and the play script, and so I had high hopes for the Hale Centre Theatre’s production of Wait Until Dark, directed by Dave Tinney. I found the HTC production to be cleanly executed with some strong on stage talent, but felt the show could have been improved in the finer details.

A young photographer, Sam Hendricks brings home a doll from a woman he met in the airport. She says it is for a little girl in the hospital, but in reality it is filled with heroin. When she comes to claim the doll, it has disappeared. Another criminal, Roat, comes looking for the doll and employs two con men to help him obtain the doll. While Sam is out for the day on business, the men begin their con on Sam’s blind wife, Susy. Soon a life-threatening cat and mouse game is afoot between Susy and the criminals.

Actors know the importance of eye contact, but in for the role of Susy, eye contact could be determental to the integrity of the character. Elise Pearce did well in her portrayal of Susy as a fiesty, fun, and intelligent woman.  I enjoyed the natural feeling chemistry between Susy and her husband, Sam (played by Marshall Madsen). Although Sam isn’t actually home much of the time, the playful banter between him and Susy was fun and sweet, especially as Sam is heading out the door for the day. Sam pushes Susy to be “a champion blind woman” and although it often frustrates Susy, she recognizes how much Sam loves her and wants the best for her. Pearce did well maintaining that relationship, even when Sam was off stage. When Sam returns their relationship has grown, even though he was not physically present. 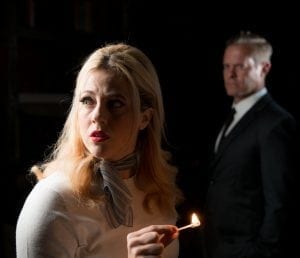 Another impressive actor was Benjamin J. Henderson in his performance as Harry Roat. The character is the worst kind of criminal: calculating, intelligent, and apathetic to the lives of others. Henderson’s casualness in Roat’s responses to the distress of others really brought out Roat’s evilness. By the end of the production, Henderson had thoroughly creeped me out, and that’s exactly how I should have been feeling. The decision to not double cast Roat and only use Henderson is a decision I wholeheartedly agree with.

Tinney created a tense and engrossing climax, but there could have been suspense building throughout the earlier scenes, especially with Act I. The opening scene felt slow and lacked the needed tension. Additionally Mike’s (played by Greg Hansen) and Carlino’s (played by M. Chase Grant) responses to what they found hidden in the closet felt delayed and rehearsed. The scene also felt inconsistent when Roat mentioned that Mike and Carlino have left their fingerprints all over the apartment. He then tells them that they will have time to clean them up  the next day. Carlino was frantically wiping prints, but Mike seemed unconcerned with cleaning up prints, or leaving more for that matter. Perhaps this was to make him feel more genuine in his interactions with Susy, but it also felt inconsistent with a criminal who had been concerned about being involved in the first place.

There were other small details that could have really incorporated to make this production seem more believable, especially with the light design by Danna Barney and sound design by Dan Morgan. The thunder and lightening could have been used to more effectively in this production. At the beginning of a Act II the lightening frequently lit up the sets for the main room and side room, creating a delicious moment in both mood and appearance. Afterwards, though, I was disappointed because the only moments where the storm effects were used was where the scene was supposed to be tense. I would have loved for the storm effects to carry throughout the entire scene, not just to indicate how I was supposed to be feeling during certain moments.

Likewise, the background music was also used only during the most intense scene. Rather than adding to the intensity of the scene, it distracted from the performers. The scene would have been just as strong without the music.

Another inconsistency was at the very end of the show. As the audience was leaving the theatre I noticed a faint blood smear on the refrigerator, but there was no blood anywhere else. Suzy, Mike, and Harry Roat should have had blood on them, especially Harry. Either fully commit to a special effect or don’t do it at all.

Jennifer Stapley Taylor‘s set for the apartment contained a pleasing variety of textures in the wood and brick details, which made this basic set visually appealing. I also enjoyed the classic, homey feel of the set, which also allowed the upper levels of the audience seating to better see the lighting in the back room and made the apartment feel opened up.

Overall, Wait Until Dark was a well rehearsed production with a solid cast. While it was enjoyable, there were some minor details that could have pushed this production to its full level of suspense. Still, it is the perfect show for taking a date and cuddling close during the scary moments.

Wait Until Dark plays Mondays through Saturdays at 7:30 PM and Saturdays at 12:3  and 4 PM through November 17 at the Hale Centre Theatre (9900 South Monroe Street, Sandy). Tickets are $18-44. For more information, visit www.hct.org. 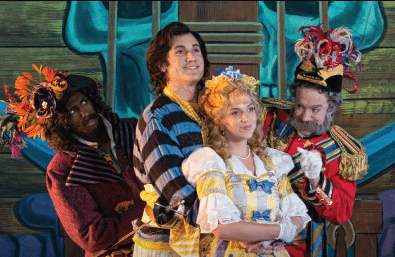 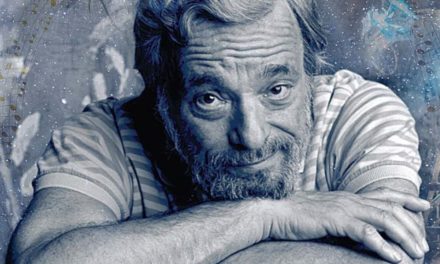