CENTERVILLE — It’s a Wonderful Life stepped onto the scene in 1946 as a film based on a booklet called the greatest gift, and has been a part of Christmas celebrations ever since. It’s a Wonderful Life: A Live Radio Play, was first published in 2006 as a new take on the beloved classic. Written by Joe Landry, the show takes the audience inside a radio studio in New York City to see just how radio shows back in the day were brought to life before the days of television, movie, instant streaming, and TikTok took over. 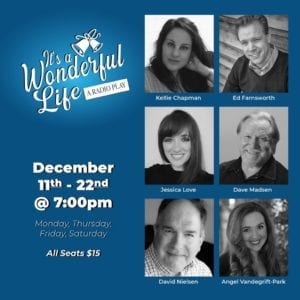 Director and Lighting and Sound Designer Derek Walden has done an excellent job recreating a sound studio that brings back a time that knows no cell phones and also knows no COVID-19. However, CenterPoint is still careful to keep the audience safe. In their smaller Leishman performance hall, every other row was actually collapsed to ensure adequate distancing between audience members. The cast was spaced between radio microphones to ensure the six feet apart, and because this show was designed to be acted as a show through radio, distance is not an issue that cuts away from aesthetic, so the selection was sublime for this year.

1940s and 50s costuming for women, let me just say, was the epitome of flattering for every figure. Costume supervisor Tammis Boam has done a fabulous job yet again of outfitting all of the players in perfect attire; however, the three women look especially fantastic in their Christmas dresses, and even though they vary in size and shape, they all were glowing in the costumes chosen.

One of my favorite elements in the play was Kellie Chapman as the Foley Artist. When considering the art of radio, one rarely stops to think of the sound effects that make or break a production. If sound is all there is, then the sounds that are being brought out are vital to the life force of the show. Chapman was stellar in this role. Of course, because this show was live, the audience gets the added benefit of sight, and Chapman was skilled with hilarious facial expressions that coupled with the sound effects perfectly to provide an amiable time for the audience. From reminding the audience when to applaud, to helping the audience know when to be happy or sad, Chapman was the heartbeat of the show.

Of course, the main story of the show is how George Bailey, tonight voiced by Ed Farnsworth, has reached a point in his life after years of stress and self sacrifice, where he wonders if he has made any difference at all. Upon deciding he is worth more dead than alive (after a little mean-spirited prompting from the town villain, Mr. Potter, voiced by David Madsen) George Bailey is blessed to have an angel, Clarence, voiced by David Nielsen, cross his path to show George just how wonderful his life has been. Rounding out the show are Bailey’s wife, Mary, voiced by Angel Vandegrift-Park, and good friend Violet, voiced by Jessica Love. As with most radio shows, each of these players also voice many other characters. It is truly a spectacular feat to hear a person immediately change their tone and to see their demeanor change when they inhabit a new character. I was especially surprised to see Madsen change from mean Mr. Potter to a young Bailey child without missing a beat.

I would find it impossible to count the number of times that I have heard the story of George Bailey. However, on this particular evening when I put on my mask and armed myself with hand sanitizer to go sit in the safe corner that CenterPoint had promised me, I dragged my theatre-loving 14-year-old along with me. I was not sure how she would take it, because she loves the musical genre more and is at a stage in life where the touching show of the older generation may not be most suited to her. But Director Walden and team have truly conveyed the message of the show to the audience and have built up the story as it is meant to be told, because as we climbed in the car, before she said anything to me, she got on her phone, called her friends, explained the plot to them, then said, “So you see, we really do matter to each other and our families. I never really thought about the difference we all make. It made me almost shed a tear. You should watch this movie. Thank you for all you do. Thank your families. Thank you for being a part of my life.”

Thank you, CenterPoint, for touching a 14-year-old’s heart. Thank you, George Bailey, for sharing your Wonderful Life.

It’s a Wonderful Life: A Live Radio Play plays at CenterPoint Legacy Theatre on Mondays, Thursdays, Fridays, and Saturdays at 7 PM through December 22, 2020. Tickets are $15. For more information, please visit their website.