CENTERVILLE — It isn’t the Christmas Theatre Season until you see A Christmas Carol. I almost thought this year would be the year that I would not see a production until I got the invite from CenterPoint for what they termed a scaled down production of the Christmas Carol with music by Alan Menken, lyrics by Lynn Ahrens, and book by Mike Ockrent and Ahrens. I was thrilled, because I have heard so many great things about this adaptation, but I have never had the opportunity to see it staged, so even a scaled down version was well worth the masking and travel to Centerville. 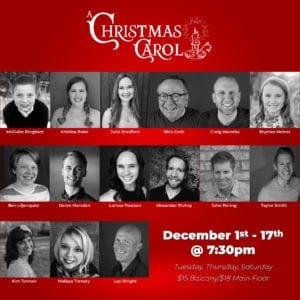 Director Shelby Ferrin and Music Director Brittney Ann Mosher had the daunting task of taking a show with 60 roles and using only 15 players  to maintain safety for the cast and crew, while still providing the tale of Scrooge as he is reminded of the importance of charity and humanity and while still filling out the rich melodies that Menken wrote. I was a little skeptical about the ability of the small cast to pull off the production, but I was pleased with the results. By the end, I shed a few tears at the familiar ending of Scrooge, played by Nick Cash, as he found his Christmas cheer and as he spread some of the wealth he had accrued throughout his life amongst those in his circle that truly needed it.

And that Christmas Eve Ball is what is worth mentioning next, with the festive and fun choreography by Bailee DeYoung. As live theatre has slowly returned, it has been an intriguing thing to watch the evolution of staging and choreography. CenterPoint has been great about having actors in face shields and maintaining distance when at all possible, and as a critic I have wondered about the effect this might have on storytelling, especially regarding dance and movement. During the great ballroom scene of Christmas Eve, pronounced movements being slightly further apart actually made for a more enjoyable view of the players and their skill. With the ghost of Christmas yet to come, played by Julia Loveland-Bradford, the combination of dancing and costume with a haunting black facemask actually added to the character and aided plot.

Mosher has excelled in the job of making 15 voices sound like far more, even when blocked by face shields. The music Mosher is working with is exquisite and ranges from jolly and jovial to haunting and heart wrenching. I am not sure how long the original production is, but the CenterPoint production has been scaled down to one hour in length, and the cuts to the music have been well thought out. The show still feels like it has a cohesive storyline and complete musicality to it. Ferrin and Mosher have obviously worked well together to build a beautiful experience for the audience.

CenterPoint has been good to remind the audience to wear masks; there are hand sanitizing stations and spacing between groups in seating. It appears that the audience is at about 50% capacity. The program has been digitized to also limit spread of germs. To aid the safety of the audience, the audience is advised to leave right after the show is finished.

It is difficult to call out just one player when they played so many different roles, but it is sufficient to say that each of the 15 players, from Tiny Tim played by McGuire Bingham, to Mrs. Cratchit played by Melissa Trenery, the full cast was a delight to watch and hear. The energy was full from start to finish, the harmonies and steps were on point, and the tech design by Derek Walden helped to keep up the pace.

This year, it has been repeatedly said that it has been hard. Every year at this time, the story of Ebeneezer Scrooge is retold. One of his famous lines before his reformation is, “if he is to die, he should do it, and decrease the surplus population.” As Cash uttered that line this year, that hit me a little harder, and I took a breath under my mask. I am grateful I was able to safely attend this production, but I was sad for those whose lives have been lost this year. The production had a lot of foreshadowing in the first song, which is apropos, because Dickens has a lot of foreshadowing in all of his stories and, in turn, still foreshadows much of our lives. In this holiday season, as Tiny Tim has said since first published in 1843 and will say every year in Christmas yet to come, truly, may God Bless Us, Everyone.

A Christmas Carol plays at the CenterPoint Legacy Theatre (525 N 400 W, Centerville) through December 19, 2020, Tuesdays, Thursdays, and Saturdays at 7:30 PM. Tickets are $15-$18. For more information, please visit their website.