SALT LAKE CITY — Ready, Steady, Yeti, Go! Man, what a title! In preparation to see this production (directed by Tristan B. Johnson) at Wasatch Theatre Company I discovered that the play explored a junior high romance in the aftermath of a hate crime. Therefore, I brought my junior high critic with me to offer some junior high expertise in dramatic observation. 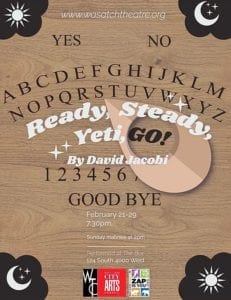 Written by David Jacobi, the play follows young Goon (played by Michael Davies) as he becomes friends with Carly (played by Trinidad Allred), who is the only black girl in school. The cast consists of only five characters, along with Trinidad and Michael, there is Katie (played by Savannah Moffat), Gandry (played by Sterling Shane Allen), and Barry (played by TJ Hunter). The production represents the junior high students retelling this story as each remembers it.

Johnson, who also designed the set and props, had a minimal but effective visual style for this production. One thing that I found impressive is the story is based upon the reactions of a mostly white town when the one black family’s home is tagged with a racial slur. Because of the limited set, the choice to show the tagging in red made the graffiti stand out and have a poignant and profound impact. As one of the few changes in a minimal set, the tag was a reminder that this is the focal point of the story. As each scene changed, the players would state Ready, Steady, Yeti, Go! as a means of jumping from one scene to another, perhaps a sort of code that did not seem to have any other meaning except to them. 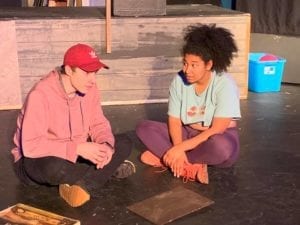 Allred as Carly was fascinating handling this delicate subject matter. As a critic who must often acknowledge my own privilege in both race and economics, the concept of being the only person of my race in my neighborhood is not one I can understand.  However, as a mother of biracial children, the experience of being different is something I have watched through the eyes of my daughters. I appreciated that my daughter could see Allred demonstrate Carly’s bravery in this situation. The cast and director held a discussion after the play and, even among the audience and players, it was intriguing to see that those who have not experienced being a minority in a community cannot fathom the frequency of racism and reminders of being different that Carly and others like her experience regularly. Jacobi’s script expresses that experience powerfully and realistically.

Davies and Allen played thought-provoking roles, and both dealt well with some plot twists that left me thinking and gave me strong discussion points for my 13-year-old after the play. Davies played well the goofy kid who is always getting into trouble, but will eventually draw a line in the sand. Allen was convincing as the intelligent kid who never messes up until it really counts. Moffat had some of the real challenges of playing several different parts, including the adults who have had years to master the subtle racism that is echoed so well in Rodgers and Hammerstien‘s “You’ve Got To Be Carefully Taught,” and so well played out in a dinner scene with Moffat, Davies, and Allen. Hunter also plays several roles well, slipping in and out of lisps and body movements as if he were two different people.

The best scene of the show is where Allred snaps and says what just about anyone who has had enough of putting on a fake smile and pretending that everything is OK when it really is not. In this moment, Allred embodies every woman who has been insulted in front of a group of men, every immigrant who has to deal with stereotypes about their group, and every person who has had to keep their mouth shut after hearing racist, sexist, or demeaning comments in order to keep their job. Allred’s acting skills and strength and power in that moment were breathtaking, and the scene was freeing and cathartic in so many ways.

Ready, Steady, Yeti, Go! is important and timely. It can be uncomfortable see yourself in some of the characters that are act in demeaning or hurtful ways. But this is a story that everyone should spend the time seeing because stories like this will help each person change and create a better society.