Note: The March 13 through March 30 performances of Oliver! have been cancelled due to the coronavirus.

OGDEN — Charles Dickens’s classic novel Oliver Twist, adapted into the musical Oliver! with music and lyrics by Lionel Bart, follows the story of an unfortunate orphan in London who struggles in the poor workhouse, the streets of London, and tries to find parental love in the difficulties of the town. Directors Breanne and Derek Hendricks have not eschewed the darker, more difficult parts of the story in their adaptation of this production at Terrace Plaza. 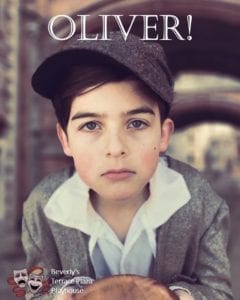 In the role of Oliver, Owen Talbot has a sweet voice and endearing presence, which is essential to the telling of this tale.  Talbot was a perfect choice for the role because of his ability to sing the touching “Where is Love?” without overdoing it. Talbot is also capable of putting on the charm in the later songs such as “I’d Do Anything.” Talbot performed well when sharing the stage with other actors, such as Brogan Wright (masterfully portraying the Artful Dodger) and Lindy Combe (as Nancy).  Lindy Combe’s performance was perhaps one of the best of the night, especially considering how she handled one of the shows most tricky songs, “As Long as He Needs Me.” Coming at a difficult moment of storytelling, the song about an abusive relationship with the structure and feel of a romantic ballad was thoughtful and sensitive, thanks to Lindy Combe’s acting choices and the Hendrickses’ direction. The song ended up as a moment of beautiful reflection and haunting pain.

Speaking of abuse, Blake Peterson as Bill Sykes enters with the song “My Name” in a frightening way that spooked me unexpectedly, and Peterson’s menacing presence was a bit difficult to shake.  The added effect of the well-behaved but massive Nikita as the dog Bullseye accompanying him showed that Sykes was not someone to be messed with. My favorite touch, however, was the lighting designs by Miland Palmer and Mark Ellis, who created cues that contributed to the menacing mood when Bill Sykes was on stage. An interesting contrast to Sykes is Fagin (played by Michael Combe) who is the leader of the gang Oliver falls in with.  Fagin is also meant to be seen as somewhat of a villainous character, but with hints of conflict and good. I truly appreciated Michael Combe’s interpretation of this conflict in “Reviewing the Situation.” Finally, a pivotal moment of the show that I performed so well before was in the reprise of “It’s a Fine Life” where Nancy, Bill, and Sykes all let their emotions show and the actors truly show what they have invested in the story.

In a show like Oliver!, one of the substantial challenges is to help a cast of younger children understand the importance of performing accurately in music, dancing, and acting.  I was impressed from the very beginning with the chorus of children. The opening number of the well known song “Food, Glorious Food” had strong musicality under the direction of Holly Lowell, and many of the songs were a delight to watch, especially the choreography of the second act opener “Oom-Pah-Pah.” Choreographers Ginny Spencer, Jamie Talbot, and Alyn Bone were capable of working with a cast of a vast span of ages and keep them well in sync.

In many Terrace productions, I have found that while the sense of community is fantastic and I love the inclusion it brings, sometimes the stage feels a bit crowded and overwhelming.  However, with Oliver!, the size of the cast was absolutely perfect for the size and scope of the show. I was impressed with the choices of staging and spacing and also the volume that the chorus could produce seeing that they were not quite as large as some of the former casts I have seen.

The costumes are one of the consistent gems of Terrace Plaza, and in Oliver! one of my favorites for Mrs. Sowerberry (played by Penny Crawford). From the head (with perfect boots) to to (her superb hair piece), it was apparent that designers Becky Montgomer, Jim Tatton, and Stephanie Petersen had a strong understanding of the Dickensian time period and the overall feeling of the show.  I also enjoyed the contrast of the overly frivolity of the costume of Mrs. Corney (played by Carla Zarate) compared to the simplicity of Oliver’s own costume.

Oliver! has never been a favorite show of mine, but this production struck the right balance between showing the London underbelly and providing a fun and enjoyable splash of entertainment.  While not perfect a perfect production, I do love the inclusion at the heart of community-based theatre, and that is a strength of this production. I am glad that there are companies like Terrace Plaza that allow local performers to develop talents and build friendships, and I commend directors that let that happen.

Full disclosure: Unbeknownst to our reviewer, a family member was one of the choreographers, Alyn Bone, who consulted on the songs “I’d Do Anything” and “Consider Yourself.” Reviewing the work of a close family member is normally a violation of UTBA’s conflict of interest policy. The reviewer informed the UTBA president of this situation as soon as she was aware, and the editing process was supervised to ensure that the family member’s work was not a focus of the review. Honest feedback is always encouraged at UTBA.