SALT LAKE CITY — Although The Post Office (written by Melissa Leilani Larson and adapted from a story by Rabindranath Tagore) features a cast of high school students, the actors were every bit as professional as many other casts that I have reviewed. Under the direction of Adam Wilkins, this young group of actors handled the serious subject matter well and brought to light a good balance of humor and hope mixed adversity. The Post Office tells the story of Ash, a sickly girl who remains hopeful in the face of the growing adversity caused by her illness.

I especially enjoyed the performance of Ash, played by Alexis Bitner, who was excellent at helping helping others finding joy. Bitner excelled at having a wisdom beyond her years, in spite of Ash’s lack of education. I enjoyed the relationship between Ash and her aunt Maddox (played by Elaia Echeverria). Even though the actresses were close in age, they created a believable relationship between that of aunt and niece.

I also appreciated interactions between Ash and the other characters she came into contact with, especially Badger (played by Carter Wagstaff). Badger brought humor and joy into Ash’s life at a critical time. And because Andrew Pankey played Sheriff well, I despised his character because of the way that he treated Ash, who is obviously an invalid and a young girl. Indeed, Sheriff was a downright jerk.

But my favorite vignette was between Ash and the Cheese Seller (played by Melainey Isaac). The Cheese Seller was a woman who was unhappy after some setbacks in life, but after meeting Ash, she realized just how fortunate she was. It was a beautiful little moment. 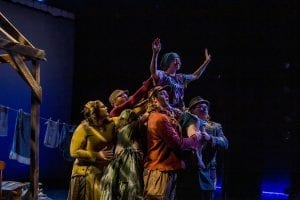 I was pleased with Wilkins’s use of pantomime in this production for the scenes along the river. There is also good use of freezing on stage while other little scenes were playing, such as the scene between Ash and the Stranger (played by Sarah D’Anella). Wilkins keeps the show interesting and well structured, and never makes the small space feel too confining.

The technical elements of this production were another positive aspect, particularly the set and costume designs. The set (design by Madeline Ashton) was a basic wooden frame for a one-room home. However, the props and set dressings found within that basic wooden frame made the unit set interesting to look at throughout the entire production. The costumes by Maddiey Howell-Wilkins were fun, as they were made up of bits and bobs of other things. Ash‘s costume was a bunch of patches from different pieces of fabric, which added color and interest to appearance. The Cheese Seller’s yellow skirt was made of ties, while the Sheriff’s jacket was covered in safety pins on the lapel and pocket flaps. Sage’s costume was a tunic-like dress made out of scarves. The queen’s doctor had an intriguing outfit with a jacket made of an old pair of trousers and covered in golden safety pins, and the bell ringing solider had a vest made entirely out of belts. These pieced-together costumes helped to establish the fact that The Post Office was sent during wartime and people were using what they had, but it also made for an interesting texture in the technical design.

The Post Office is a moving, heartfelt show that is well worth the audience’s time and money. It gives audience members a chance to not only support area high school students as they demonstrate great talent, but also to financially support a charity in Africa that supports refugee education in Kenya. The Post Office is a lovely piece that made me grateful for the life I have and the opportunities that I have to explore the world. I highly recommend this 55-minute production to anyone.