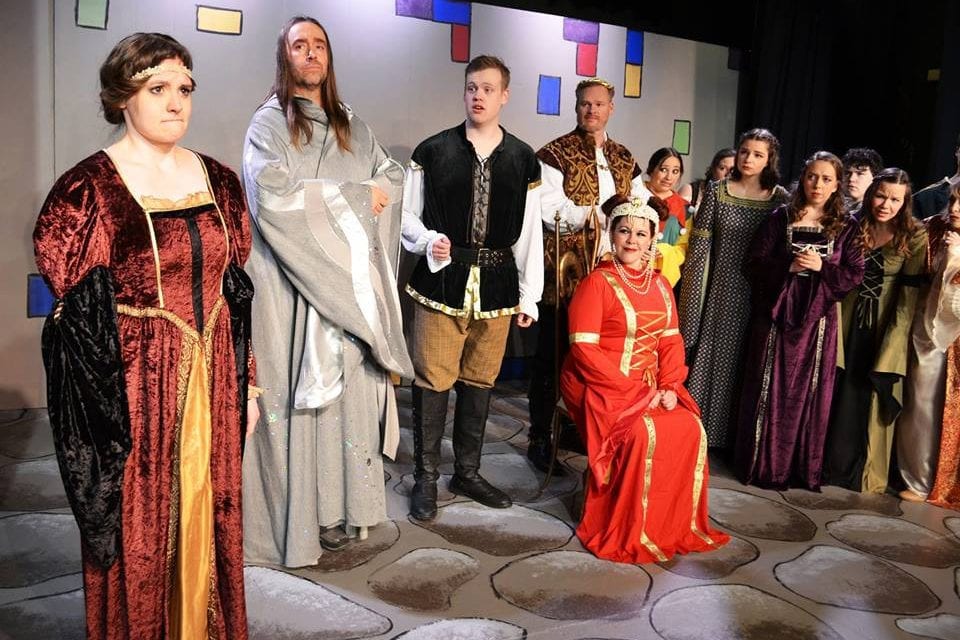 PERRY — Most nights at around 7:30 I can be found reading a bedtime story to my children. However, this weekend, I made an exception. We made a later bedtime for them and went for a night out to see Heritage Theatre’s production of Once Upon a Mattress, music by Mary Rodgers and lyrics by Marshall Barer. It was certainly a night that will not be forgotten soon. I have read at least five different versions of Barer, Jay Thompson, Dean Fuller‘s book, The Princess and the Pea, to my kids, so they are familiar with the story that the play is based on. The opening number, “Many Moons Ago,” has the story sung out by Minstrel in almost a bedtime story fashion. Minstrel is traditionally a male role, but Director Meg Clawson is obviously comfortable bucking tradition and cast several roles against type. Changing parts written for a tenor into a soprano range might prove challenging for some productions, but it is handled masterfully by this cast. Thus, the show opens with a female Minstrel, played by Abby Payne-Peterson, who astounds with her beautiful voice and large vocal range.

Minstrel tells the audience that the story we think we know of the Princess who must pass the strange test of feeling a pea through twenty mattresses is not the whole story. Set in medieval Europe, this tale has all the familiar archetypes any child could hope for in a bedtime story, including the overbearing Queen Aggravain played by Amber Kacherian, who could have gone farther to embrace the conniving nature of the character. Cast of Heritage Community Theatre’s Once Upon a Mattress.

King Sextimus the Silent is under a curse that keeps him from speaking until, “the mouse devours the hawk.” Sextimus is played by Tad Wilson, who has an excellent command of nonverbal communication. Wilson tells much of the story without uttering a word and is a stand out in his command of physical comedy.

The royal family is rounded out by an emasculated prince who has been raised to be a complete mamma’s boy. In a funny happenstance, Prince Dauntless is played by Caderik Wilson, who is Tad Wilson’s actual son. Knowing that these actors are father and son in real life made the song, “Man to Man Talk,” even more hilarious. I was laughing out loud as the King tries to mime a birds-and-the-bees talk to his grown son.

Trying to enter this dysfunctional royal family is Princess Winnifred from a far-off swamp kingdom. Winnifred, portrayed by Rebecca Genther, is a strong and brash girl who knows what she wants and is willing to fight for it. Winnifred, known as Fred to her friends, claims to be shy while acting to the complete contrary. Genther has a strong voice and delivers a solid performance. Some of her dancing is awkward, but she exudes a confidence that makes the audience fall for her, just as Prince Dauntless falls for Fred.

All of the characters of the ensemble are rooting for Princess Fred to be able to marry her Prince, because the Queen made a royal decree that no one in the kingdom can be married until the Prince has found his wife. This is a big problem for Lady Larken, who lets Sir Harry know that there is a strict time frame for things to work out because she is pregnant. Sir Harry is played by Jordan Martineau, who is also the Music Director for the show. Martineau has an excellent tenor voice and good chemistry with Sarah Johnson, who plays Lady Larken.

Of course, no medieval court would be complete without a court jester. Jester is another normally male role but is played by actress Nicole Atkinson. Atkinson does an exceptional job in a role which requires singing, dancing, and comedy. I particularly enjoyed the harmony of Atkinson and Payne-Peterson in the trio, “The Minstrel, the Jester, and I.” Their voices blended together beautifully and complemented the humorous performance of Tad Wilson, who must mime his third of the song.

This production really emulates what community theatre is all about. The building was originally constructed in 1899 as a Church of Jesus Christ of Latter-day Saints meetinghouse and has undergone many renovations in its long history to transform it into the charming home for the Heritage Community Theatre. Director Meg Clawson wears many hats, as is common in community theatre. Aside from directing, she also designed the set and the costumes with the help of the Centerpoint Legacy Theatre. The set is simple and utilitarian, and the costumes set the scene nicely. However, theatre like this is not about spectacle. Truthfully, a few of the dance numbers like, “Shy,” and, “Very Soft Shoes,” are a little rough on precision. Despite being a little humble in these areas of spectacle, the production is fantastic.

What I most enjoy about the story is the growth that each of the characters must make over the course of the show and the excellent job the actors do in portraying that growth. Once Upon a Mattress was first produced in 1959 and is still as enjoyable today as when it first premiered. It is such an enduring show because it has all the elements of a good bedtime story. Each character has a journey through trials, but everything ends happily ever after. The actors connect to each other well and keep the pace of the show moving briskly. I am very impressed with the voices of all the actors. As a fast-paced musical, it demands a lot of singing through a large range. The actors are all strong and not overpowered by the sound system accompaniment. The technical team does a good job balancing out the mics to the space.

Small theatres like the Heritage Theatre are only kept alive through ticket sales, volunteer hours, and donations. Though their budget is small, the value of this kind of theatre in a community is great. The Heritage Theatre does community outreach by taking performances to schools and inviting disadvantaged groups to attend preview performances for free. Heritage Theatre is a vital part of the community, and I hope people will come out and support this production full of talented singers. This play is perfect for families to attend together. My daughter thought it was one of the best nights of her life. She laughed all night long as the beloved bedtime tale expanded into a night full of song and dance. The energy of the cast was infectious, and I could tell that they were performing out of love for the craft. While the cast kept my focus riveted throughout the show, during the scene breaks, I would look at my daughter and see the joy on her face. That look of delight on my own princess is precious; I hope others will have the same experience with a great night out at the theatre.

Go to the woods for Farmington’s INTO THE WOODS