PROVO — In the midst of the grey Utah February days, BYU has a production of The Comedy of Errors that aims to take away the winter blues. This production for young audiences takes Shakespeare to the beach to party down with Dromio, Antipholus, Adriana, and the rest of the gang in Ephesus.

Based on a Roman play, The Comedy of Errors is Shakespeare’s only pure farce. In the play, two pairs of twins who were separated in infancy accidentally reunite. Both pairs consist of a master and servant named Antipholus and Dromio, one set of which lives in Ephesus, and the other in Syracuse. When the twins from Syracuse arrive in Ephesus, the natives mistake them for the Ephesian Antipholus and Dromio, which leads to many comic misunderstandings.

Already Shakespeare’s shortest play, the BYU Young Company has cut this production to 50 minutes (not including pre-show activities). As a result, the script consists entirely of the mechanics of the plot. A Shakespeare purist will be disappointed that the touching family reunion at the end of the play is rushed, but kids won’t mind because the play is full of silliness that they can enjoy. 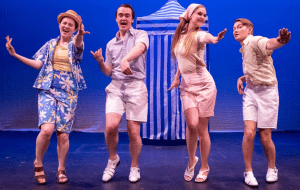 Director Kris Jennings added a great deal of comical stage business (such as using a life preserver to capture Antipholus of Ephesus, or having Antipholus of Syracuse talk to a plastic fish), which helped her cast focus on getting laughs from the audience. Jennings was also careful to allow the laughs to crescendo so that the climax of the play, when everyone first sees both sets of twins on stage at the same time, was also the funniest moment of the show. Indeed, the scene was a great payoff for making it through Shakespeare’s careful (almost mechanical) plotting.

The strongest member of the cast was Caleb Andrus in the role of Antipholus of Syracuse, whose energy and charisma made every one of his scenes enjoyable. Whether Antipholus of Syracuse is flirting with Luciana or is being chased by a courtesan, Andrus holds nothing back in trying to create a loony performance. Two other standouts were Jeanelle Long as Adriana and Samantha Daynes as Luciana. Both women were great foils for the male leads, and their frustration at the wrong Antipholus or Dromio was a consistent source of humor. 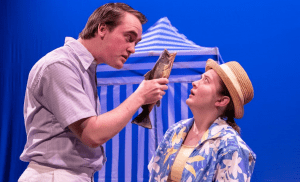 Caleb Andrus as Antipholus of Syracuse and Heidi Wilding as Dromio of Ephesus.

Stephen Coley as Antipholus of Ephesus could not match the zaniness of Andrus, but still had a pleasant performance, especially when he writhed on the floor in the life preserver. However, Andrus and Coley look nothing like one another, and I was disappointed that the hair and makeup team didn’t at least have the two dye and style their hair to be identical. The two Dromios had the same problem; Heidi Wilding in the role of Dromio of Ephesus clearly looked and sounded like a woman, and it just wasn’t plausible that anyone would confuse her with Jasper Raines as Dromio of Syracuse. But kids won’t care, and neither will many adults. If anything, the physical differences in the actors playing the twins made it easier to follow the story and understand when the mistaken identities came into play.

The only truly weak link in the cast was Robert Moore, who played four characters (Aegeon, a merchant, officer, and Nell) in the exact same fashion. Moore spoke too quickly and quietly for me to understand most of his lines, and he played all four characters with the same flat level of emotion.

Nat Reed‘s set design is probably my favorite that I have ever seen for BYU’s Young Company. These sets have to be portable, because the productions must tour local elementary schools for most of the show’s run. Reed created three beach tents and other staples of beach life that perfectly conveyed the beach setting of the production. Hannah Liberatore’s costumes had an early 1960’s feel that complemented the set and gave the play a feeling of escapist entertainment.

The merry mix-ups of The Comedy of Errors have entertained audiences for over 400 years, and even an abbreviated production with just a cast of nine actors can make the show work today. Though many ages can enjoy the show, I think it is best suited for kids in the third through sixth grades who want to see how funny Shakespeare can be.

The BYU Young Company production of The Comedy of Errors plays Wednesdays through Saturdays at 7 PM and Saturdays at 2 PM and 4 PM through February 16 in the Nelke Theatre in the Harris Fine Arts Center on the campus of Brigham Young University. Tickets are $6-8. For more information, visit the BYU Arts website.