OGDEN — Rarely is there an opportunity to see a new show during the Halloween season, so I had a great deal of excitement to attend Curtains, a musical mystery comedy with a book by Rupert Holmes and music and lyrics by the famous duo John Kander and Fred Ebb, at Terrace Plaza Playhouse in Ogden. Curtains, directed by Breanne and W. Derek Hendricks, is a 2007 Broadway musical that tells the story of a murder of a star backstage before opening night, and the subsequent investigation of who might have done this crime.  Because the star of the fictional play within the play, Robbin’ Hood, was rather untalented and unpopular, it is a classic whodunnit that has a number of possible suspects and motives. Despite my general tendency to be good at solving mysteries, I found the surprise ending of Curtains to be an absolute surprise. 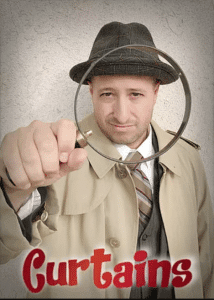 The show unfolds with the writers of Robbin’ Hood, Georgia Hendricks (played by Megan Cash) and Aaron Fox (played by Brady Cash), and producers, Carmen Bernstein (played by Lindy Page) and Christopher Belling (played by Nick Cash), all singing and lamenting the poor reviews received by overly critical critics. As they sang the fun song “What Kind of Man?,” their harmonies were perfect, thanks to the music direction by Holly Lowell. Likewise, their costumes (designed by Stephanie Petersen, Jim Tatton, and Jamila Lowe) were ideal, despite the challenge that most productions that represent a show within a show have: representing different time periods well, and also providing distinction between both elements of on stage and backstage.  The costuming team made the distinction nicely, with a strong western feel for the stage production and a classy 1950’s elegance for backstage. Sound and lighting designed by DD Lynch and Don Wilhelm, respectively, also added to the ambiance of the production, especially when the show delved into the fun murder mystery.

Page was phenomenal as Carmen Bernstein, really stealing the stage whenever she stepped on it, due to her charisma and exciting performance. Megan Cash as Georgia Hendricks was similarly spectacular, with a beautiful voice (in songs like “Thinking of Him”) and a good balance between humility and confidence. 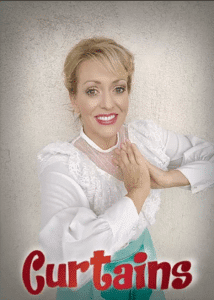 Choreography by Ginny Spencer was inconsistent in this production.  Some of the dance numbers, such as the aforementioned “What Kind of Man?” and the “Finale” were well executed and fantastic.  Others, such as the opening number “Wide Open Spaces” and “Kansasland” were a little messy and chaotic. While the leads seemed to be strong dancers throughout the production, the chorus was chaotic in movement. On the other hand, the ensemble was vocally strong and could sing the score well.

Lt Frank Cioffi (played by Brett Johnson) was another standout role in the production.  As a police officer who is somewhat of an amateur theatre enthusiast, Cioffi excitedly investigates the murder, as well as become part of Robbin’ Hood in order to improve production.  The song “Show People” was indeed a highlight of the evening. The song’s appropriateness was not lost on me, as at a theatre like Terrace, the majority of players likely do have a very different day job. The actors were on stage singing how everyone from your dentist to your cleaning lady really wishes they had a chance to be on stage, and the song hit home.

One of the most difficult parts of this production was, sadly, the audience.  The script is full of a lot of tongue-in-cheek dry humor and intricate sarcasm that the audience didn’t react to.  I found it sad that most of the cast was putting their heart and soul into this production only to be met with a lackluster response. Much of the time it felt that I was the only one laughing in the venue, and I know the jokes were stronger than the audience was giving credit.  While this production of Curtains had some ups and downs, I found it a rather enjoyable show that I have never seen in Utah before. I was glad to see something fresh and new on the Terrace stage, and felt like it was an appropriate love letter to musical theatre, mystery, adventure, and intrigue.

Dr. Maren Scriven Swensen is a counselor by profession, therapist, and multicultural professor. She is the mother of two fabulous daughters and stepmother to 4 fantastic children. She also has a love and passion for theatre that goes back decades, including a minor in theatre. Maren is a member of the American Theatre Critics Association.