IVINS — Much like a game of chess, Kayenta Center for the Arts’ production of Chess The Musical proved to be an evening of intricately woven plots, complex moves, and layered meanings. But unlike the game, this complicated story offered a far more nuanced conclusion. Nothing like a simple declaration of “checkmate” one might anticipate. 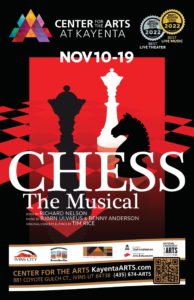 Filled with intrigue, infidelity, espionage, love, and impressive music, Chess The Musical brings the realities of Cold War tensions to life on stage under the direction of Edwina Jones. With music and lyrics by Benny Anderson, Bjorn Ulvaeus (of the pop group ABBA), Tim Rice, and Richard Nelson, this rock opera paints a fascinating picture of American and Soviet relations during the 1980s.

Set in the intimate proscenium theater space at Kayenta Center for the Arts, the black and white squares of the chessboard serve as the inspiration behind a set design that is simple yet intriguing. It is also a stark contrast to the ins and outs of the plot that showcases relationships and decisions that are anything but black and white.

Taking center stage in what can only be described as the Queen role, Mimi Knell’s portrayal of Florence—second to the American grandmaster Freddie Trumper and love interest of Anatoly Siergievsky, the Soviet chess king—was an extraordinary lesson in vocal prowess and acting skill. From her heart-breaking duet, “I Know Him So Well,” with Mikalene Ipson (playing the role of Svetlana) to her reprise of the stirring, “Anthem,” Mimi Knell carried herself with ease and grace, leaving the audience to revel in her vulnerability and evident passion for her craft.

Joining Mimi Knell on stage and matching her skill for skill is Greg Knell, who plays the Russian chess player Anatoly Siergievsky, lover to Florence. Greg Knell’s voice filled the space in the poignant, “Anthem,” and several other numbers in a way that seemed almost effortless.

Thanks to their real-life chemistry as husband and wife, it was easy to feel the connection between Florence and Anatoly. But it was Greg Knell’s acting that made it easy to believe him as the tormented Russian whose love for his country is muddied by Soviet control and his longing for freedom to live his life.

Featuring a wide range of truly eclectic musical styles, one gets hints of everything from Ulvaeus (of ABBA) influence in, “One Night in Bangkok,” to more intricate harmonies of, “Quartet,” (performed masterfully by Dean Jones, Brennan Walters, Mimi Knell, and Greg Knell). However, since Chess The Musical has undergone several revisions since its 1986 opening in London’s West End, determining the names of each particularly song and which characters are singing, is difficult because it was not printed in the program. Such an omission seems like a fixable oversight and would prove helpful to those less familiar with the musical, serving as a guide for where the story is heading and which actors are responsible for these fantastic musical numbers.

In a production that bounces between Budapest and Bangkok and features characters speaking multiple languages, dialect coach Chris Hyatt deserves high praise, along with the cast members who not only carried off passable Russian accents, but also lines in Russian and Hungarian languages. Most of the cast held onto their accents whether speaking or singing, with only a few slips in and out. And perhaps equally impressive, the American characters did not lean into their fellow castmates accents, managing to maintain an impressive distinction between the American and Soviet contingents on stage.

In addition to the ensembles’ excellence in elocution, the cast of dancers told a story in another language—using their bodies.

As one can safely assume in a piece that bears the name of the game, several chess matches unfold on stage. During the games, dancers dressed in a modern take on traditional chess pieces danced in a beautiful battle in the foreground while the two chess grandmasters battled for control of the black and white board. The choreography by Andy Young added a compelling visual component to the portrayal of the game.

Throughout the production, Young’s portrayal of Freddie Trumper—the arrogant, playboy with a genius for chess—fit the bill expertly. His character vacillated between annoying and endearing, the latter of which came through particularly well as he finally opens up about his past in the sorrowful, “Pity the Child.” However, several of Young’s songs seemed to stretch just beyond his range, leaving some of the notes a little flat.

The overall feel of the production, however, was anything but flat. The ups and downs of the storyline, the careful movements of each character’s development and the moving messages make Chess The Musical—much like the game—worthy of continued study.

Chess the Musical plays at Kayenta Center for the Arts (881 Coyote Gulch Court, Ivins) November 11-19, 2022, Wednesday through Saturday at 7:30 PM and Sunday at 6 PM. Tickets are $10-$35. For more information, please visit kayentaarts.com. 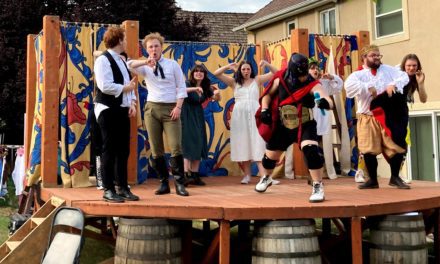