OREM — An underappreciated gem from the golden age of Broadway musicals, Bye Bye Birdie is closing out the SCERA’s summer outdoor theatre season. While not a perfect production, the show’s strong points outshine the production’s missteps. As a whole, Bye Bye Birdie is a satisfying way to spend a summer evening.

Bye Bye Birdie tells the story of fictional music superstar Conrad Birdie, who is being drafted into the army. As a farewell to his teenage fans, his manager and his secretary decide that he will give one last kiss to a randomly chosen fan. The lucky girl: Kim MacAfee of Sweet Apple, Ohio, who recently started “going steady” with her boyfriend, Hugo Peabody. Hugo is uneasy at the idea of Kim kissing a celebrity that she has a crush on and frets about what this means for their relationship. Meanwhile Conrad’s manager and secretary, Albert Peterson and Rose Alvarez, are experiencing their own relationship troubles, due to Albert’s overbearing mother Mae and Albert’s difficulty in leaving the music business. 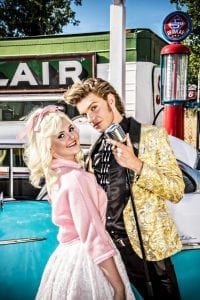 There were several problems with this production, but none of which were severe enough to ruin the overall experience. First was the terrible pre-recorded music by Right on Cue Services. Every song in this score was tinny and artificial, as if it had been mixed on an outdated synthesizer. The songs in Charles Strouse‘s score that were heavy in strings and brass (like “A Healthy Normal American Boy” and “One Boy”) suffered most. Right on Cue is SCERA’s normal supplier of pre-recorded music, and normally there are no problems with productions that use their services. I don’t know why Bye Bye Birdie has such a terrible recording.

Another weakness of this production is that the men struggle to create performances that could hold my attention. In Utah, the male casting pool sometimes is stretched thin during the summer, and often amateur productions are the first to suffer. For Bye Bye Birdie, this meant that the leading role of Albert Peterson was played competently, but blandly, by Ben Denton. His vocal range covers the role nicely, but his acting was too flat in early scenes to make me believe that Albert was trapped between the demands of his mother and his girlfriend. Denton’s performance improved in the second act as he added energy and emotional expression to his performance. Additionally, his performance in “Talk to Me” helped give the character some much-needed heart. 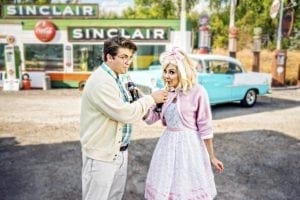 In the role of Conrad Birdie, Ian Webb eschewed the typical Elvis impersonation for the role. While this made his portrayal his own, it also made the character generic. But I liked Webb’s detached manner when dealing with his fans in the first act, and his rendition of “One Last Kiss” was a strong finish to the first act. More difficult to watch was Grant Holden as the patriarch of the MacAfee family, Harry MacAfee. His telegraphic performance never sounded like he was doing much more than reciting lines, and I felt that his scenes with the MacAfee family didn’t have the reality of a lengthy family relationship behind them.

In comparison, the women in the cast were stellar. Foremost was T’naiha Ellis, a firecracker of an performer with a wide emotional range in her acting. Her performance of “One Boy” gave the production its first shot of emotion, thanks to her wistful rendition of Lee Adams‘s lyrics. And the pain and frustration in “What Did I Ever See in Him?” served as a backdrop for the rest of her character’s actions in the second act. Ellis also has charisma to spare, and I was impressed that she could singlehandedly sing “Spanish Rose” alone on the massive SCERA outdoor amphitheater stage and not seem diminished by the huge space.

Likewise, Rebecca Boberg’s performance as Kim was brimming with charm, especially in “A Lot of Livin’ to Do” and “How Lovely to Be a Woman.” Boberg also has excellent comedic timing, which paid off in the scene where Kim professes her love, while also showing her crush on Conrad. The comedic stand-out of the show, though, was Luone Ingram as Mae Peterson, Albert’s mother. Mae has the funniest lines in Michael Stewart‘s script, and Ingram never failed to make a punchline land. Despite the constant humor, Ingram’s portrayal of the meddling, emotionally manipulative mother was still grounded enough for the guilt trips to seem real. Finally, Hannah Biesinger stole the scenes she was in as Ursula Merkle, and I loved the energy Biesinger had as she portrayed Ursula’s excitement over Conrad’s visit.

The directing from Howard Little and Kathryn Little was, generally satisfactory. The two kept the show moving and emphasized the humor in the script, resulting in a production that clocks in at just over two hours (not including intermission). What bothered me were the little details, such as in “A Healthy Normal American Boy.” Albert and Rosie try desperately to keep Conrad from speaking to the press, but the Littles had Conrad acting like he was talking to reporters. Additionally, many of the transitions from speaking to singing (like in “Put on a Happy Face” and “What Did I Ever See in Him?”) were too jarring and abrupt.

From a technical standpoint, Shawn M. Mortensen‘s set design was my favorite at the SCERA amphitheater. The angled windows and roofs matched the architecture of the early 1960’s perfectly, and the detail in the painting was superb. The MacAfee home was best in this regard, with bold colors and soft textures that created a post-war homey environment. I also appreciated the practical lighting in some of the set pieces, which added a touch of realism to the show. Likewise, after the sun set, Elizabeth Griffiths‘s lighting design was an asset to the show, and I was pleased with the glitz of “One Last Kiss” and the intimacy of the ice house. Kelsey Seaver‘s costumes were generally appropriate for the period, with some exceptions: Randy’s skinny jeans, Albert’s first suit, and many of the shoes the actors wore. I was also confused why Conrad already had a camouflage jacket before entering the army. But Seaver was wise to create a pastel-based color scheme for Sweet Apple and to dress Ellis in flattering red and black outfits.

Bye Bye Birdie closes with a lovely performance by Denton and Ellis of “Rosie.” This song’s sweetness and sincerity are emblematic of SCERA’s entire production of Bye Bye Birdie. Like Rose and Albert’s relationship, this production has its ups and downs, but because it is unassuming and honest, it is ultimately fulfilling. The rough edges are little reminders that this is a community production full of people who believe in this show. Coupled with a strong script and an excellent score, that passion results in a show that is worthy of the respect and time of its audience.