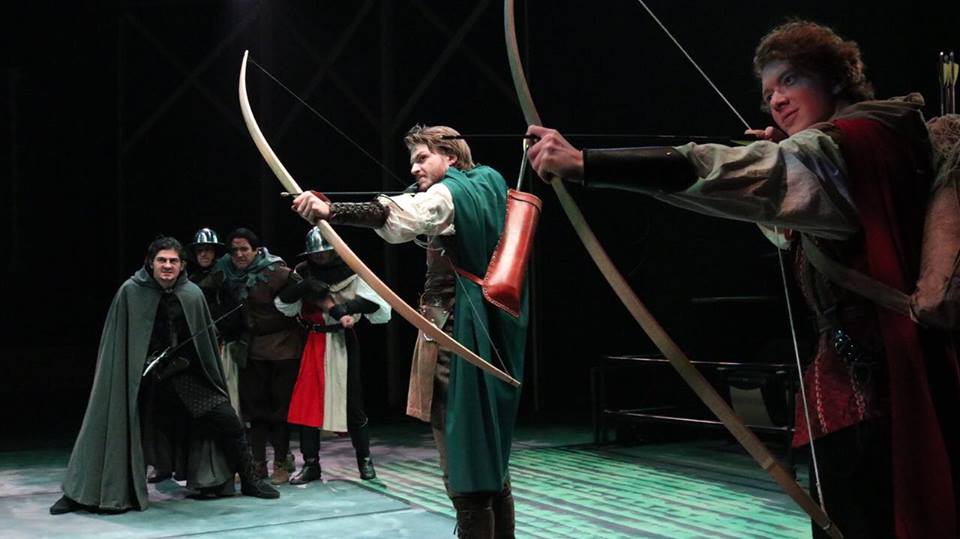 SOUTH SALT LAKE — Woooosh! A real arrow flies across the stage in the opening moments of Robin Hood under the direction of Joanne Parker at the Utah Children’s Theatre.  And this arrow was not to fly solo.  No—again  and again arrows flew in dizzying speed across the stage.  When arrows weren’t flying, swords and quarterstaffs were.  This is a production of monumental battles and intricate fight choreography.  Fortunately, it is also a production of solid stage direction and good acting. 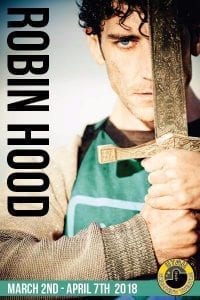 Joanne Parker opened the show with warnings: First, that the battles on stage would seem rather threatening to the audience members in the rows closest to the thrust stage, second that the epic scope of the Robin Hood story made for a longer show than is normal for Utah Children’s Theatre (two hours, instead of one and a half).  Fortunately, the battles she warned about first made the longer time seem much shorter.  Indeed, in spite of the many scenes, the play moves quickly and there is much for the little eyes in the audience to feast on in the actions of the characters, if not in the scene design. James Parker’s sparse set, consisting of bare trees and tall posts, fastened geometrically at the top, was minimalist, providing the suggestion of both forest and castle simultaneously. The set also visually impressed a proverbial cold, dead winter: a time of bleak foreboding that helped justify Robin Hood’s crimes.  So, too, the black background provided a dark canvas to highlight the medieval period costume designs by Julie Anderson, impressive in their detail for both men and women, even down to their underpants (more on that to come!) 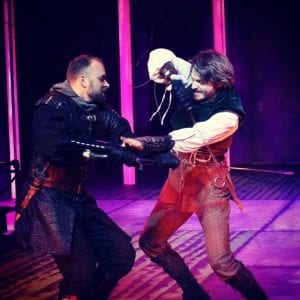 Potential audience member should know this production of Robin Hood is not a staged re-telling of the classic Disney Cartoon, full of foxes, lions, and bears.  No, if I have learned anything in the half-dozen shows I have seen at Utah Children’s Theatre, it’s that they aim to reorient children’s expectations of classic stories, directing them away from the glossy Disney versions and back to their rough origins in folklore or book. This play is no exception. It is not without humor, but it is dark.  Even violent. It tells the story of Robin Hood (played by Spencer Hohl) and his cousin Will Scarlett (played by Lucas Vayo), as they protect the working class from Prince John (played by Bryson Dumas), who is robbing them of their livelihood in the form of taxes in order to make himself rich and powerful in the absence of his brother, King Richard (played by Steve Harmon), who is fighting in the Crusades.  During their fight, Robin and Will form a band of Merry Men who delight in outwitting and outfighting Prince John’s cohort, led by Guy of Gisourne (played by Christopher Taylor) until Richard returns.  In between all the fighting, there are romantic intrigues, of course, as Maid Marian (played by Lexie Thomsen) falls for Robin in spite, or because of, his rebellion, and as her Lady in Waiting, Bess (played by Meighan Smith), lets herself be pursued by Little John (played by Chris Harvey). 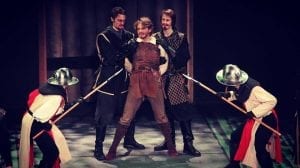 Unless the children are somewhat familiar with the Robin Hood story, the play is a bit hard to follow.  The actors speak fast, with British accents, and in a manner more formal than modern speech. While this mode of speaking elevates the play into the magical world of folklore, it also makes it less accessible to the youngest audience members.  Thankfully, Parker’s direction is able to compensate for some of linguistic detail that flies over the kids’ heads.  It is always clear who the bad guys are and who the good guys are.  Indeed, the stereotypes of fairy tales came alive on stage, but without falling flat.  There is motivation enough on both sides to keep characters from being bad or good for their own sakes.

Without question, Hohl in the role of Robin Hood carries the weight of the production.  A gifted actor, he crafts a fine balance in his character of mischievous merry-making and concerned gravitas for his friends.  His foil, Guy of Gisbourne, is truly Robin’s opposite, and Taylor plays him with satisfactory annoyed misery.  Both men are supported by their fellows in a spirit of camaraderie that drives the play.  The fellowship between actors make the fight scenes feel real by giving the impression that each character is fighting for the other.  In this respect, I feel that this play, although it undoubtedly has wide appeal, is a perfect production for boys. While there is romance, the story of Robin Hood stresses teamwork for the common good and then displays that teamwork through epic battles that engage the spirit of adventure that runs deep in the blood of little boys.  I should know; I brought three of my own sons, ages 8, 6, and 4. 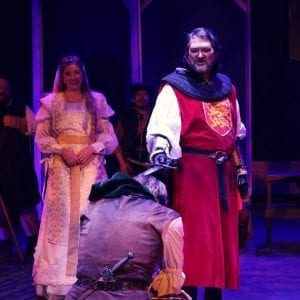 I watched my boys as they watched the play.  Their eyes were glued to the loud action on stage.  The fight choreography (also by Spencer Hohl) is impressive, involving nearly the entire cast at times, utilizing every inch of the stage and all elevations:  At one point Robin Hood even flies through the air on a zip-line of sorts, only to jump to the ground and continue the battle on the stage below.  So, too, the archery tournament with its real arrows shooting backstage, held their attention in the spirit of competition. (My youngest son noted afterward that his favorite part in the play was when the word “Bullseye!” was excitedly announced.)  Even medieval potty humor sneaks into the production, when Robin Hood requests that Guy of Gosbourne and his cronies be stripped of their pants once captured.  In the next scene the humiliated men do don Medieval underwear in the form of flowing white shorts that, none-the-less, are so ridiculous and comical to behold that the kids in the audience cannot contain their giggles.

There were, of course, many girls in the audience who also seemed enamored by the battles on stage.  For them, Maid Marian was a suitable heroine, though her character is not nearly as well rounded as Robin’s. Indeed, Thomsen plays Marian with enough disdain to last a lifetime, though the second half of the play brings a transformation to her character, making Robin’s attraction to her more believable. Smith’s portrayal of Bess is also a delight, and she is happily matched with Harvey’s Little John, as they both weave humor into their scenes, even when they were silent.  A final standout in comedy is Zach Vayo as the Sherriff of Nottingham, who plays his character with a delightful self-affected pride.

There is no doubt that this production of Robin Hood is a good night out at the theatre and an event to be shared.  By mounting this classic, time-tested tale, the Utah Children’s Theatre contributes to our culture’s collective possession of this story, evidenced by my own six-year-old’s re-enactment of it as soon as he arrived home. But if you have a child that tends to be a little less-enthused by theatre, remember there are always the brownie sundaes during intermission.  Those will make any good production even better. 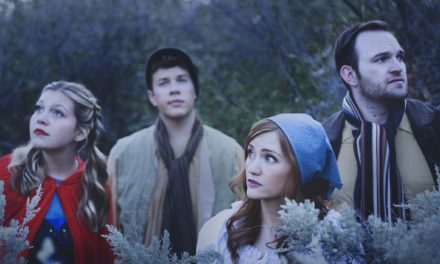 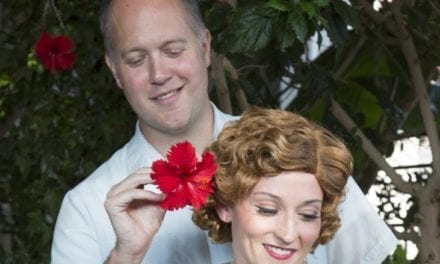 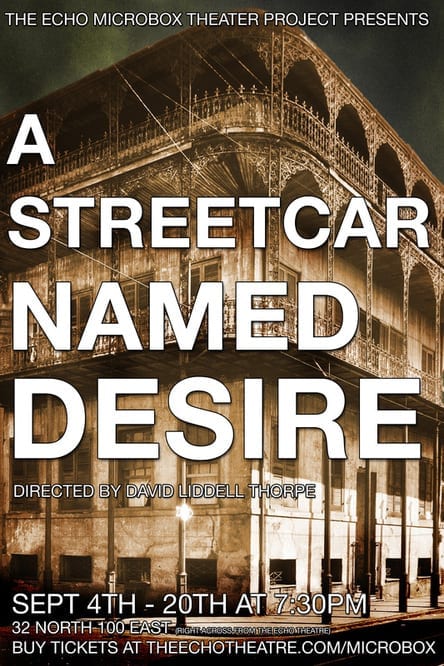 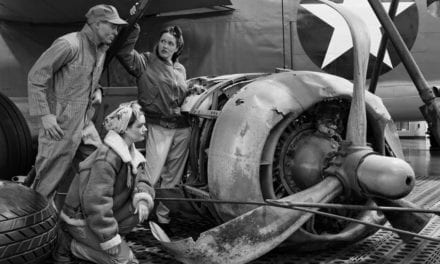