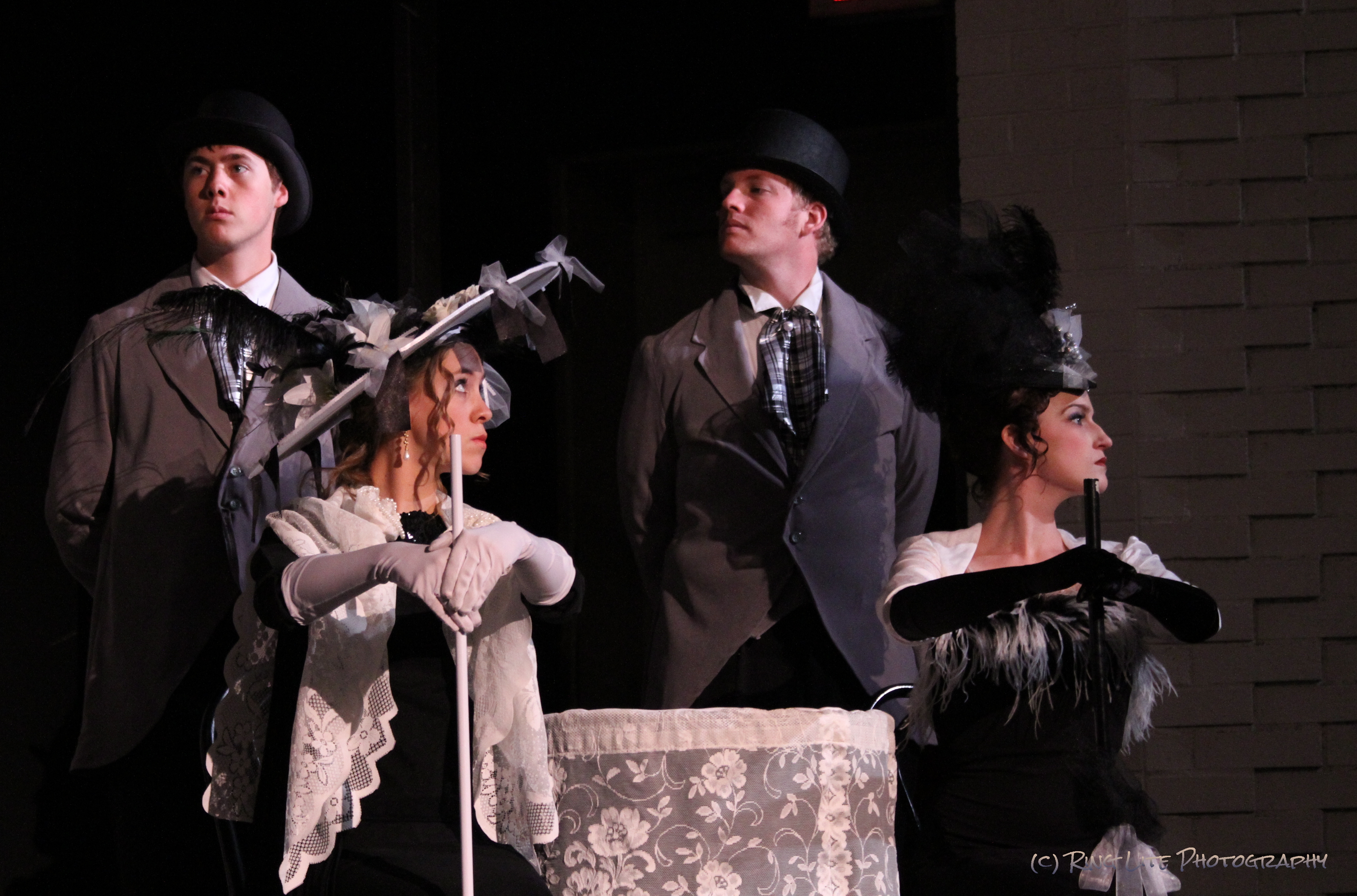 SPANISH FORK – Henry Higgins and Eliza Doolittle are two names that most theater patrons probably know by now, but I recently had the pleasure of meeting these two for the first time. It almost feels like confessing a sin when one admits that, somehow, they have never seen one of the “classics.” Well my penance has been paid and it was in the most loverly way. The Spanish Fork Community Theater’s production of Alan Jay Lerner and Frederick Loewe’s My Fair Lady is a beautiful production. It manages to be visually beautiful and emotionally nuanced, while still dealing with, and overcoming, some of the “typical” community theater issues. The plot of the show is fairly well-known: Henry Higgins (Trevor Brackney) and his new friend Colonel Pickering (David Henry) are two linguists who stumble upon a brash, cockney-wielding flower girl, Eliza Doolittle (Shannon Eden). The two speech enthusiasts make a bet that Higgins will be able to train Doolittle to speak correctly and pass her off as a lady, but by the end of the experiment, emotions and relationships have put a cloud over what started as a friendly wager. The show examines some fairly deep questions, such as: What is the true source of someone’s personality? Will changing the exterior change the interior? And is changing someone “for the better” always the better option?

One of the most encouraging things about this show is its choice of Brackney and Eden as the lead actors. Eden is a spectacular Eliza. Her singing is gorgeous and a joy to listen to. Though small in stature, Eden has a strong presence on the stage. Her performance drew me in and any time she was on stage she was actively involved in the scene. I particularly thought that she was able to portray a very three dimensional Eliza. She has a great range of emotion which allows her to convey punch lines or Eliza’s distaste with Higgins using just a well-timed facial expression. Eden’s portrayal of Eliza’s transformation is convincing and powerful. She handles the transition from comedic flower girl to woman-of-power with finesse. While the overall performance was great, there were a number of moments in which Eden’s diction got lost in the Cockney accent. While I understand that the Cockney being hard to understand is essentially a plot point, occasionally I would miss whole sections of dialogue because of the accent.

Eden also has a strong counter-part in Brackney. The role of Henry Higgins is a sort of anti-hero. He’s not really someone that the audience wants to cheer for because he’s rude and misogynistic, but at the same time, the audience wants him to succeed in his work with Eliza. Brackney has a wonderful interpretation of Higgins, and makes Henry a man to be loved, hated, and pitied. Brackney has the ability to be in command of the stage whenever he is in the scene. This is mostly due to a high-energy performance that allows him to fill the room. However, occasionally this energy got away from him and his acting or singing would start to get a little “shouty.” This was most noticeable for me during “Never Let a Woman in Your Life,” which seemed to be missing a few levels between normal composure and over the top energy. However, Brackney’s performance was engaging and fun to watch. Both he and Eden performed at quite a professional level.

The supporting cast was also fairly good, though as a whole, they seemed to be less experienced. David Henry did fairly well as Colonel Pickering, though there was some nervous energy that prevented him from being too comfortable on stage. However, when he began to sing he was visibly more relaxed. The songs he performed were great. I especially loved his efforts with Brackney and Eden during “The Rain in Spain.” Henry had great chemistry with the two principles which shone through in this song. Conversely, Kevan Mills was good at portraying a very natural Freddy during his spoken lines, but had struggles during his songs. Ray G. Gwilliam was really fun to watch as Eliza’s father, Alfred Doolittle. Gwilliam was extremely comfortable on stage, and had one of the stronger accents of the evening. His songs and monologues were directly to the audience and he just seemed to be using his natural voice and posture. Director Adam Cannon should be commended on his efforts to take this show to something beyond the all too common musical fluff that seems to be so common. Cannon mentioned in his director’s note that he tried to have the production stay true to the musical that everyone knows, but also to the lesser-known Shaw play that the musical is based on, The Pygmalion. This was evident in some of the later scenes between Eliza and Henry, specifically in the scene at Henry’s mother’s house. The dialogue suddenly takes a turn from frivolous and fun to something more along the lines of a philosophical debate. The influence of Shaw is massive here (I wouldn’t be surprised if whole sections of Pygmalion were used verbatim), and Cannon handled the scenes in a way that made the audience think. For a few moments, the play went beyond escapist theater and became something more substantial. It was very encouraging to see from a community piece.

There were a few weak spots in the direction as well. Most of these weak spots came from having a massive cast and a massive stage. With around 60-70 actors in a show there’s a lot to think about, and one of the major issues is finding something for everyone to do. The crowd scenes suffered with many groups of people being lost in the background. One of the most distracting moments came during “Why Can’t the English?” This is a song where Henry is singing to the crowd and Colonel Pickering. Eliza was sitting near the front of the stage, and in an attempt to add a cute subplot, one of the chorus members was coaching another chorus member on how to woo Eliza. This was all done through pantomime near the middle of the stage, which had the effect of taking all the focus away from the song and Brackney’s performance. This little subplot (and others like it) popped up throughout the show, and though they were meant to highlight some of the chorus members, they really just pulled the focus.

The final group that deserves a mention is the wonderful design team. The set was marvelously versatile and massive. The stage at Spanish Fork High School looks like a widescreen movie; it is easily two or three times wider than it is high. Set designers Greg Duffin and Joni Newman tackled this problem by building a unit set that used a little furniture and some flown-in drops to become 4 or 5 different locations. The costumes were also extremely well designed and gorgeous. Designer Mareen Robinson did an especially good job with the black and white themed horse race. It was simply spectacular and far beyond what I have come to expect from the community level because everyone on stage just looked amazing. The dance numbers, choreographed by Bethany Taylor, were not outlandish, but took into account the huge, yet inexperienced cast. I feel that not trying to go beyond your resources is a very mature choice for a choreographer, and is one that adds to the show by focusing on simplicity. 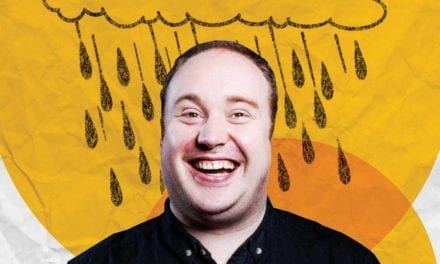 BYU’s OFF THE MAP succeeds–once again 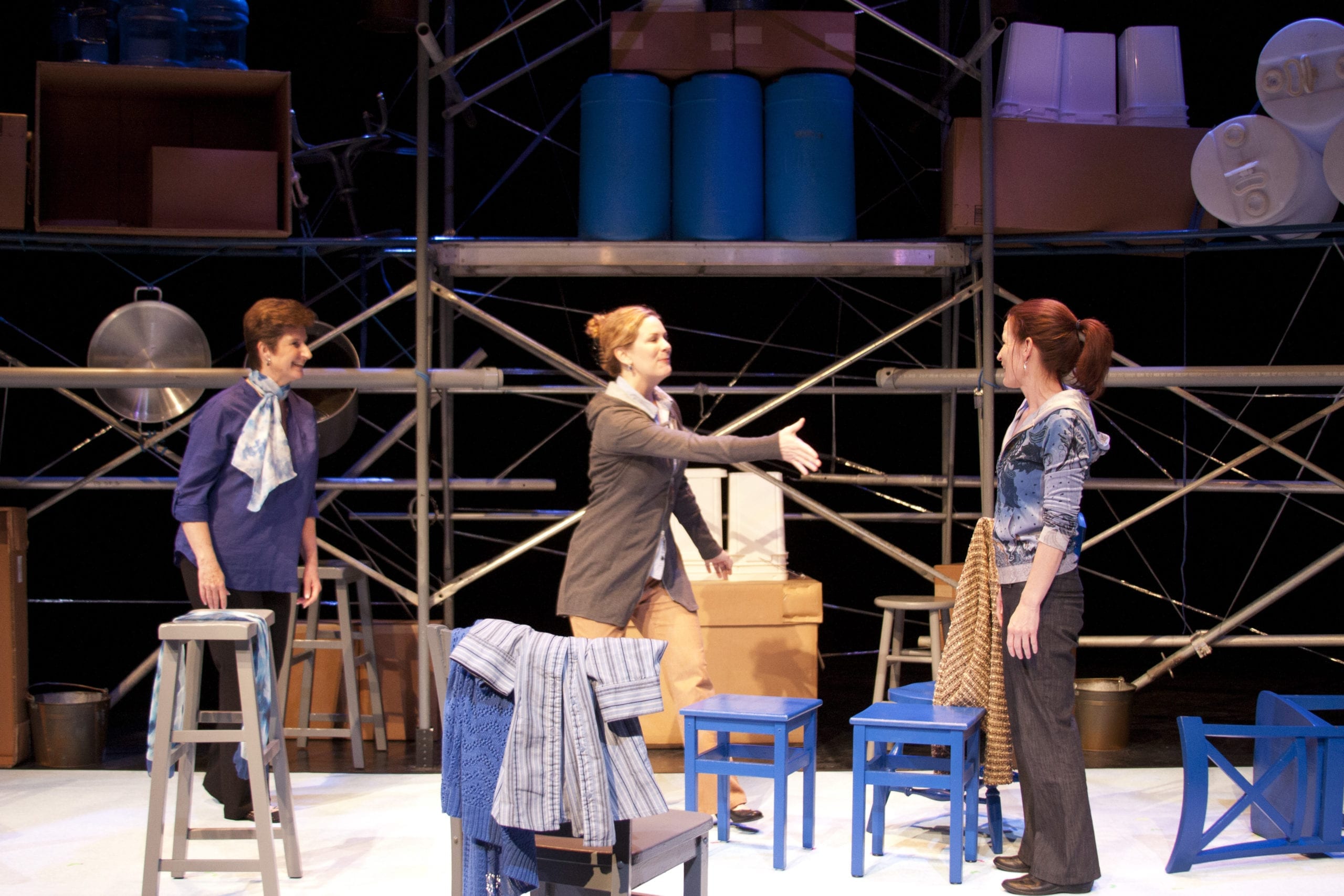