CEDAR CITY — I’m a huge Jane Austen fan, having read all her books a few times and seen every popular film adaptation. I love her wit and humor. I love the romance and social commentary. I love the magic her words bring to everyday occurrences (well, “everyday,” by 19th century British standards). So I was excited to see this new adaptation for the stage written by Joseph Hanreddy and J.R. Sullivan.The set (Jo Winiarski) was perfect for the mood. The set, which remained stationary through the entire play, was in the fashion of an aristocratic sitting room. The carpeted room was on a slightly raised platform with sides resembling the polished and decorated sides of the piano that sat on one side of the room. The back of the room was all windowed doors which allowed us to see characters coming and going. Combined with the period costumes (Bill Black), the tone was perfectly created for the world of the nineteenth century English gentry.

We open on a morning at the Bennet’s home at Longbourn. Mrs. Bennet (uproariously played by Ellen Crawford), is in a panic upon finding out that the nearby estate of Netherfield has been rented by a wealthy gentleman, and Mr. Bennet (brought brilliantly from page to stage by Jeff Steitzer) doesn’t understand how very fortuitous this occurrence is for his daughters.

In the midst of this barrage of feminine distress, we make the acquaintance of the Bennet daughters: our protagonist, Elizabeth (Kate Cook), the wit; Jane (Melinda Pfundstein), the soft-spoken beauty; Mary (humorously portrayed by Emilie Susan Andersen), the socially awkward bookworm; Lydia (Sara J. Griffin), the silly airhead who is determined to, in Mr. Bennet’s words, make “a spectacle of herself;” and Kitty (Barbara Jo Bednarczuk), her equally silly partner in crime.

Transitioning through each scene, the stage was never empty of actors. Rather, director Blake Robison innovatively had characters coming and going in one stream of action. Often, one character would be recounting an event while  that event would occur simultaneously on stage. This method both highlighted the situational humor and made the pace of the play more attention grabbing.

Enter the suitors. Mr. Bingley (Jack Noseworthy) was just as likeable as in print, and a touch of humor made him a delight. Mr. Darcy (Michael Brusasco) was just as cold and unhappy as any adaptation out there, and he was just as likable as ever once he let down his façade. Dastardly Mr. Whickham (Quinn Mattfeld) wasn’t as hate-able as usual, but I thought it made him even more convincing as the duplicitous charmer.

And of course, Mr. Collins (Brian Vaughn)! I can’t say enough about how much I loved Mr. Collins. Eccentric as ever—slightly greasy hair as usual—but hilarious. Personally, I think Jane Austen would have applauded a Mr. Collins that was finally not painful to watch. Indeed, he was a joy. The humor Brian Vaughn brought to the character was fantastic, and—while I still couldn’t blame Elizabeth for refusing his offer—I was actually looking forward to seeing him again at Rosings Park.

Complicate this with a designing aunt, Lady Catherine de Bourgh (the perfect Carol Linnea Johnson) and her betrothed-from-the-cradle daughter Anne (Emilie Susan Andersen), and you’re off to an evening of love and laughs.

The characters were endearing and seemed to leap from Austen’s words to the stage. So many minor characters really stole the show in ways they haven’t since Austen wrote them. Jane Austen puts so much humor into her characters, but – I’ll be honest – I can’t stand Mrs. Bennet, Mr. Collins, or Lady Catherine in any film adaptation. They’re so easy to hate. But they were the highlight of this show. I wanted them on stage as much as possible. The only actor I thought fell short was Kate Cook as Elizabeth. Rather than charmingly clever, she came off as unduly offended and irritable. Her wit was overshadowed by her excess vexation.

The ingenious transitions, the humorous side-characters, and the love story didn’t quite make this play engaging enough. At 2 hours and 40 minutes, the play dragged. I love the book, love the story, but didn’t 100% love the play. There were parts when the love story in particular dragged and I wished some character would just give us a synopsis of what happened rather than watching every single conversation. The men I was with bought a lot of caffeine during the intermission and commented that they thought they’d left such romantic melodrama back in high school.

Overall, the play was well executed. The English accents (dialect coach Jack Greenman) were flawless, the sound (Joe Payne) and lighting (Jaymi Lee Smith) were perfect, and transitions between scenes and rearrangement of sets were impeccable (props to stage manager Becky Merold).

In the end, I got just about what I’d expected. Jane Austen’s voice was expressed on stage in a new and inventive manor, and her humor shone through. And in some areas I got more than I expected: I gained a love for characters I had never truly appreciated since I read them. If you’re an avid Austen fan, you’ll have an enjoyable evening. Just be sure to leave those faint of attention home. 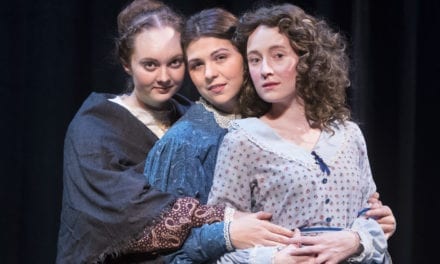 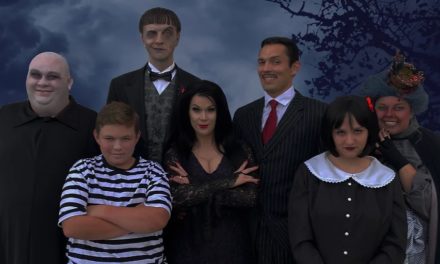