IVINS — Wrapping up the 2017 summer season, Tuacahn brings one of Broadway’s most popular and longest running musicals to the red rock canyon. With music and lyrics by Benny Andersson and Bjorn Ulvaeus, (members of the 70’s pop group, ABBA), Mamma Mia! chronicles the life of Donna, a middle-aged woman who owns a taverna and has worked hard her entire adult life to provide for her and her daughter, Sophie. As Sophie is about to be married, she sends wedding invitations to three men she thinks may be her father, Donna’s obvious past love interests. With an interesting though simple plot, relatable characters, and infectious music, Mamma Mia! instantly became a smash hit during its first London opening in 1999, and is still adored by fans today. Directed by Derryl Yeager, with music direction by Michael Hopewell, Tuacahn’s production of Mamma Mia does the show justice in every way.

One can always count on Tuacahn to provide excellent and high-quality design elements. Compared to other Tuacahn shows I have seen, Brad Shelton’s scenic design seemed underwhelming at first, but came more and more to life as the show progressed. I enjoyed the simplistic, but beautiful Greek styled set pieces. There were also many nice touches such as the rotating platform, projections, and the lighted windows coming from the buildings in the background, giving a feel of a realistic village. I especially adored the platforms that would light up as cast members stepped on them. The lighting design by Nick Van Houten, worked hand in hand with the set design to effectively communicate the mood of the show throughout, as well as more practical information, such as the time of day. With glitzy and extravagant additions such as a car and horse during the number “Money, Money, Money,” I knew this felt like a spectacular Tuacahn show.

The acting was indeed on par with the quality design. The two female leads, Sophie (played by Shae Robins) and Donna, (played by Jennifer Swiderski) were both superb. In one of the beginning numbers, Robins’s voice cracked on a pivotal note in the song. I only point this out to express how impressed I was with the professional and attractive manner in which Robins handled this moment, all the while staying in character. I particularly liked this moment as well because it served as a nice reminder that the human body is sometimes fallible, making Robins’ realized vocal talent, as well as the rest of the cast, all the more impressive. Robins sang through the rest of the show beautifully and skillfully.

As Donna, Swiderski is highly expressive, making her character incredibly easy to connect and empathize with. I was exceedingly impressed with her realistic emotions and actions, causing me to root for her character from the very beginning. Although both of these actors were clearly very skilled at their craft, I was most taken by their mother-daughter connection. Not only did the two look similar, they were able to create and depict a relationship that appeared life-like and not just a representation. This was apparent in the way the two would interact with each other, often getting annoyed or frustrated with the other, but never doubting the deep love they had for each other. This is made known perhaps the best during a deeply touching moment when Sophie tells her mother that she is proud of her. Robins’ also has an impressive and realistic chemistry with her love interest and fiancé, Sky (played by Matthew Helfer). 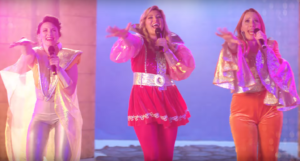 Also notable are Donna’s two friends, Tanya (played by Sasha Judkins) and Rosie (played by Shari Jordan). The two truly shined in their respective musical numbers, “Does Your Mother Know,” and “Take a Chance.” It is as a trio, however, that these actors really excelled, providing an authentic and invigorating chemistry, as well as most of the quippy humor throughout the show. Additionally, the three men who each could be Sophie’s father, Harry Bright (played by Matthew Tyler), Bill Austen (played by Steve Judkins), and Sam Carmichael (played by Todd Dubai), are all charming and funny in their own right. I was glad to see three very distinct and separate personalities in these men as they discover why they were invited to Sophie’s wedding.

Possibly what I found most impressive was the excellent choreography in the dance numbers, created by Darryl Yeager and associate choreographer, Veronica Yeager. I was a bit apprehensive at first as the choreography in one of the opening numbers “Honey, Honey” seemed awkward and unnatural to me. However, by the number “Money, Money, Money,” the show had taken off, and the choreography, as well as the direction, just seemed to get better and better. Examples of exceptional musical numbers that stood out were “Dancing Queen,” particularly in the youthful moments of using bedroom items, such as a hairdryer or brush, as a microphone. In these moments, the characters Tanya and Rosie are so encouraging and fun trying to cheer up Donna that she just can’t help but get into it as well. “Mamma Mia” and “Voulez Vous” were certainly standouts as well. Both Yeagers excel at creating dances that match the intensity of the music and the mood of the scene, whether that be chaos, confusion, of joyfulness. Paired with the skilled dancers that were able to communicate the emotions through their movements, these numbers in particular were truly able to succeed.

Mamma Mia! is a high-energy musical with captivating melodies that will leave me singing along for days after seeing the production. I have a hard time imagining theatre fans not enjoying Tuacahn’s exciting production. Not only did I find myself wanting to sing and dance with the cast, I enjoyed contemplating various themes about marriage that the show brings up. Most interestingly, this includes a paradox between finding and acting on love or choosing motherhood, and remaining an independent and strong woman. Ultimately, the production made me want to revel in my youth, cherishing the life that I have and living in a way that I won’t regret 20 years from now. Mamma Mia! is a great way to add some excitement to your life and has something everybody can enjoy.