SALT LAKE CITY — The phrase “trigger warning” was designed for works like Blackbird. This dark little show is difficult to watch, even for those without trauma. But though trying, agonizing, and cruel, it is also the most rewarding piece of theater I have seen this year and indeed one of the most evocative pieces I have ever seen. 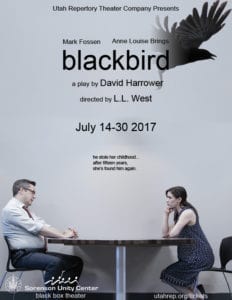 The play, written by David Harrower, begins with 27-year-old Una, played by Anne Louise Brings, being ushered into an office break room by 55-year-old Ray, played by Mark Fossen. At first, the relationship between the two is unclear. She bemoans the state of the room which is covered in trash and criticizes the janitorial staff, all of which Ray stammeringly defends as not his fault. Through tricky, dancing, and building dialogue, it is revealed that Ray had sex with Una when she was 12. He seeks to understand her motives in coming, and, through a constant tugging wire of tension, the entire story is revealed. Blackbird is powerful and heartbreaking, and it left my mind spinning with thoughts, questions, and too many emotions.

The first thing I appreciated about this play was the casting. Fossen towered over Brings, his imposing figure a stark contrast to her diminutive size, giving a visual representation of the power dynamic of their past selves. Though Fossen played Ray as a largely gentle person, his height gave him a certain prodigious presence in the small space. The space itself was another highlight: director L. L. West staged the story in a break room that was being remodeled, dry wall covered in plaster and primer and a ladder leaning against the wall. It was incredibly fitting to the overall tone of the story and, I thought, a clever choice. I always appreciate a production in which the direction holds an almost symphonic influence over the action of the play, and this piece was so carefully orchestrated that every note rang out loud and clear. West had a vision for this piece that was executed in every detail, from the strict adherence to the script’s tricky rhythm to the raggedness of a chair not moving across the stage as smoothly as it should or Ray having to struggle with a plastic bag in order to retrieve a water bottle for Una. West emphasized the natural, human side of this story, giving the actors freedom to simply live on stage and giving the audience the opportunity to view these two people as simply people. 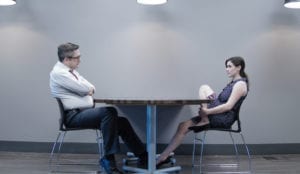 With a cast of basically only two, there was an awful lot of heavy lifting required of Fossen and Brings. To say that both actors were well-suited to the roles would be an understatement. Brings brought levels of passion, anger, sorrow, and gravity to Una that showed seasoned and careful attention to script and character. A particular moment of vulnerability that broke my heart was a time in which the office lights burn out, sending Una into a state of panic. She has already divulged so much of her remembrances at this point that she is in a very open place, her recount of the events that transpired between the two affecting and distressing. When the lights go out, however, Brings reaches out to Fossen as though to grab hold of him, seeking comfort from someone she used to trust. It was profoundly moving, matched only by her desperate tears a moment later as Fossen exits the room, triggering her feelings of abandonment and betrayal.  It was impossible not to feel empathy for this battered and broken character, and I was moved to tears more than once.

Fossen had a special challenge as the perpetrator of the crime against Una. The script gives Ray more layers than a mille-feuille, every layer as complex and bittersweet as the next. The case is a typical one: he claims to have had real feelings for the young Una, his pursuit of her unplanned and genuine. I attended the talk-back with the actors and director after the show, and it was a discussion that might have gone on for hours had producer Johnny Hebda not kept us hemmed in. No one knew how to feel about Ray, and that was not only a tribute to the script but to the acting as well. Fossen’s soft-spoken, gentle Ray was a teasingly sympathetic figure, one that I could very well imagine trusting and admiring. His quiet consideration as he listens to Una tell her side of the story was played with compassion and sweetness, delivering a perplexing riddle to an audience expecting to outright revile this man.

If theatre has any responsibility, it is to tell the stories that may be too operous to view with any kind of neutrality. This is the gift that this little production has brought to a Utah stage, and I cannot recommend it enough.