LOGAN — I find that true life is always more interesting than fiction. So I was fascinated to learn about Joseph “John” Merrick, a whose life forms the basis for the Lyric Rep’s production of The Elephant Man. Merrick lived in England and Belgium in the late 1800’s and suffered from a horrible skin condition that caused severe deformities, causing his skin to appear thick and lumpy with huge growths on his right arm, forehead and lips, and making his speech inhibited and difficult to understand. Additionally, the enlargement of his hips lead to injuries causing permanent lameness and the skin condition created an offensive odor. Merrick’s life was a true tragedy, particularly his early years where he was met with much cruelty and worked on the streets and in freak shows to support himself. Merrick was also frequently robbed and taken advantage of, notably by the side show manager “Ross.” Things improved for him, when a kind surgeon Frederick Treves (Gordon Dunn) rescued him and took him to the London hospital where he remained for the rest of his life. While there he garnered the compassion of many members of London Society, including renowned film actress Mrs. Madge Kendal who showed him kindness and dignity, and other dignitaries who financially contributed to his stay.

The Lyric Rep production of The Elephant Man embraced the show’s historical roots by displaying historical pictures in the theater during the play. This made the story accessible and real, and were successfully worked into Dennis Hanson’s set design. The “elephant man” was played by Nick Selting, though no make-up or prosthetics were used to create the deformation. Rather, the audience is left to use their imagination to create what Merrick might look like. Selting’s convincing physicality and vocal stylization to create his performance. The result is a sincere portrayal and a multifaceted and believable character. I appreciated the fact that Selting didn’t allow the physicality to overpower or mask his acting; rather it was simply a layer on top of an engaging and relatable character. His heartrending delivery of the line “I am not an animal!” successfully summarized the theme of the production. And Settling’s scene at the end of Act One, where Madge Kendal (played by Lacy J. Dunn) touches Merrick’s deformed hand for the first time (and the first time he was ever touched by a woman), was moving and powerful. Both Setling and Lacy J. Dunn gave powerful performances that affected me. Lacy J. Dunn also helped to bring out the humor in many of the scenes with her excellent comedic timing; enhanced by the upright and formal physicality of the Victorian age she successfully embraced.

Gordon Dunn as Treves gave a compassionate portrayal of the kind, yet strong willed doctor who remained a loyal friend until Merrick’s early death. W. Lee Daily was menacing as Ross and convincingly depicted the despicable and selfish characteristics of the side show manager. Jonathan McBride as F. C. Carr Gomm and Chris Klinger as Bishop William Walsham How acted their parts well and contributed to the drama of the story in many of their scenes, deftly enhanced by their exquisite handling of the dialect and mannerisms of the period.

I generally approved of Kenneth Risch’s direction and was impressed by the detail he created in the various characters. However, at times I found the pacing slow and certain scenes indulgent, laden with pauses. In such a emotionally heavy show, this made moments feel occasionally stale. I found the characters interesting, but the script somewhat lacking in conflict and drama and felt it was unnecessarily long. Additionally, I found the ending somewhat anticlimactic.

The costumes (under the design of Carey Hanson) were interesting and well crafted, enhancing the characters and successful establishing the setting and time period. The lighting (under the design of Anthony Johnson) helped established the dark mood of the production, and gave a feeling of isolation to the central character from the rest of world.

I would recommend this classic and poignant play by award winning playwright Bernard Pormerance to thoughtful theatre audiences. The honest and emotional performances by a talented cast, accompanied by a strong design team make The Elephant Man a worthwhile night of theatre.

The last performance of The Elephant Man plays on August 1 at 7:30 PM at the Old Lyric Repertory Company (28 W. Center Street, Logan). Tickets are $12-$25. For more information, visit http://arts.usu.edu/lyric/. 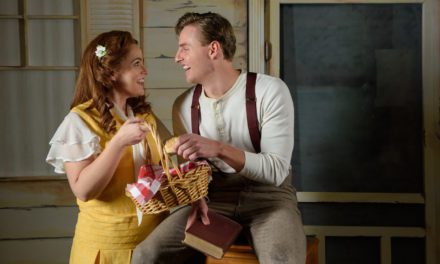