SALT LAKE CITY — The house was packed at Pioneer Theater Company on Friday.  Good for them, obviously, but I felt a bit like a can of tuna.  And that tall man in front of me perfectly blocked the onstage poker table, where a giant chunk of the show takes place; I was annoyed that I had to look around him to see.  But by the end of the show, this turned out to be my only major complaint.  I discovered that I will forget that lady next to me, who keeps touching me with her foot, as long as you make me laugh.

The Odd Couple is Neil Simon’s comedy of two very different men, who somehow manage to be best friends.  After Felix’s marriage ends, he moves into Oscar’s post-divorce disaster of an apartment.  Their living arrangement highlights their opposite habits and personalities, and the situation is hilarious to observe.

Oscar’s 8-room apartment in 1968 New York City was the setting, and Michael Schweikardt created a beautiful set.  Despite Oscar living alone for some time, Schweikardt didn’t present a bachelor pad; instead he designed a homey apartment, with Oscar’s layer of grief spread on top.  I particularly liked the kitchen chairs and the textures and patterns of the house.  I noticed the dirty fish bowl in the bedroom right away, and I liked the record player.  I didn’t understand the dry cleaned shirts hanging around, because Oscar didn’t seem like a nice-shirt wearing guy.  Maybe he was when his wife had been around? Director Karen Azenberg helped create a perfect environment in that first scene.  The characters looked hot and frustrated, the air was full of smoke.  The windows were open with blinds askew. Brenda Van Der Wiel’s sweat-stained costumes added a lot to the ambiance, as well.  I was really impressed by the attention to detail that Azenberg and her designers had.

The actors were terrific.  Paul Kiernan, Kent Hadfield, Joe Debevc, and Nathan Sears were a cohesive, give-and-take team, as the group of poker buddies.  They each showed such variety of emotion: bickering with each other, then unanimously worrying about Felix, faking calm when he suddenly appears, and sympathetically comforting him.  None of these men were flat at all.  I did, however, miss a few lines at the poker table in the first scene, which was a shame.

Mark La Mura, as Oscar Madison, and Jeff Talbott, as Felix Ungar were two talented actors who were perfectly cast.  Both were excellent at milking those moments of silence, using their physicality and their facial expressions.  One of the funniest parts of the show contains very little dialogue (but it doesn’t contain a vacuum cleaner). La Mura and Talbott were a funny pair, never openly enjoying each other’s company, but still cheering each other, and keeping the story together emotionally, thanks to the other.  I was impressed that after Felix and Oscar had been together 3 weeks, La Mura looked so old and tired.  I don’t know if they used makeup or if it was just his acting, but it was great to see the effect the stress had had on him.  Both men were so funny, and both pulled on my heartstrings.  In the date scene, I really did want them to just hurry up and eat that London broil, poor Felix. Although I liked the poker players’ costumes a lot (there were some great colors), nothing compared to the Pigeon sisters, whose outfits were an awesome change from the previous masculinity that dominated the show.  I especially liked their neon-patterned hosiery.  Brenda Van Der Wiel really brought the 1960’s to the Pioneer stage. Oscar and Felix donned suit jackets for their double date, which was just a dinner in their apartment, but it was a reminder of how times have changed.

With these great actors and designers at her disposal, Azenberg created some great stage pictures.  I loved the way she moved the four pokers players, plus Oscar, around the apartment, and lined them up at important moments.  The most “Kodak moment” of the show was when Felix and the two girls were crying on the couch.  I just like the way Azenberg balanced the stage and coordinated movement.  Another strength of the production was the contrast, which added to the comedy.  Oscar yelling and Felix obliviously calm, Oscar beaming with joy at the girls while Felix scowls, sudden changes in volume or emotion—these ups and down made it a really easy show to watch.  There was only one moment when I wondered, “Where is this show going?”  And it turned out that the production was nearing it’s close.

The Odd Couple at Pioneer Theater Company made me laugh and I enjoyed it like a dessert.  The pigeon sisters (Amy Bodnar and Helen Anker) were the frosting on a delightful cake, and Felix’s sinuses were the sprinkles.  I’m really pleased with Karen Azenberg’s directorial work and I think she’s doing great things at Pioneer.

The Odd Couple is playing at Pioneer Theatre (300 S. 1400 E. in Salt Lake City) Mondays through Thursdays at 7:30 PM, Fridays and Saturdays at 8 PM, and Saturdays at 2 PM through April 6.  Tickets are $25-$49.  For more information www.pioneertheatre.org. 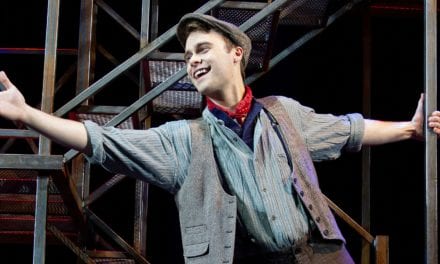