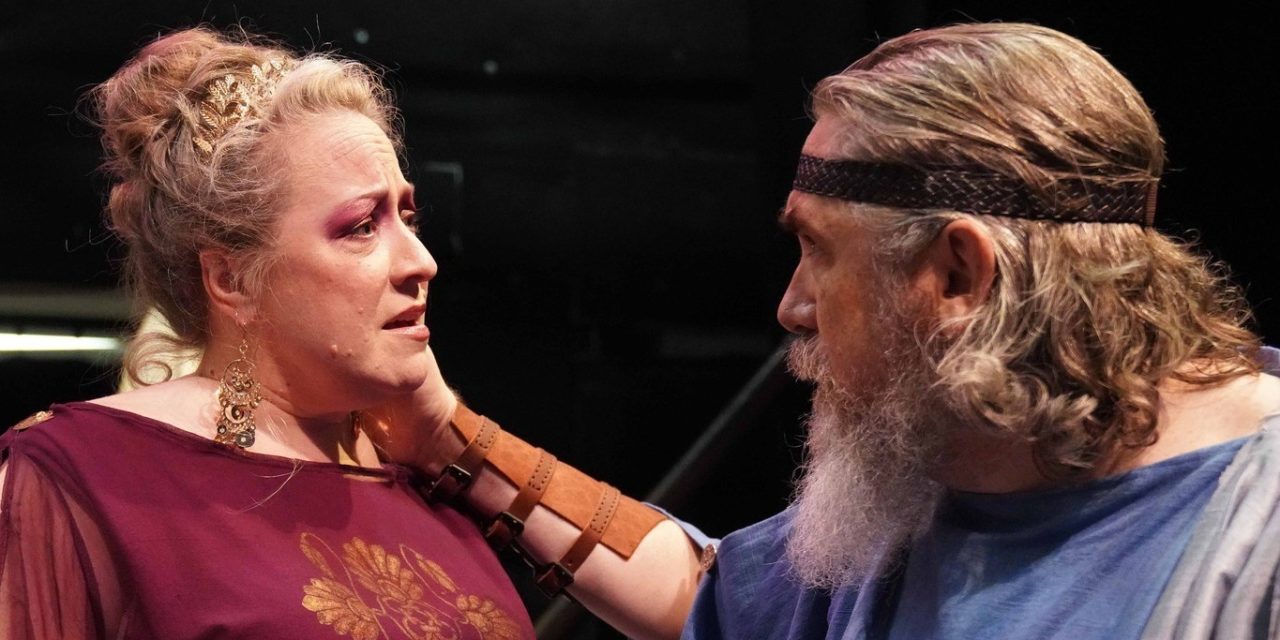 SALT LAKE CITY — It has been long established that “hell hath no fury like a women scorned.” Euripides’s Medea, dating back to 431 BC, may be one of the earliest examples of the adage.  The Classical Greek Theatre Festival has mounted a production that tells this tale full of power, gender, and vengeance.  Medea must find her way through a patriarchal society, grasping for any sense of autonomy.  While finding control and autonomy through murder is not a contemporary venture, Medea gives a glimpse into human nature that still rings true thousands of years later, showing that “Stronger than lover’s love is lover’s hate. Incurable, in each, the wounds they make.”

Medea opens with Medea’s husband, Jason, leaving her for another woman.  After all, this new wife is a princess, and Medea a mere barbarian.  Per Jason’s defenses, he did this for Medea, to offer her and their two children a better life.  Jason argues he has made a sacrifice for the family, and out of the kindness of his heart he is willing to keep Medea on as his mistress.  Not surprisingly, Medea does not see the situation as Jason does, and after begging for one more day before banishment, she seeks her revenge.  First, she kills the king and Jason’s new wife.  Next, to truly twist the knife in Jason’s fresh wounds, Medea kills her only two sons. 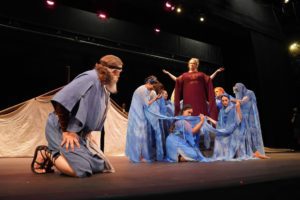 Medea is a quick moving, 90-minute show directed by Stephanie Stroud and set on a stage of fallen ship masts upon a backdrop of a projected seascape (light design by Spencer Brown).  With waves crashing and hues of dawn and dusk, I enjoyed this set and classic costume propelling the audience back to ancient Greece. While I found the projected sea scape to be a perfect backdrop, the lighting design could have been more varied in different scenes to aid the changing of the tones of the play and parallel Medea’s plunge into a vindictive madness.

April Fossen convincingly portrays Medea and her descent into madness. This Medea is hurt, then enraged, and finally morphs into a calculated killer.  April Fossen offers a powerful performance with a potent delivery; in this production, Medea can exhibit love for her children and hate for Jason with equal passion. April Fossen is especially effective in the scene in which Medea talks herself out of and back into her treacherous filicide. In the final scene, April Fossen captures the resolve and bitterness of Medea, unapologetic and basking almost gleefully in Jason’s heartbreak.  Here, exemplifying the text, “women, though most helpless in doing good deeds, are of every evil the cleverest of contrivers.”

In Medea, women are evil contrivers, but the guilty and foolish behavior of men men have driven them to this point — and Jason, played by Mark Fossen, is the greatest fool of all. Mark Fossen plays Jason as flippant and dismissive, as Medea scolds him for his betrayal. Here, Jason is a man with a sense of duty who truly believes he is making an advantageous move for his family. And Mark Fossen also gives a moving performance as a father who has just lost his only two children as the character grapples with the ultimate betrayal. Unsurprisingly for a couple married in real life, Mark and April Fossen performed well together, their scenes being the most charged and engaging.

While I enjoyed the Fossens’ performances, the chorus appeared to lack harmony.  Typically, in Greek theatre, the chorus can add a voice of reason, complement to a scene, and provide a welcome visual movement to a play full of dialogue. (In fact, the fantastic use of the chorus was one of the best aspects of Prometheus Bound, the last play I saw at the Greek Theatre Festival.) However, in this production, the chorus seemed out of sync, distracting, and poorly utilized in most of the scenes.  In some of Medea’s monologues, the chorus was haphazardly strewn about the stage sometimes in awkward stances, the choreographed movements appearing very poorly executed. In most scenes, I struggled to find a purpose in adding the additional noise.

There were, however, two exceptions to the choral confusion. The first occurred when the princess and king die of Medea’s poisons. In that moment, the chorus very compellingly acts outs and narrates the death. Second, in the final scene, the chorus sweeps around Medea as she takes her place atop a rock, defiant and victorious.  This was a well-executed visual complement of which I would have liked to see more in Stroud’s direction.

While not without flaw, there were some satisfying and successful aspects of this production.  I welcome the opportunity that the Classical Greek Theatre Festival presents to see classic works that are not often performed in Utah. It is well worth the time to make a visit to ancient Greece to see the leading performances in this production of Medea.

The Classical Greek Theatre Festival production of Medea plays at various locations, dates, and times in Salt Lake and Davis Counties through September 24. Tickets are $15. For more information, visit https://westminstercollege.edu/student-life/events-and-performances/performing-arts-events/classical-greek-theatre-festival/index.html.