SALT LAKE CITY – In traditional Neil LaBute style, In a Dark Dark House hinges on sudden twists in the story, and I’ll do my best not to let any spoilers out. The play opens with two estranged brothers meeting for what might be the first time in a while. Successful lawyer Drew (Lucas Bybee) has been incarcerated after crashing his car while under the influence of cocaine. Now undergoing therapy and rehab, he asks his elder brother, security guard Terry (Brandon Sean Pearson) to corroborate the story he’s telling his doctors: that he was sexually abused as a child. There are only three scenes in the play, and the first, between the brothers, unleashes a flood of emotion and baggage.

Bybee is particularly fine here, torn between mending the harm he’s wreaked and the expensive life he’s on the brink of losing. As older brother Terry, Pearson is a towering mass of brooding anger, just waiting for the right fuse to set off an explosion.

Also traditionally LaBute, the dialogue is natural and pedestrian, in some places to a fault. For example, Terry constantly chides Drew for using words like “dude,” “totally,” and “whatever,” trying to be younger and hipper than he is. The thing is, those words fit perfectly into Terry’s vocabulary and with his character; I had a hard time believing that he was so bothered by his brother’s word choice. LaBute’s scripts are also full of overlapping sentences, lines that trail off, and vague “you know”s. Ambiguity, while key to naturalism to an extent, gets in the way of the storytelling here. Suggestions are put forward, though dubiously, leaving the viewer to wonder what really happened. Some of the more vague moments in the play, it seems, are placed for shock value, to make the audience gasp and chill, when really they can’t be certain what exactly has occurred.

But the performances are the attraction here. Even if I didn’t completely understand the brothers, I felt a connection between them—a reminder of sorts that blood is thicker than water. Bybee and Pearson hold each other at arm’s length, eying each other warily, firmly attached as brothers yet distrusting of one another as men. The conflict between them is rich and meaty as they finally grapple with the years of resentment piled between them.

Sandwiched between two acts featuring the brothers is a scene that may seem out of place, as I must discuss it out of context: Terry befriends teenager Jennifer (Lexie Allen) on hole 13 of the mini golf course she manages. In stark contrast to the other two acts, the mood here is light and fun, though you can’t quite escape the idea that something terrible might be lurking underneath. Allen seems to enjoy playing the headstrong teenager who is not afraid to talk to strangers, especially the tall, good-looking, rough-around-the-edges kind of gent. It’s great to see a lighter, brighter side to Pearson’s Terry, and there is something perverse yet appropriate about a key scene in this play taking place on a mini golf course. Pearson and Allen have a fun rapport, though I got more of a big brother/little sister vibe than that of a potential romance.

Director Sam C. McGinnis V does a fairly solid job directing this tricky piece, keeping things moving and not letting anyone—the audience included—get comfortable. I do take issue with the choice to put up the show in the round, however. When I first entered the space and saw the seating configuration, I intentionally sat on one of the sides to make a fair assessment. For the most part, things work (Kit Anderton’s simple and effective set helps) though there were several moments where one actor would completely block another, especially when a strong look or expression was being employed instead of words. Lines were muffled and nearly lost, being harder to hear from behind an actor’s back; I realize the space is intimate and the story is powerful, but a little projection couldn’t hurt.

One choice that didn’t sit well was that of having Terry left alone on stage at the end of each act. I don’t know if this was McGinnis’s choice, or if it’s written into the play, but it felt a little heavy-handed to me: as if we needed to see Terry writhe in confusion one last time before we would believe he was actually troubled. It made Pearson’s performance feel like, well, a performance and not an organic occurrence.

In a Dark Dark House deals with issues that are difficult to talk about, from addiction to sexual abuse to homophobia. The performances make Wasatch Theatre Company’s current production worth seeing, and the story may haunt you long after it’s over. 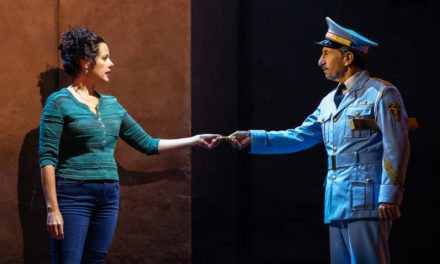 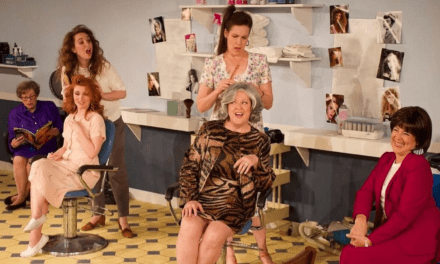 STEEL MAGNOLIAS is intimate and polished at the Covey