Pioneer Theatre’s THE MESSENGER is beautiful, relevant and weird

SALT LAKE CITY — “A Very, Very Loose Adaptation of An Enemy of the People by Henrik Ibsen,” Jeff Talbott’s The Messenger at Pioneer Theater Company is a beautiful example of a period piece with modern dialogue that feels historical and relatable. Talbott’s play, /i/, premiered at Pioneer in 2018, and the playwright certainly has a distinct voice.

In a small town in Norway in 1882, things are looking up, as the semi-recent opening of baths have brought in a lot of tourism and strengthened the housing market. However, findings from Dr. Therese Stockman may turn tourists away, so long as she can get her findings published. The Messenger explores the difficult choices made between family, editors, politicians, medical professionals, and average citizens.

Talbott’s script, combined with Wes Grantom’s direction, creates some wonderful world building. Exposition is understood over time with context, rather than being spoon-fed to the audience. One of the strongest parts of Grantom’s direction in this play is how real the dialogue feels—how you can see the thinking process behind everything the characters say. However, The Messenger does end up being a lot of People Yelling At Each Other, with little variation in the tone of the dialogue. The play is arguing all the way down, and after a while, it is difficult to pay attention to yet another argument, with nothing in-between. 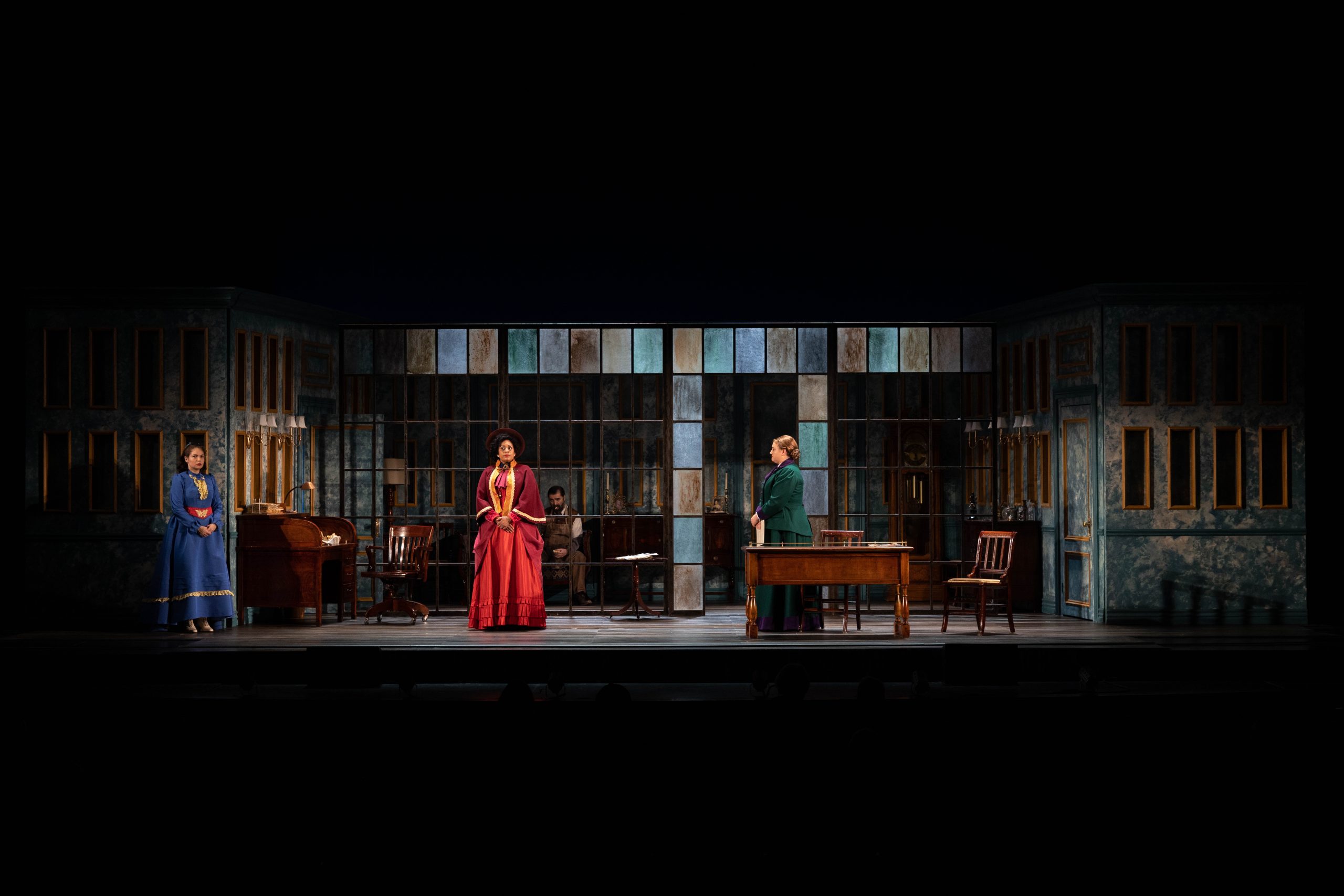 All the actors created characters who were real people, with close connections to each other and years of background. The characters I disliked made understandable decisions, and the characters I agreed with made poor judgements. Ora Jones’s Therese Stockman had a powerful presence and a remarkable character arc. I easily despised Mark H. Dold’s Peter, yet he was charming and funny. Meredith Holzman’s Hovstad was intelligent and demanded respect. As the lovers, Turna Mete as Petra and Grayson Dejesus as Einar went on such a fantastic journey that was so real. Finally, Barzin Akhavan’s Henrik was delightfully charming, and my favorite character to watch whenever he was on stage.

The first thing the audience sees on stage is the stunning green marbled walls of the house, designed by Yoon Bae. I loved this set so much, and the way the house turns into the office turns, into the stage turns, into the house, is absolutely genius. Bae also designed the costumes, with an excellent combination of historical accuracy and stunning colors. The attention to detail from Bae was incredible, especially on Therese’s asymmetrical skirt at the end. Throughout the play I was amazed at how beautiful the whole color palette of the stage was. 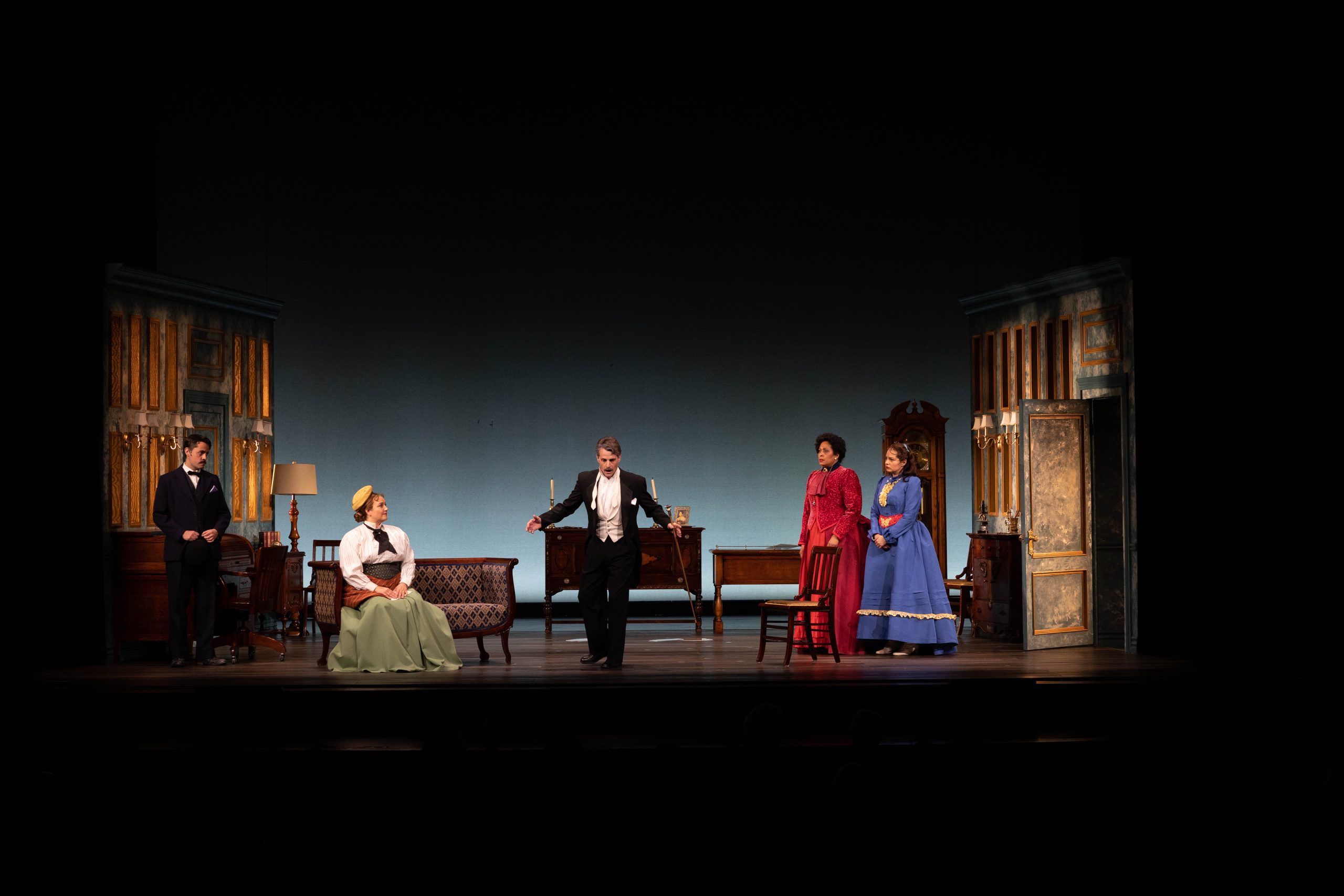 One of the very first notes I took was how much I loved Brian Tovar’s lighting design. I think the last time I saw a lighting design that struck me this much was during Talbott’s /i/ at PTC. From the moment The Messenger started, I was in awe of the lighting. I absolutely adored the details in the 19th century stage lighting, and there was a moment towards the end with such beautiful shapes, and angles, and colors that I really wish I could see again.

The original music by Will Van Dyke was lovely and reinforced Talbott’s play. In turn, Micah Lambert Maxson’s sound design blended beautifully with Van Dyke’s music. The music transitions between scenes was wonderful, and had a gradual, appropriate feeling. There were times when I wished there was white noise in the background—the silence was so silent—but I also understand that with the characters constantly yelling at each other, any additional noise would just create one big puddle of sound.

I have debated with myself how much I want to spoil the play. But I have one large gripe and one smaller gripe about The Messenger that completely spoils it. If you have not yet seen The Messenger, skip this paragraph. For the minor gripe: as relevant as the play is, I do not enjoy seeing Covid-related dramas right now because they make the audience too tense. But for a Covid-related drama, The Messenger does handle it very well. For the larger gripe: when leaving the theater, the friend I had brought and I both agreed that we would have loved the play, if it was not for the bit where the “audience members” interacted with the characters. I was taken out of the world of the play by how the twist was done. It was bizarre for a world of only six characters to suddenly be invaded by an unfamiliar woman in modern clothes coming out of the audience. And the scene turned into so much yelling that I could no longer pay attention to what they were saying. It was just more arguing, except now from characters that did not belong in 1882. I found myself wondering why this play needed to fall apart, and how the characters could go back to the world of the play after the “audience” was gone. Luckily, because of the gorgeous scenic, lighting, and sound transition back to the house, it was possible. But it felt like the arguments made by the audience could have been made without quite so much shock value.

I really enjoyed Pioneer’s production of The Messenger. Except for that one part. The show is beautifully adapted, terribly relevant, and stunningly designed. It is a script and a production that will stay in my mind for a long time. I really look forward to looking back at production photos of this one.

The Pioneer Theatre Company production of The Messenger plays Mondays through Thursdays at 7 PM, Fridays at 7:30 PM, and Saturdays at 2 PM through January 29 at the Simmons Pioneer Memorial Theatre (300 South 1400 East, Salt Lake City). Tickets are $33-55. For more information, visit pioneertheatre.org.