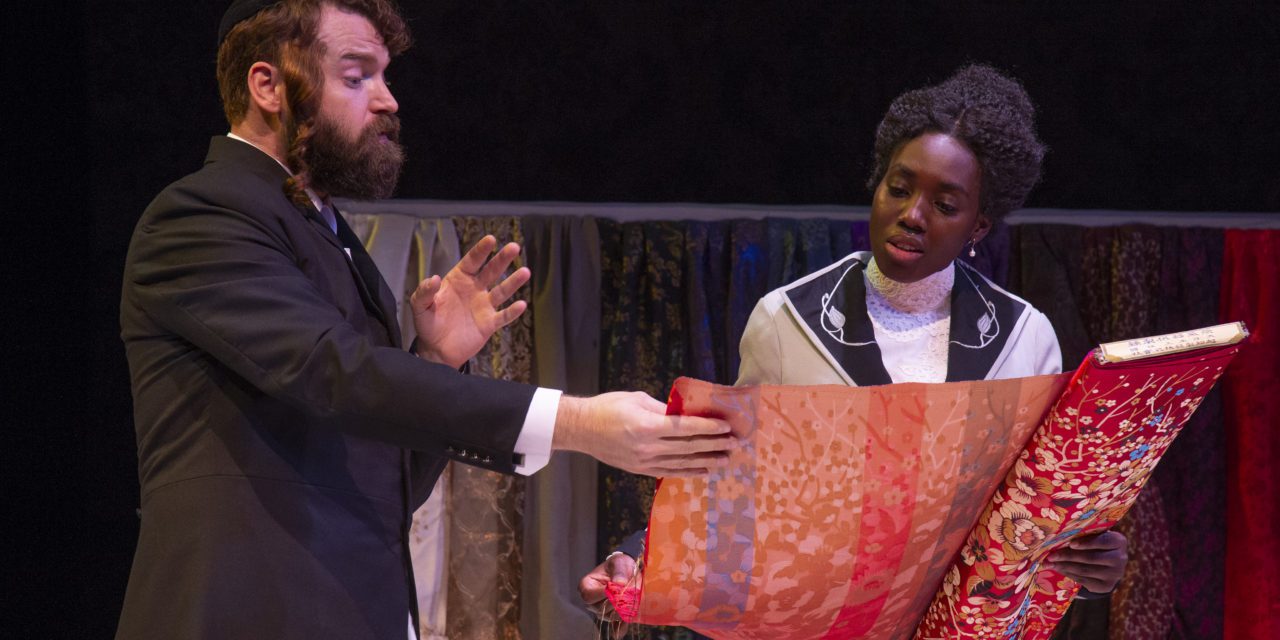 CEDAR CITY — Lynn Nottage is one of the most celebrated America playwrights of our time. I was thrilled to at last be seeing one of her plays produced not in New York or Los Angeles, but here, by one of Utah’s flagship companies, the Utah Shakespeare Festival. Intimate Apparel is not a title of Nottage’s I was familiar with, but as I walked into the Anes Studio Theatre, I was already applauding the Festival’s willingness to push their own boundaries by producing a play written, directed and performed by Black women. From what I can tell, this is the first time it its 60 years of productions that the Festival has ever produced a play centered on Black life.

Intimate Apparel tells the story of  the Esther, a Black seamstress in New York in 1905. (The production is also interesting as it is presented in repertory with the Festival’s production of Ragtime, and offers a contemporaneous view of what was happening in Manhattan.) Esther opens the play sitting at her sewing machine in the boarding house where she has lived as a single woman since arriving in New York as a teenager. Now 35, she is lonely, but sensible enough to be saving for her dream of opening a beauty parlor for women of color. Though she can’t read or write, she skillfully creates beautiful lingerie for both the wealthy wives of 5th Avenue and the sex-workers of the Tenderloin district. She is also romantically fascinated by the Hasidic man, Mr. Marks, who sells her fabric. However, her life grows more complicated when she receives a letter of courtship from George Armstrong, a man from Barbados who is a builder on the Panama Canal. Her friends help her to strike up a months long epistolary courtship, but if she agrees to marry George, will they really be able to make their American dreams come true together? 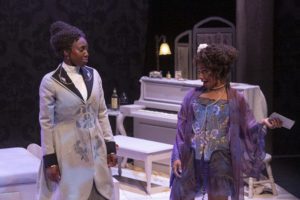 In many respects, the story wouldn’t need much adjustment to take place 100 years later in 2005. Lonely women like Esther still risk a great deal by falling in love with men like George who, from half a world away, are filled with charm and big dreams. Black business women must still deftly maneuver through the various cultures they work among. Ether’s ability to be simultaneously supportive and vulnerable in her relationships with the White wealthy Ms. Van Buren and Mayme, a lighter skinned sex-worker, show how little many of the gender, class, and racial distinctions that govern women’s lives have changed in a century.

Director Tasia A. Jones unifies the vibrant production around a monochrome grey pallet, perhaps reflecting the murky nature of the each character’s morality. The pale furniture also creates stark contrast for the vibrant flashes of Esther’s creations, (created by costumer designer Raquel Adorno) as well as a precious quilt that she has pieced together with the scraps of the beautiful work she has lavished on her clients. 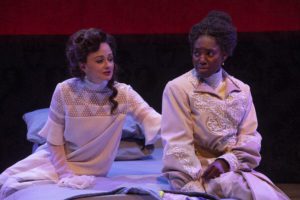 I offer high praise to each actor in six person cast. Each excelled, performing with touching humanity and generosity toward one another and the audience. Afua Busia shines as Esther. She is by turns tender and unflinching. Busia may, however, be altogether too beautiful to be playing a character whose plainness is a plot point. Jasmine Bracey, as Mrs. Dickson, Esther’s lively but practical landlady offers a great deal of comic relief to the show and is a particular pleasure to watch.

Despite my praise, I left the theater disappointed in Nottage’s play. While each character is brought to life with specific details and interesting backstory, the dialog is clear and evocative, and the performances are stellar, I am left baffled by the plot. While a lack of clear motives and poor decisions can sometimes be dismissed a legitimate human failing, the playwright is not excused for leaving me bored by lack of consequence. As an example, at a critical moment of confrontation, Nottage ends a scene with a pivotal character left knocking outside the door. How I longed for Esther to fling the door open and to have the fight that she deserved. How I wished the villain could have a moment to face the shame and pain they had caused. Perhaps like, Iago, to walk away with a cold and calculating calm, or like Othello to be humiliated, humbled and repentant. Either would do, but something is needed. Instead the audience is left without resolution. 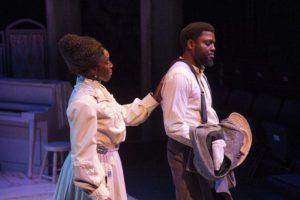 But it is not just the villainy that feels incomplete. As mentioned earlier, Esther has been saving for her grand dream carefully for 18 years. And yet, other than dreamy talk, she seems to have made no practical plans to turn this dream salon into a reality. I want to know how much more money does she need for a down payment. Why not invest some saving into hiring an evening reading tutor? Why does it seem that she, who is so careful and wise, has not considered such basic questions. George has similar grand dreams but seemed unable to plot a path to achieve them. Mayme, the sex worker is perhaps the exception, as she explains how her dream of becoming a musician was previously thwarted, but even the twist in her character during the show’s second half seems far afield from her previously stated understanding of the world. I suppose Nottage intends all these irrational choices to add up to the humanity of these characters, but for my taste it came off as illogical and lacking in resolution.

Nevertheless, I repeat my enthusiasm for the performers, the production quality, and especially the choice to directly explore a story like Intimate Apparel that centers Black women and their lives.

The Utah Shakespeare Festival’s production of Intimate Apparel plays various dates at 2 PM or 8 PM through October 9 at the Eileen and Allen Anes Studio Theatre on the campus of Southern Utah University. Tickets are $49-59. For more information, visit bard.org. 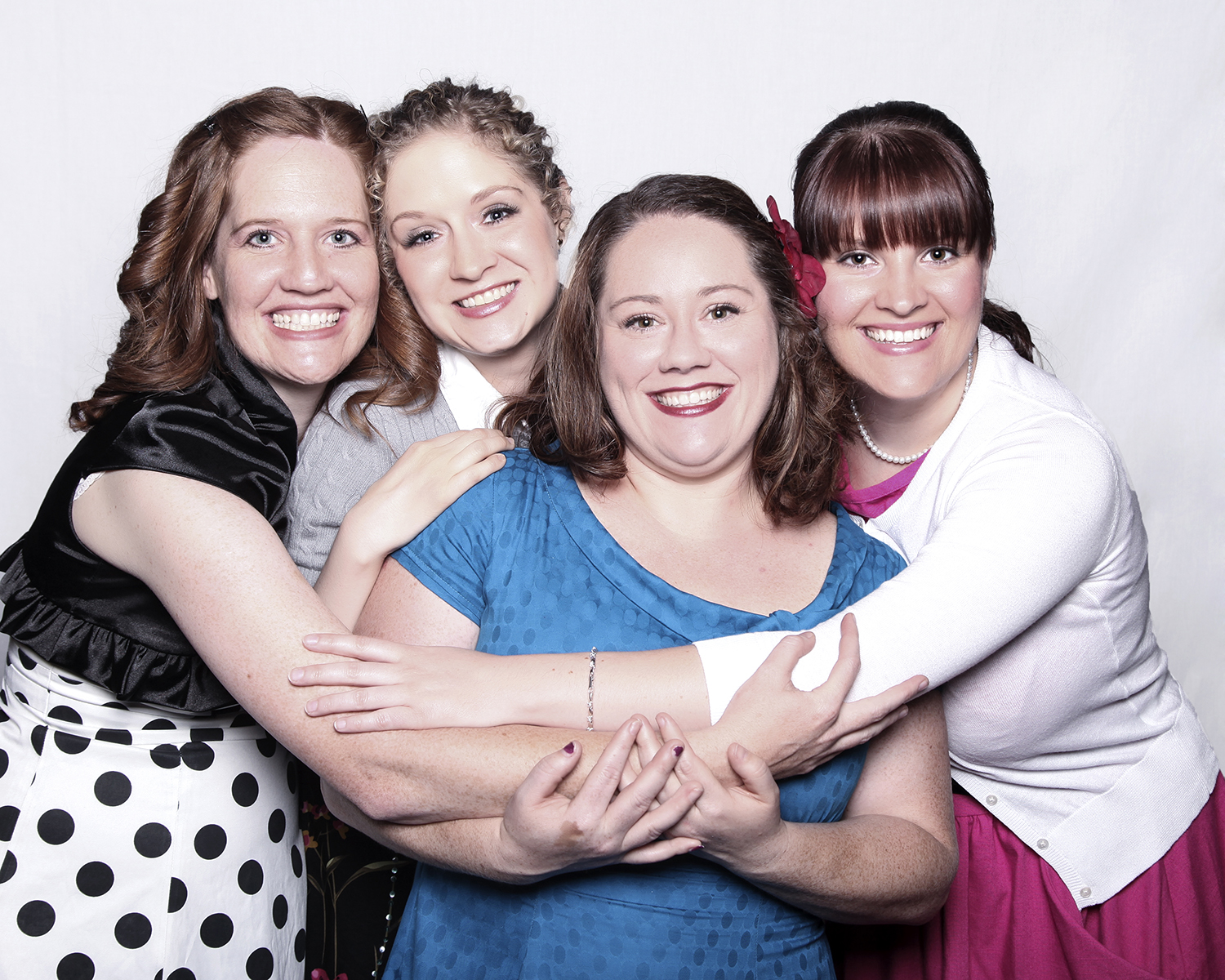 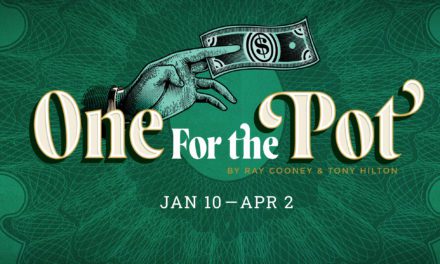