MURRAY — The UTBA reviews a wide variety of productions, and, in my reviewing experiences, I’ve been in the audience for a good mix of shows.  So, as I attended Murray City’s The Scarlet Pimpernel, I found myself wondering what scale or standard I should use to measure up this particular performance.  Should I divide plays up into amateur and professional categories?  Perhaps, I might compare musicals only with other musicals?  What about a classic versus a contemporary script?  To what am I comparing this production?

I was a little perplexed.  My husband, who has been my companion for many a review, compared it simply to those plays we had together seen.  And it didn’t fare well.  My heart, though, has been softened a bit by my own experiences in community theater.  When things were getting “iffy” in this show, I tried really hard to look for the good.  Maybe that makes me a sap.  But, it is by that completely subjective standard that I compose this review.

Set in the times of the French Revolution, a pretty actress marries an Englishman and they begin a life together.  Quickly though, they start to doubt their love and familiarity with one another.  The husband, Sir Percival Blakeney (Cameron Boyle), thinks his wife is aiding the corrupt French government, while he is risking his life, saving French citizens, and masquerading as the Scarlet Pimpernel.  His wife, Marguerite St. Just (Rebekah Law), feels she has lost her dear Perci and has no idea why.

The plot sounds intriguing enough, but sadly, it felt long and poorly executed.  The acting was not good; I feel totally harsh saying this, but truly, the comedy was the only saving grace for this show’s actors.  Each lead seemed to cover only one emotion, credibly: Law pulled off sad just fine, and Chauvelin (Jacob Shamy) got the angry part down, while Perci displayed the ridiculousness.  But when Perci tried to convey anguish, as in “Where’s the Girl?”, he was too over the top and it didn’t read true.   The same applies to Marguerite and Chauvelin–they could have created more well-rounded characters.

The show’s beginning was a mess; the dialogue was rushed, the stage direction was scattered, the character and plot development was unmemorable.  What I do remember is that 20 minutes into the show, Perci is crushed, seemingly broken-hearted, and my reaction was, “What?!”  It was so abrupt and so unbelievable, because the love and connection between Perci and Marguerite was never there, at least not that I perceived.  Soon after, Marguerite sings a (could be) moving song, called “When I look at you.”  But all I could feel was frustration, because the song would have meant so much more if there had been a bond (a spark, some passion maybe?) between Perci and his wife.  In the song, she asks if maybe she never even knew him, and that’s what I felt like, as well, since they only had a few minutes of happiness together.

The villain of the production was Chauvelin (Jacob Shamy).  He was a talented actor and I was excited, in the beginning, to see that he had some dimension.  But the play got so long, and Shamy’s solos felt like the same thing over and over; the character became tiresome.

The strong points of Karyn Tucker‘s direction are the music and the comedy.  Despite the one or two moments when the orchestra overpowered the dialogue, in general, that group of musicians (led by orchestra conductor Stephen Voorhees) did a fantastic job.  They added intensity and momentum to the show.  In fact, I felt excitement in the duel between Perci and Chauvelin, when the scene might have felt dull and empty without the band.  I heard them out of tune only once, during the ball.

Each of the three leads was strong vocally.  Rebekah Law as Marguerite St. Just showed great professionalism in the way she handled her illness/losing her voice.  She covered it well and her musical numbers were outstanding anyway.  Near the end of the show, as she sang “I’ll Forget You,” it actually added to the emotion of the song.  She has such a warm tone; I really enjoyed listening to her.  Also worth mentioning is the men’s ensemble, or Perci’s band of men; they made a terrific choir: they were cohesive and had wonderful harmonies.

This production owes a lot to its comedy, which didn’t really show up until nine scenes in.  The first scene that I enjoyed the acting and pacing was “Into the Fire,” with Perci and his friends.  The chemistry of the group and the timing of the jokes made it a very enjoyable to watch.  Perci and Chauvelin had a great banter going throughout the show; they made us laugh as Perci drove Chauvelin nuts. Humor is one area where the actors did not struggle.  My husband enjoyed “Creation of Man,” when the sneaky Englishmen dress fancily for the ball, using their silliness as a cover for their actions.  (“And that is why the Lord created men,” was a great line!)  Another cute scene was “Who is the Scarlett Pimpernel.”  There is a women’s ensemble dressed in adorable housemaid costumes (my favorite of the show, Pat Morley) chatting about the rumors they’ve heard; it was a fun scene, with interesting characterizations.

There were a couple things that kind of bugged me, just because they didn’t seem logical.  A large fold-down boat (Jeff Davis, set design) was built for this production, and I’m sure it took a lot of effort, but it spent less than 5 minutes on stage—a few in the first act and a few at the end.  One time, Perci tells his men to, “Ready the ship,” but it doesn’t really happen.  (“Psyche!”)  I think they should have spent more time on a fake carriage for the pivotal moment of Marguerite discovering her husband’s true identity, which was a surprisingly great moment, but looked odd in that cut-out carriage.  Also, after Marguerite is arrested and thrown into jail, why does she suddenly appear in a different outfit for her prison song?

The musical itself presents a lot of hurdles for a director, but I feel that the cast put in a lot of work and deserves to be given credit.  The acting wasn’t impressive, but it was still a mildly entertaining night at the theater, with a dash of ridicule and a good dose of song.  Days later, I still have one number in my head: “I’ll forget you” was a picturesque scene.  The sun had finally set in Murray, and the stage was dimly lit on the group of hunched prisoners awaiting execution.  Marguerite’s voice was haunting and emotional.  The moments that I enjoyed in this show, I am glad to have seen.

Hale’s THE GAME’S AFOOT: Oh, what a difference a script makes 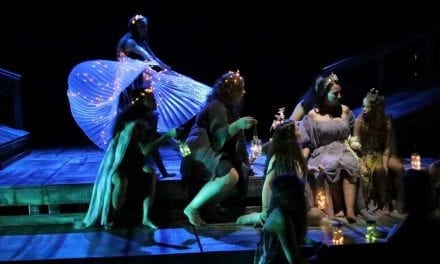